The Peerless Prognosticator is ON THE AIR!!! -- Game 8, Capitals at Oilers, October 27th

The Caps depart the Eastern time zone for the first time this season, not to mention the amber waves of grain and purple mountain majesties of the good ol’ U.S. of A. They are on the road to Edmonton, the capital of the Province of Alberta and that province’s second largest city. It’s nickname is “Festival City,” because of what the city notes is its abundance of successful festivals. However, the name, “Edmonton,” is a Latinized version of a Saxon word meaning "Happy Hamlet,” and was used to honor the home of Hudson Bay Company governor James Winter Lake who was from Edmonton, England. We think “Happy Hamlet” was really a goalie for the Montreal Maroons.

But perhaps most interesting about Edmonton is that it has a “poet laureate.” The City of Edmonton describes the position thus…

“The role of a Poet Laureate is to reflect the life of a city through readings of poetry. As an ambassador for the literary arts, the Laureate incorporates poetry into a range of official and informal city activities. The creation of this position confirms the city's support for the arts in general, and for the literary arts in particular. A jury, assembled by the Edmonton Arts Council, selects a new Poet Laureate every two years.”

It pays, too! $5,000 (CDN) for each year as an honorarium. The position is currently held by Anna Marie Sewell, who has been active in Edmonton cultural life for two decades. But it might be her predecessor who is a bit more interesting. A gentleman by the name of “Roland Pemberton” ended his two-year tenure as poet laureate this past July. He was, and is, a musical personality of note in that part of the world, having been nominated for the 2006 Polaris Music Prize, which awards $20,000 for the Canadian album of the year. He was also named by Chart magazine as one of the 15 Canadian artists to watch in 2006. The thing is, though, not many folks know “Roland Pemberton” the musician. Maybe they know him by his stage name... “Cadence Weapon.”

Well, the Caps take their considerable weaponry to Rexall Place tonight to take on the Edmonton Oilers. Two teams in very different stages of their development, the Oilers are what the Caps once were – a team with a deep, yet green pool of talent that will make its share of mistakes now, but that will be formidable in a few years. Here is how the two teams stack up so far… 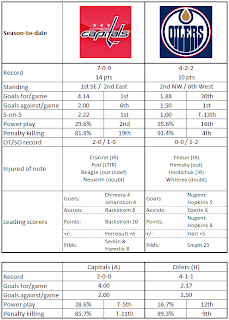 2. Much has been made of the goaltending in Los Angeles and the penalty kill in Pittsburgh. Both have been fine. But Edmonton is allowing 1.50 goals/game through eight games (tied with the Kings) and has a 91.4 percent penalty kill (rank: fourth). The Oilers have killed off their last 22 shorthanded situations.

5. Edmonton protects its kiddie line. The trio of Nugent-Hopkins, Hall, and Eberle all have offensive zone starts at 5-on-5 over 60 percent. Interestingly enough, only Eberle is over 50 percent in offensive zone finishes (numbers from behindthenet.ca).

1. Balance…going into Wednesday night’s play, the Caps led the league in scoring (4.14 goals/game) but had only one player in the top 33 in points (Nicklas Backstrom). They had seven in the top-100, though.

2. Lean, Mean, but Fightin’ Clean. The Caps are the least penalized team in the league in minutes per game (8.1), barely half of that which Edmonton sees (15.1).

3. One of the things Caps fans might have been wishing for was having the top line of Nicklas Backstrom, Alex Ovechkin, and Troy Brouwer (or Mike Knuble) start more often in the offensive zone. Well, through eight games Backstrom and Ovechkin are each at 50.0 percent, and Brouwer is at 51.1 percent at 5-on-5 (numbers from behindthenet.ca).

5. The Caps have the best takeaway-to-giveaway ratio in the league (1.80:1). They lead the league in takeaways (88), and only three teams have fewer giveaways (49).

Picked first overall in last June’s entry draft, “RNH” leads all rookies (as of Wednesday) in goals and points, is tied for the lead in power play goals, is tied for third in plus-minus, has one of only five game-winning goals scored by any rookie so far this season, leads all rookies in shooting percentage (for rookies with at least two shots on goal), and is tied for first among all rookie forwards in ice time. Nice start. No surprise, since he hails from Burnaby, British Columbia, which is quite the well-spring for talent – Joe Sakic, Darren McCarty, Glenn Anderson, and of course, Caps defenseman Karl Alzner.

So far this season, Ovechkin has scored all three of his goals in two road games. He is 5-3-8 in five career games against the Oilers. He is also 2-3-5 in his last three games. But there is this odd fact. Last season in those instances in which he played in the first game on the road after a game in Washington (a total of 23 games), Ovechkin was only 4-15-19, plus-2. In 18 other road games he was 14-10-24, plus-8. While true that the Russian Machine might never break, sometimes he needs a bit to get started when on the road.

1. Win the War of Wills…early and late. Edmonton has allowed the fewest first period goals in the league so far this season; only one team has scored more first period goals than has Washington. Only three teams have allowed fewer goals in the third period than Edmonton; only two teams have scored more third period goals than has Washington. Who imposes whose will on whom in this area will be an indicator of whether the Caps have brought their “A” game.

2. Win the War of Wills, Part II. One area in which the Caps have struggled some is in shots allowed. Only five teams have allowed more than the 32.7 shots per game the Caps have given up so far. On the other hand, Edmonton ranks 23rd in shots on goal per game. More to the point, Edmonton is 3-1-0 when outshooting their opponent, 1-1-2 when they don’t. Edmonton has played two Eastern Conference opponents so far (Pittsburgh and the Rangers), outshooting both and beating both.

3. Win the War of Wills, Part III. The Oilers have killed off 22 straight shorthanded situations. The Caps have power play goals in five straight games and are 6-for-15 doing it (40.0 percent). How this ends might turn on opportunities. The Oilers haven’t allowed more than five power play chances to opponents since their season opener. The Caps have had more than five chances only once in this five game power-play goal streak.

This is another one of those “no peeking” games. The temptation is to look ahead to the game in Vancouver on Saturday. Edmonton is spunky enough to make the Caps pay for that. At 4-2-2 so far, they are hardly a doormat. But this game should turn on the Caps depth against the Oilers being what amounts to a one-line team. In eight games the Oilers have faced only one team that poses a consistent threat on offense – Vancouver (twice). Four opponents (Minnesota twice, Nashville, the Rangers, and Calgary) rank in the bottom ten in offense. The Caps are several weight classes above that group, and that is going to serve as a rude awakening for the young Oilers.