The Peerless Prognosticator is ON THE AIR!!! -- Game 66: Washington Capitals at San Jose Sharks, March 9th

If it’s Mid-March, it’s time to heed the advice of Horace Greeley and “go west, young man” if you are a Washington Capital. The Caps head to the left coast this week for the annual California roll through San Jose, Anaheim, and Los Angeles. On Thursday night they open the visit by facing off with the Sharks in San Jose.

Most Caps fans know by now that Washington has not won a game in regulation in San Jose since October 30, 1993. “Dreamlover” by Mariah Carey was the top single that week. “The Bridges of Madison County” by Robert James Waller was the best-selling book in fiction, while “Private Parts” by Howard Stern topped the non-fiction book list. “The Nightmare Before Christmas” was the number one movie.

As for the Sharks, they are quietly assembling quite a season. They have the seventh-best record in the league (39-19-7/85 points) and have won four of their last five games going into this contest with the Caps. Stinginess on defense has been their calling card lately. Only once in their last ten games have they allowed more than three goals, and only twice have they allowed more than two. They allowed just 20 goals in those ten games, six of them in a 6-5 overtime loss to the Florida Panthers on February 15th.

The stinginess is due in no small part to goaltender Martin Jones. Only four times in 53 appearances this season has he allowed more than three goals in a game, and since the last time he did that (he allowed all six goals in the loss in the 6-5 overtime loss to Florida), he has stopped 106 of 112 shots (.946 save percentage) in compiling a 2-1-1 record over four games. Since taking on the full time goaltending duties with the Sharks last season after being traded there by the Boston Bruins (four days after being traded to Boston by the Los Angeles Kings), Jones has won more games in goal than any netminder in the league (67, tied with Devan Dubnyk) except for the Caps’ Braden Holtby (82). And here is your odd Martin Jones fact. No netminder has played more minutes over the last two seasons than Jones (6,892), and he has no penalty minutes. The next highest ranked goalie in minutes played with no penalty minutes over the last two seasons is Tuukka Rask (6th in minutes played with 6,654). If the Caps score on this guy, they might want to save the puck. Jones is 3-0-, 0.67, .975, with two shutouts in three career appearances against Washington.

Moving out from the crease, there is Brent Burns, who is putting together quite a season of his own, but mostly at the other end of the ice. Although he has played in just 65 games to date, he has the 14th-highest point total for a defenseman (67) in the post-2004-2005 lockout period. His 27 goals is the second highest over the period (tied with his own total from last season), trailing only the 31 goals posted by then-Capital Mike Green in 2008-2009. He is on a pace to finish the season 34-50-84, which would be tops in goals and points in this era for defensemen. He is without a point in his last two games, but that comes after a seven-game points streak (5-5-10, plus-10). In 13 career games against the Caps, Burns is 6-6-12, plus-2.

Joe Thornton has always been much more a set-up guy than a call-my-own-number goal scorer, but his goal scoring has tumbled dramatically this season. He has five goals through 65 games, and that 0.08 goals per game production is his lowest over a season since his rookie year in Boston in 1997-1998 (0.05 on three goals in 55 games). This comes off a 19-goal season, more than he had in any season since he recorded 21 goals in 2010-2011. What might be more of a concern, though, is his assists are down. From his rookie season through last year, Thornton had more assists than anyone, and it wasn’t close (964 assists to 752 for Jaromir Jagr). With 36 helpers in 65 games so far this season, Thornton is on a pace to finish with the fewest assists he had in a full season (45) since he had 25 in 81 games in his first full season with Boston in 1998-1999. It would be the fewest he ever had in a full season with the Sharks. He was showing signs of increasing his production, going 2-4-6 over a five-game stretch last month, but he is 0-2-2 in his last six games, one of those assists being the 1,000th of his career, coming on an empty net goal that would become the game-winner against Winnipeg last Monday. Thornton is 16-29-45, plus-11, in 42 career games against the Capitals. 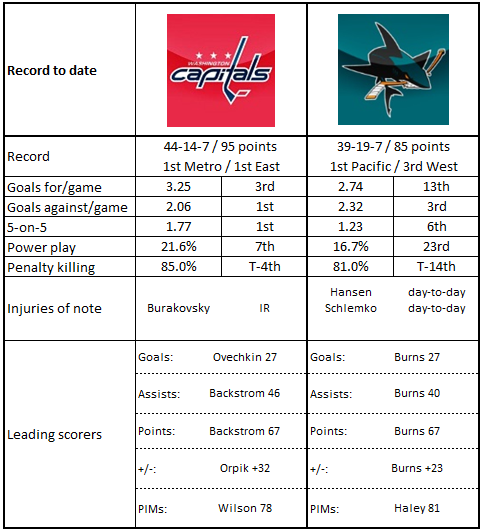 1.  San Jose just hums along. Since the start of the new calendar year they are tied for third in points earned (38, with Chicago) and sixth in fewest goals allowed, but they are not doing it with special teams. San Jose is just 22nd in power play conversions (15.8 percent) and 26th on the penalty kill (76.8 percent).

2.  Those numbers do not get any better on home ice. The Sharks have just the ninth best record in teams of points earned on home ice since January 1st (18, with four other teams), they are 29th in home power play efficiency (8.3 percent, ahead of only the 5.9 percent New York Rangers), and their home penalty kill is ranked 26th (75.8 percent).

3.  San Jose is not a particularly explosive offense. Only three teams have scored five goals in a game fewer times than the Sharks (5) this season : Arizona (4), New Jersey (4), and Colorado (3).

1.  The Caps are one of three teams with two players having 30 or more points since the start of the calendar year. Nicklas Backstrom (37, tied for the league lead with Boston’s Brad Marchand) and Evgeny Kuznetsov (32) have done it for the Caps. Marchand and Patrice Bergeron (31) did it for Boston; Patrick Kane (33) and Jonathan Toews (30) have done it for Chicago.

3.  Of the top-ten players in plus-minus since January 1st, the Caps have eight of them (Orpik, Connolly, Alzner, Orlov, Eller, Kuznetsov, Carlson, Williams). If you count ties at the bottom of the top ten, the Caps have nine of the top-12 (add in Matt Niskanen).

4.  If you want to compare defensemen, there are those 27 goals Brent Burns has for San Jose. “Defensemen,” as in “all of them,” have 20 for the Caps.

5.  The Caps are 15-1-0 at home in 2017, but their road record is a lot more pedestrian. They have 18 points since January 1st (tied with Edmonton for seventh-best in the league). Their special teams are uneven, the power play tied for second with Toronto on the road since January 1st (28.2 percent), while the penalty kill is tied for 18th with Pittsburgh (78.0 percent).

Marc-Edouard Vlasic has put together a nice career with the San Jose Sharks. The 2005 second round draft pick ranks tenth among active defensemen in games played since he came into the league in 2006-2007 (797) and only one of three in the top ten to do it having played for just one team in their career (Chicago’s Brent Seabrook and Duncan Keith are the others). He has not been a particularly prolific offensive player (his 247 career points ranks 40th among active defensemen), but with a generally successful Sharks team, his plus-minus reflects that success (ranked third in that group at plus-127, behind Keith and Zdeno Chara). His offense this season has been in line with his career numbers in goals, assists, and points, but his plus-2 is the lowest he has had since he was minus-12 for the 2007-2008 Sharks. He has one point (an assist) in his last seven games and is even over that span. In 14 career games against Washington, Vlasic is 3-3-6, plus-8.

It has only been four games, and it is only 31 minutes of 5-on-5 ice time, but Kevin Shattenkirk and Brooks Orpik have made a nice pair at 5-on-5 with a Corsi-for of 55.00 percent, the fourth-best of any defensive pairing for the Caps with that many 5-on-5 minutes played together (numbers from Corsica.hockey). On his own he is at 53.51 percent, second only to Matt Niskanen (54.16 percent) among Caps defensemen. This suggests that he is doing the fundamental things to contribute to success, even if his early numbers do not sparkle (0-2-2, minus-2 in four games). Of particular importance to this game and this week is that Shattenkirk has done quite well against the California teams, going a combined 8-24-32 in 57 career games against Anaheim, Los Angeles, and San Jose. He is 5-11-16, even, in 20 career games against the Sharks. Oh, and pondering Shattenkirk is a chance to ask if Shattenkirk and comic Jay Mohr were twins separated at birth… 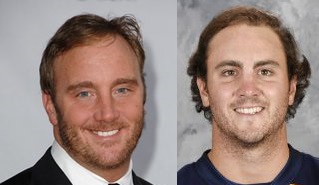 The Caps have built a lead in the league standings this season, but it has not been a product of their performance on the road. It is not a bad record, mind you, but their 17 wins ranks tied for ninth (with Ottawa and Boston), and their 40 standings points is tied for seventh (with Calgary, Montreal, and Boston). Going out to California is never an easy chore for this, or any other Eastern Conference team, for that matter, but this is a chance to take stock on just how far this team has come and how much further they have to go to raise confidence that they can go deep in the postseason. The Caps get what is probably the most difficult of the three opponents first in terms of the regrettable history of success (or lack of it) and the quality of the team they will face. Winning will take being at the top of their game, something we haven’t seen as much of from the Caps this month as we did last.