At the risk of taking Emerson a bit too literally, it is probably fitting that Michael Latta wears red in his occupation as a hockey player.  He was not the headline player in the trade that sent Filip Forsberg to Nashville for Martin Erat, but he is the player coming from Nashville who remains with the club.

Yes, red seems to be an appropriate color to wear as a reflection of his spirit.

That said, the extent to which he passes Jay Beagle on the depth chart as fourth line center is going to hinge at least as much on his performance numbers.  Twice he has posted 14-goal seasons in the AHL, both times doing so in fewer than 55 games.  Then again, Jay Beagle had 19 and 16 goal seasons with Hershey with game totals in each season in the mid 60’s.

The Caps were 9-6-2 in the 17 games in which Latta played last year.  Records like that aren’t attributable to the difference making capabilities of a fourth line center, but he was on ice for only five goals against in those 17 games, too, four at even strength.  He was 52.2 percent on draws.  He was charged with just two giveaways in 131 minutes of ice time.  He committed only one minor penalty.  He was not what you would call a liability out there.

Twice in 17 games he played more than 10 minutes.  He averaged less than eight minutes a game.  The Caps were 5-4-2 in games in which he played over seven minutes.  There is just so much a guy playing that little ice time can do to influence an outcome for the better.

The Big Question… Is Michael Latta a diamond in the rough?

Michael Latta is only 23 years old as he heads into the upcoming season, so it is still difficult to project just what his upside is.  Just keep in mind that he was taken in the 2009 draft ahead of Cody Eakin (72nd overall; Eakin was taken 85th), and Caps fans probably still remember Eakin, a prospect traded with a draft pick for Mike Ribeiro back in June 2012.  We cannot say with much conviction that Latta is going to become the scoring forward that appears to be slotted for in Dallas, but he might have more upside than Jay Beagle, which is not to denigrate Beagle.  Latta just has not yet had much playing time, and he seems likely to make a battle out of the fourth line center position.

To us, Michael Latta impresses us in his limited exposure to date with the Caps as a stockier version of former Capitals forward Matt Bradley.  He does not seem to be the sort to contribute a lot at the offensive end, but he might pot the occasional goal.  He plays at  a high energy level.  He is not shy about settling matters on the ice on his own (two fights in 17 games with the Caps, 11 in 52 games at Hershey last season).  He has not yet revealed any particular liabilities on defense, although 17 games is not much to go on in that regard.

Michael Latta is the last remnant of the Forsberg-Erat trade and the end of a line in the legacy of the selection of Scott Stevens in the 1982 draft (the “Brendan Witt/Filip Forsberg” line in this chart).  Latta represents the last active line in that legacy.  Caps fans will be hoping it does not end for a while yet.

Posted by The Peerless at 10:08 PM No comments:

Washington Capitals Training Camp 2014 got underway yesterday at Kettler Capitals Iceplex, and Day One was the kind of affair that could not be held to just one squad or just a single rink.  Three squads – Blue, White, and Red in that order – on both the Arlington and Capitals rinks made for a busy day for new head coach Barry Trotz, his staff, and the 60-odd players invited to participate.

Before Team Blue kicked off the first session at 9:30, however, there was goaltenders coach Mitch Korn on the ice with Braden Holtby and Pheonix Copley going through some drills.  Korn started working with Holtby, the first player on the ice for this year’s camp, going through what looked like puck handling drills that focused on the goalie’s footwork and body positioning when moving the puck along either side.

Copley joined in for some work in moving back and forth, up and down in the crease.  Then it was time for the ol’ medicine ball, one of many props that Korn uses for effect and to keep things interesting.  There were two drills involving this prop.  First, the goalies held the ball to their chest while maneuvering back and forth across the crease.  Then, while clutching the medicine ball to their chest, Holtby and Copley started at the goal line at one wall, then pushed off their skate down the length of the goal line to the opposite wall.  We were sore just watching them.

As this drill was underway, the skaters took the ice, and if there was a word to describe them as a group, it would be “business like.”  There wasn’t a smile among them, no chatting as they skated, no joking.  If you are looking for good (if trivial) signs about this team, there’s one.  They were down to business from the first blow of the whistle from Trotz.

Trotz wasted no time in pitting players against one another.  Using various combinations – one on one, two on two, and a series of odd man combinations – he had the players going against one another in long skate confrontations and in tight space situations starting in the faceoff circles.  Except for the occasional player sidling up to a coach for a question, the only sounds you heard on the ice were Trotz’ gravelly shouts and what seems to be a signature effect, his banging his stick on the ice to get players to step up the pace and hustle back into line after finishing a rush.

Because you might be wondering, for what it’s worth, watching Brooks Laich do end-to-end skates in the first half of the morning session, he looked pretty smooth out there.

Team Blue spent 45 minutes on the Arlington Rink before heading across the hall to the Capitals rink to complete their session, a series of end to end long skates to test endurance.  There were a few noteworthy things in that session.  Jay Beagle was consistently ahead of his group from end to end.  Alex Ovechkin was, well… he was not.  Dmitry Orlov and Aaron Volpatti wore the yellow (no contact) jerseys in doing the endurance skates.

Then there was Marcus Johansson.  We did not see what happened, but we did see him face down on the ice in front of the players’ bench, then get up to considerable distress to take his place on the bench.  After some limping around and being bent over the back of the bench, he headed off to the locker room.

Team White was next up on the Arlington Rink at the 11 o’clock hour.  Trotz took the group through the same drills, emphasizing player-versus-player contact and a fast pace.  And, there was the stick banging.  Just like the group the preceded them, there was not much player-player chattering on the ice.  Trotz appears to run a very disciplined, very ordered ship.  Some other things we took note of in Day One (with pictures).
-- A quiet moment between teacher and pupil before the fun begins… 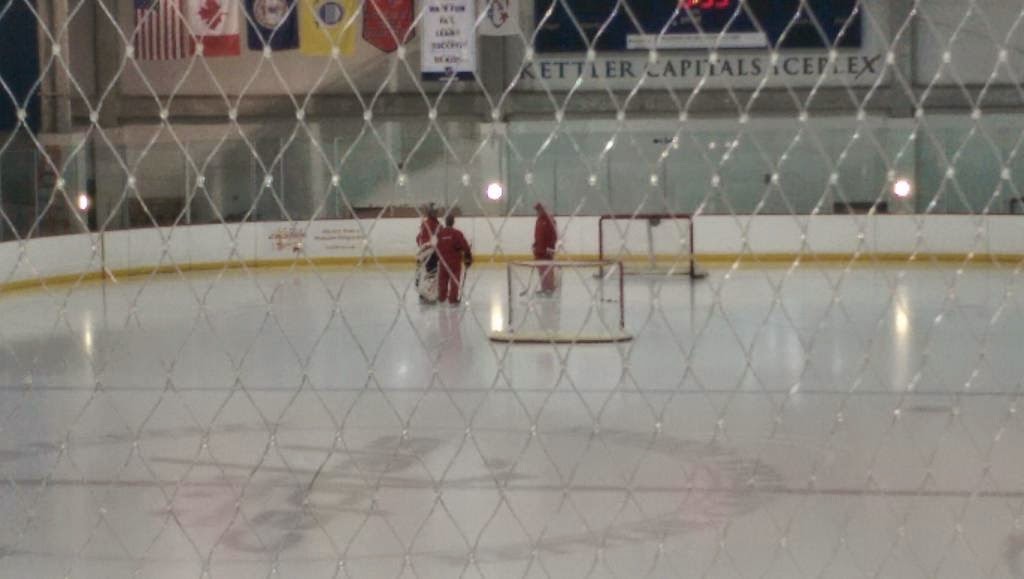 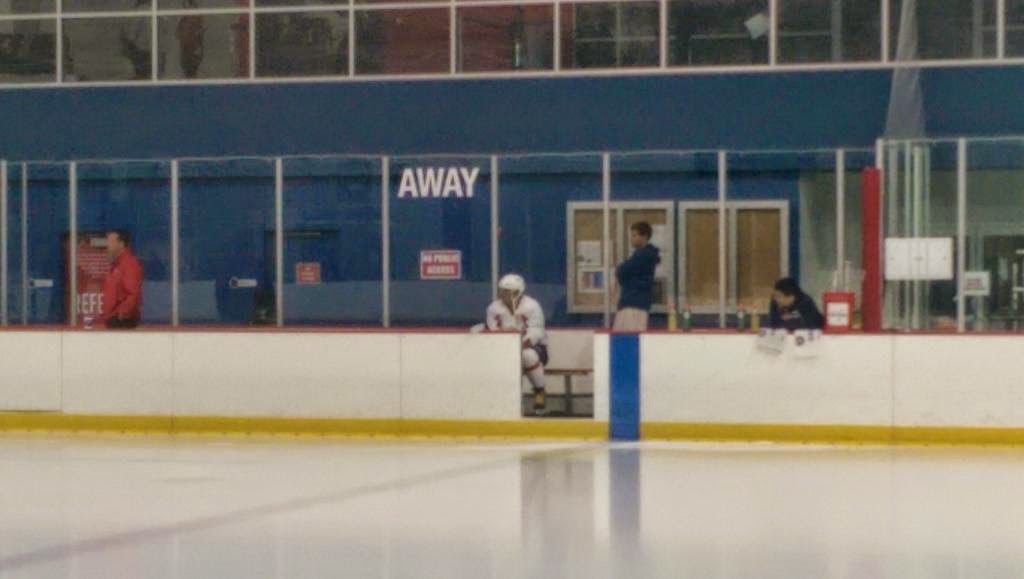 -- Then there were the footwork drills for the goalies... 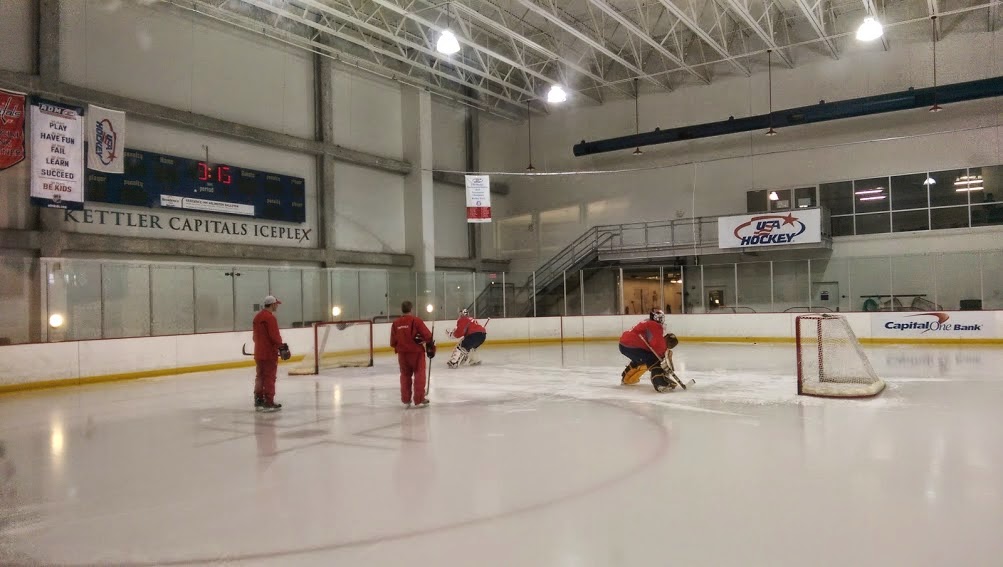 ...and the medicine ball drills. 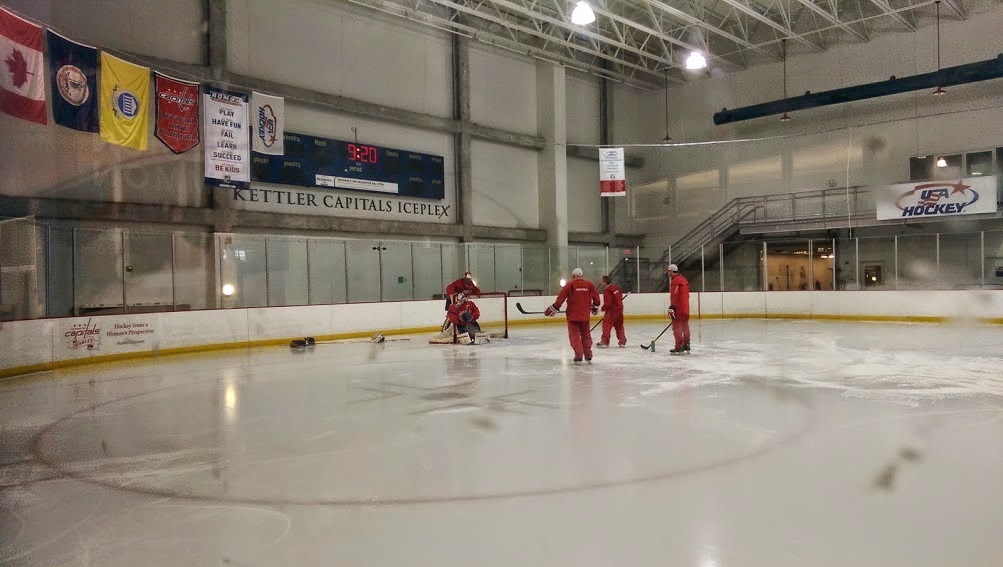 Leaving the one-on-one drills to the players. 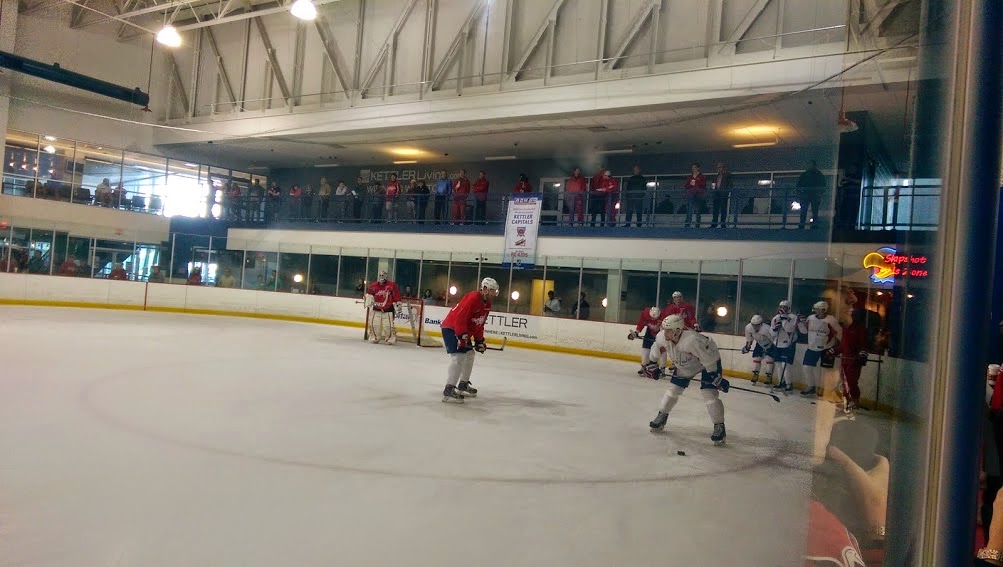 Not Sidney Crosby (save it for the fantasy piece, Peerless).  It's Liam O'Brien, although he is from Nova Scotia, and he did once play for Rimouski. 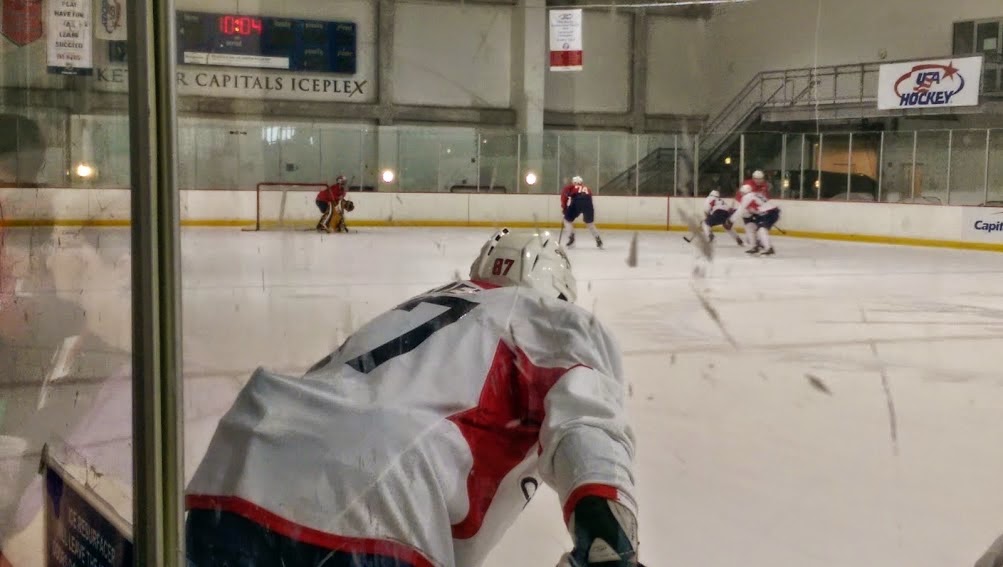 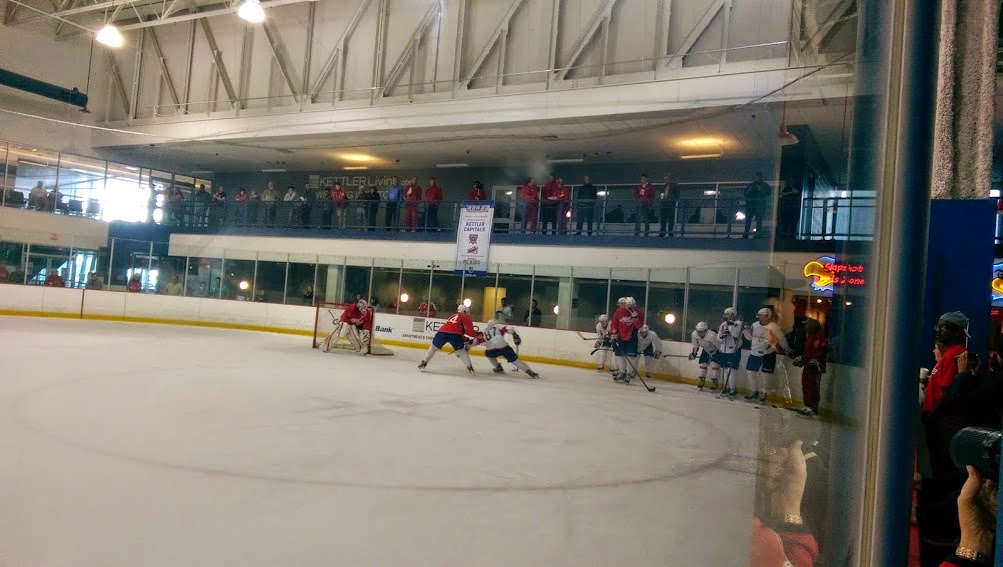 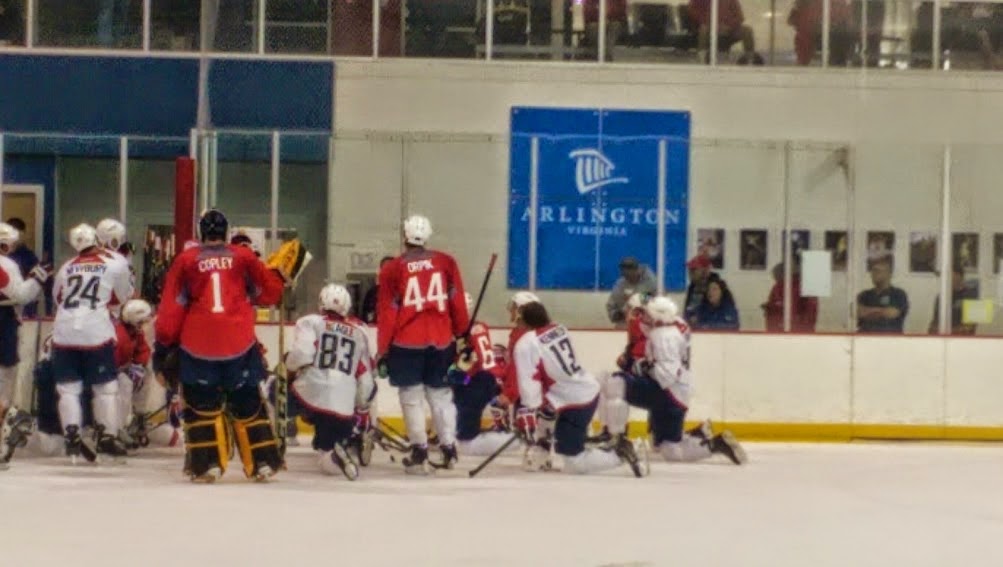 Johansson is down.  He looked to be in considerable distress once he got to the bench. 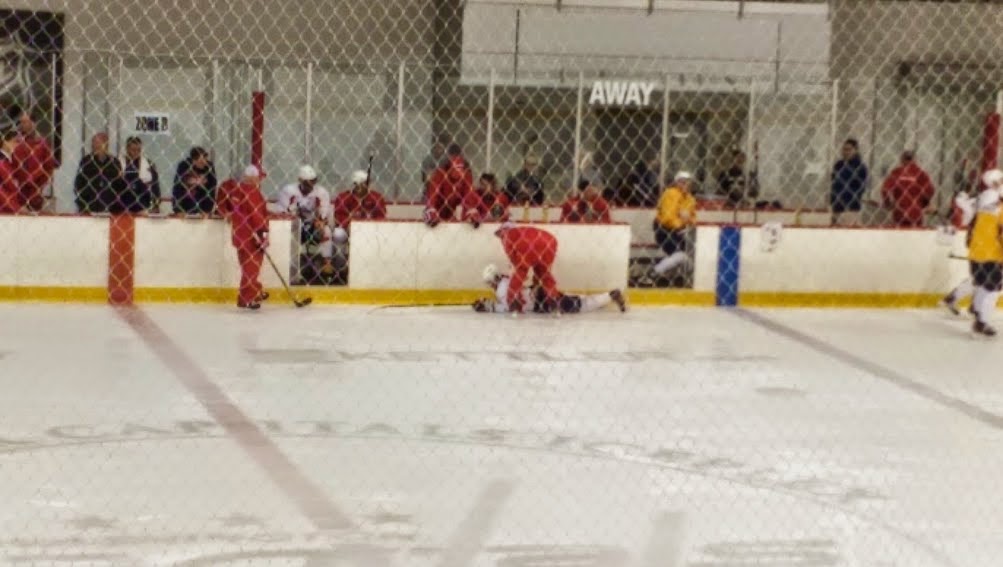 Justin Peters in a new setting. 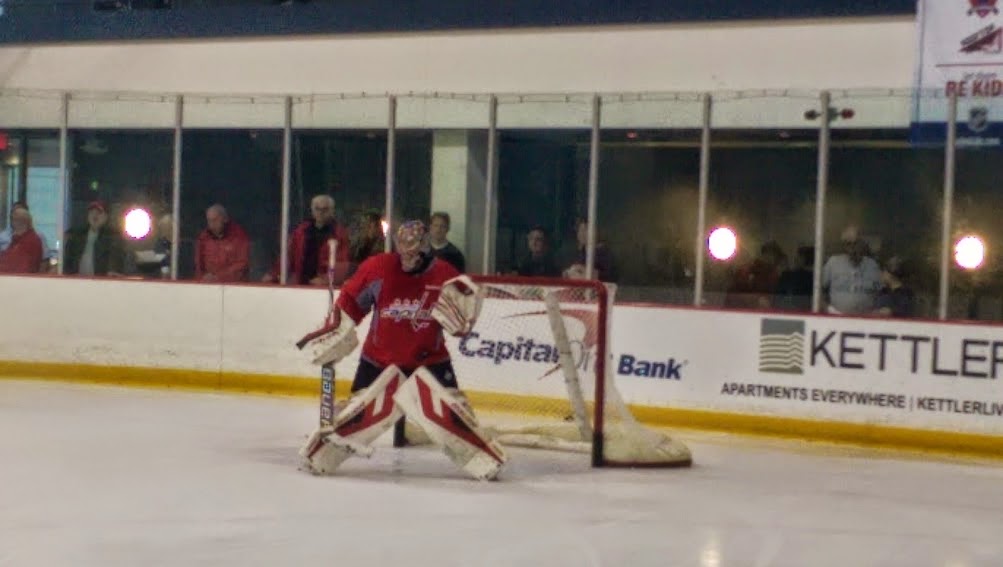 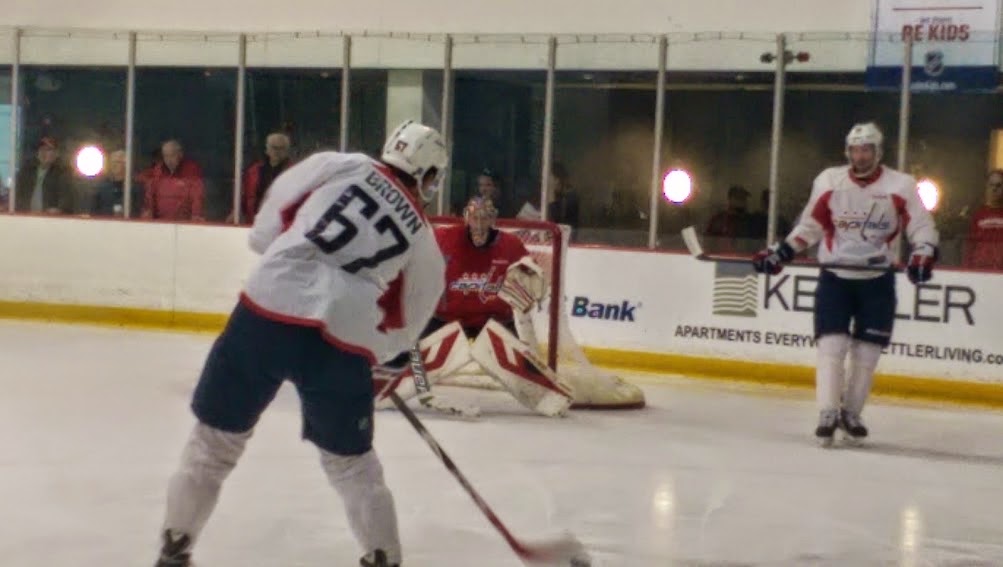 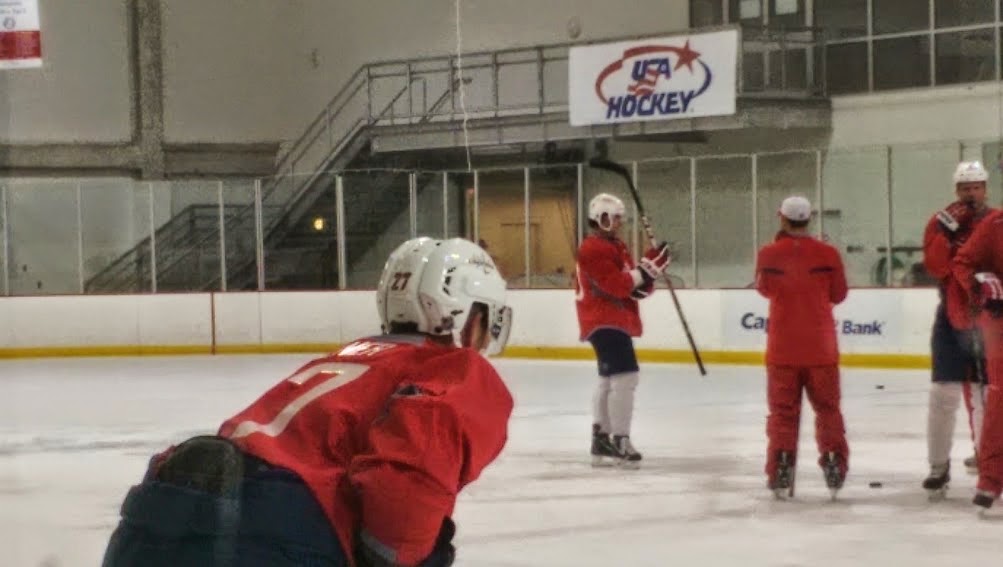 Get used to it, Caps fans.  That stick banging is going to be in your dreams for a while. 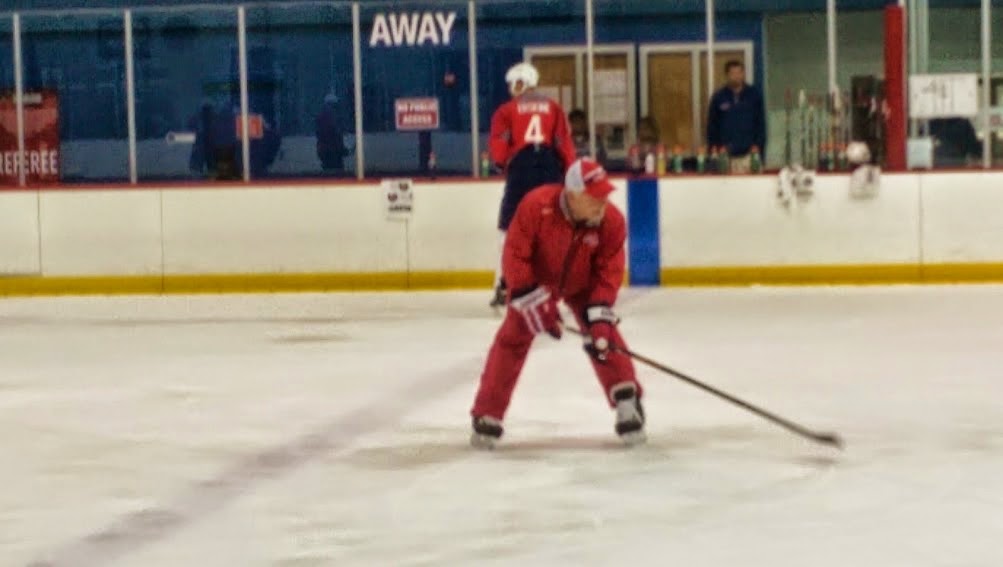 Posted by The Peerless at 6:19 AM No comments: