The Peerless Prognosticator is ON THE AIR!!! -- Game 70: Bruins at Capitals, March 15th

The Washington Capitals end their season-longest five-game home stand on Sunday when they host the Boston Bruins at Verizon Center.  It will be a clash of two teams that have passed one another on their respective journeys to the post season.  The Caps are 12-12-2 since January 14th when they were 24-11-8 and only three points out of the Eastern Conference lead.  They are now 36-23-10 and reside in eighth place in the East, holding the second wild card spot, seven points ahead of the ninth-place Ottawa Senators.

Meanwhile, the Bruins passed the Caps for the first wild card spot in the East with a 2-0 win over the Pittsburgh Penguins on Saturday afternoon.  It extended their consecutive games streak earning points to eight (7-0-1).   The Bruins have played well, but they have benefited from a bit of puck luck, too. Three of those seven wins in the eight-game streak came in extra time, and a fourth – Saturday’s win over Pittsburgh – was a one-goal game until Zdeno Chara scored into an empty net with 37.7 seconds left in regulation.  Boston outscored their opponents by a 25-14 margin over those eight games.  Their special teams performed adequately, the power play going 6-for-30 (20.0 percent) and the penalty kill going 20-for-25 (80.0 percent).

Boston has had enviable balance in their scoring over their 7-0-1 streak.  Brad Marchand leads the club with five goals in that span, and six other players have three apiece: Dan Paille, Loui Eriksson, Ryan Spooner, David Pastrnak, Milan Lucic, and Zdeno Chara.  Spooner and Pastrnak each have eight points to lead the Bruins in total scoring in this recent run.

Spooner started the season with the Bruins but was assigned to Providence in the AHL after appearing in five games without recording a point.  He was recalled in late February, and the second tour with the Bruins appears to have gone much better.  In ten games since his recall he has points in eight contests, going 3-6-9, plus-3.  Spooner has one career game against the Caps, going without a point in the Caps’ 4-0 win in Boston on October 11th.

Pastrnak, the 25th overall pick of the 2014 entry draft, has spent this season shuttling between the Providence Bruins in the AHL and the parent club.  His movements have taken place on almost a monthly basis – assigned to Providence in October, recalled in November; reassigned to Providence in December, recalled in January.  The recall in January might have been the charm.  In his second and third games following that recall he scored a pair of goals in each and recorded the game-winning goal in each..  More recently he has points in each of his last four games, seven of his last eight contests, and 12 of his last 16 outings, going 5-8-13 in that span.  He has not yet faced the Caps.

Rask’s shutout came in Saturday’s game against Pittsburgh, which means Niklas Svedberg might get the call in net for Boston.  His overall record is not extraordinary (7-5-2, 2.43, .918), but he does have three wins and a no-decision in his last four appearances.  He has never faced the Caps. 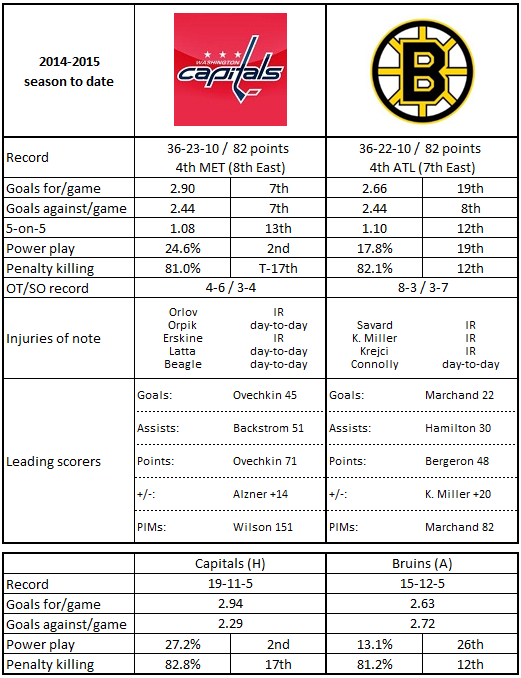 1.  Boston has an ability to jump on teams early.  They are tied for sixth in goals scored in the first periods of games (61) and have a plus-14 goal differential in the first period.  There is a bit of an odd quality to their first period scoring, however.  Only 27 times in 68 games have the Bruins taken a lead into the first intermission, and they rank 19th in winning percentage (.741/20-5-2).

4.  Three seems to be the magic number for the Bruins.  In games in which they score three or more goals (not including trick shots), they are 27-4-4.

1.  What happened to the home stand?  The Caps are 1-3-0, and while the goals, for and against, are even (10-10), six of those goals scored came against the hapless Buffalo Sabres.  Only one of the other four goals scored in the three losses was scored after the first period, and that was a window dressing goal scored with less than two minutes left in the Caps’ 4-2 loss to Dallas on Friday.

2.  It is nice that the new guy is contributing, but having Curtis Glencross leading the team in goals (3) and points (5) over a four-game stretch at home might not have been in the game plan.  He and Alex Ovechkin account for five of the Caps’ 10 goals on the home stand.  Five other players have one apiece: Brooks Laich, Joel Ward, Jay Beagle, Evgeny Kuznetsov, and Marcus Johansson.

3.  Washington has been killing too many penalties at home.  They rank in a tie for fourth in the league in most shorthanded situations on home ice (116).

4.  The Caps’ first period scoring is quite the opposite of that of the Bruins.  Washington is tied for the sixth-fewest number of first period goals this season (47).

5.  Only the New York Islanders in the Eastern Conference have generated more total shot attempts this season (4489) than the Caps (4038).  As good as that might sound, the Caps are ranked just eighth in the East in shot attempt differential (plus-143).  That is because the Caps have allowed the seventh-most number of shot attempts against (3895).

On Wednesday, Zdeno Chara will turn 38 years old.  Only seven of 291 defensemen having dressed this season are older.  While Chara is hardly doddering on the eve of his next birthday, there are signs that age is creeping into his game.  His 0.38 points per game this season is his lowest as a Bruin and his lowest since the 2001-2002 season in 75 games with the Ottawa Senators.  While plus-minus is not an especially persuasive indicator of performance, his plus-2 for the season would be his lowest for a season since 2006-2007.  Drilling down a bit, his Corsi-for (relative) at 5-on-5 ranks 30th in the league among defensemen (minimum: 500 minutes).  While that is an improvement on his 53rd-place ranking last season, it is a drop-off from his fourth-place ranking in the Bruins’ Stanley Cup season of 2010-2011.  He still leads the team’s defensemen in shorthanded ice time (3:17), and he is still logging significant minutes on the power play (2:06, third among Bruins defensemen).  Chara has three goals in his last seven games; in 58 career games against the Caps he is 7-19-26, plus-10.

With two assists against the Buffalo Sabres last Saturday, Nicklas Backstrom tied Michal Pivonka for the franchise record in assists (418).  In two games since, he has not added to that total, but that seems understandable since he was fighting the flu last week.  Of more concern might be that he has gone ten games without a goal and has only two in his last 18 games.  The Caps are 24-11-7 this season when Backstrom records a point, 9-1-4 when he scores a goal.  He is in sight of his second-highest season goal total (22 in 2008-2009), and he might have to challenge or surpass it if the Caps are to hold on to a wild-card spot to qualify for the post season.  In 23 career games against the Bruins, Backstrom is 4-19-23, plus-6.

On February 21st the Caps defeated the New York Islanders, 3-2, in a Gimmick.  The win left the Caps just five points out of the top spot in the Eastern Conference and 12 points ahead of the ninth-place Florida Panthers.  They will take the ice on Sunday 11 points out of the conference lead and just six points ahead of Florida for the last playoff spot, the Panthers holding a game in hand.  Ottawa is seven points back with the Senators holding two games in hand.  It is not time for fans to panic over the Caps chances to reach the playoffs, but that collar is getting a bit tight.

What makes things more serious for the Caps is that as they embark on their last 13 games they get the Bruins twice, the New York Rangers twice, Minnesota, Winnipeg, Nashville, Montreal, Detroit.  That is nine games against teams that would qualify for the playoffs today.  Add in a game against the Senators on April 4th, and the home stretch looks more like a mine field.  The Caps are going to get a dose of playoff hockey over these last four weeks, and it starts against the Bruins on Sunday.

Posted by The Peerless at 11:55 PM No comments: