We were perusing the puck headlines over at "Puck Daddy," and came across a link to a story about the 2010 Winter Classic and the "benchmark for Classic couture success." In the linked story from the Boston Globe, Bruins principal Charlie Jacobs is quoted as saying about that standard (the Pittsburgh blue uniforms borrowed from the 1968-1969 design),

“That worked, because they’re not necessarily their team colors. There’s no black or gold. It’s a powder blue jersey, and that made it unique. It’s certainly recognized in their market. It’s not like the Pirates, Steelers, or anything else. It’s unique.’’

"Unique." OK, that's one way to describe it. Here's another... they were the uniforms of a team that sucked. The Penguins did not incorporate black and gold into their jersey scheme until the 1979-1980 season. In the dozen seasons leading up to that change, the Penguins topped 30 wins in a season only five times and were a .500-plus team only four times. The reason they made the change? According to the Pens' web site...

"On Jan. 30, 1980, the Penguins wore black and gold for the first time. With the Steelers winning the Super Bowl and the Pirates capturing the World Series title in the same year, the struggling Penguins hoped to gain fan support by aligning their colors with the other teams in the 'City of Champions.'”

Now we know the real reason the Caps weren't invited to the Winter Classic. Someone would have had them go retro... 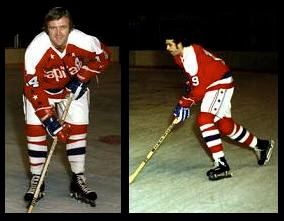 Posted by The Peerless at 1:56 PM No comments:

You were born in November of that year and grew up to be a gifted, if somewhat mercurial hockey player. You were drafted by something of a backwater club in the NHL and developed a reputation for moody, inconsistent play, despite your evident gifts.

But along comes the big city team, bright lights and bulging checkbook. They trade for you, thinking that they can unleash the offensive weapons you have at your disposal. You play in all 82 games, but finishing with 23 goals and 58 points is not quite what folks had in mind. It gets worse when you play in seven playoff games and don't register a single point in any of them.

The arbitrator gives you $3.9 million.

Are you a bargain? Or are the New York Rangers going to walk away from the arbitrator's decision, Nikolai Zherdev?

It does make one wonder, though, what another player born in 1984 -- one who has averaged 35 goals and 70 points per 82 games in his career -- might might see on an offer sheet next year when he, too, will be a restricted free agent...

Alexander Semin
Posted by The Peerless at 7:15 AM 2 comments:

It's An Ovie-ful Life: Part IV

As the curtain opens on Part IV, the Caps have once more finished last in the NHL in points, and the club has come to a crossroads. It’s May 2008, and the Caps are about to clean house in preparation for the summer’s activity. George McPhee – gone. Bruce Boudreau – gone. It seems that anyone not employed by the Caps in a skating capacity is being shown the door.

As the Caps are undertaking a front office remake, they are hit with a bombshell. Alexander Semin – arguably their most talented player – signs with the Kontinental Hockey League in Russia.

Rick Dudley is hired away from the Chicago Blackhawks, where he was assistant general manager, and assumes the role of general manager (his third tour of duty in the Southeast Division). He arrives too late to keep Semin from returning to Russia, and now he has to prepare for a draft that will be held in a matter of weeks. He has the benefit – and the pressure – of holding the first overall pick, as the Caps have won the lottery for the second time in three years. There is no mystery in this draft, though. Steven Stamkos is the odds-on choice as top prospect, and on draft day the Caps end whatever mystery there might be about whether they would trade the pick and announce Stamkos as the newest Capital.

There was still the matter of naming a head coach. Joel Quenneville, relieved of his duties by Colorado in May, is brought on board. That would not be the only move made by Washington. Gilbert Brule, the top Capitals pick of the 2005 draft, is sent to Edmonton for Robert Nilsson, an exchange of somewhat disappointing players. The Caps also swing a deal in free agency for former Ottawa forward Cory Stillman.

The 2008-2009 season opens in Atlanta, and the Thrashers should be a good barometer to gauge the state of the team entering the new season, for the Thrashers are coming off a disappointing season of their own (76 points, 13th in the East). The Thrashers pound the Caps in the opener, 7-4, but the Caps find their stride in October, finishing the month 5-3-1. It is their best October since the lockout.

What the Caps are finding is that they have an emerging defensive core. Cam Barker is a competent, if perhaps not an all-star defenseman. Mike Green is developing as an offensive defenseman. Erik Johnson (who did not stumble in a golf cart with St. Louis) is a number-one defenseman in the making. At forward, Stamkos – leaping straight to the NHL after being drafted in June – isn’t replacing Semin’s offense, but one can see why he was a number one overall pick. Turris, almost forgotten as the Caps’ top draft pick in 2007, takes his place with the big club. Stillman is a steadying veteran influence, if no longer a big offensive producer. They still have holes to fill, primarily among the forwards and at goaltender, but they make progress.

The Caps teeter along the fault line at .500 for most of the first half of the season, but an injury to Green and a flu bug going through the room take their toll. The Caps go 2-9-2 in January, and the team is left with only the faintest hope of making the playoffs. But they remain a difficult team to play against, a product of their improving defense, reminiscent of the kind of teams they iced in the 1980’s. They will finish the year 34-36-12 with 80 points, their best finish since the 2002-2003 season.

What they have not done, however, is significantly improve their popularity in Washington. They remain buried in the bottom third of attendance every year, with neither a consistent winning record nor a galvanizing personality bringing fans to the rink. What keeps them from being a perennial 30th ranked team in attendance is the fact that fans of other teams – either transplants living in Washington or fans that can make the trip – often turn Verizon Center into a “road game” for the Caps. The club cannot bid on high-end free agents, and even with a payroll closer to the floor than the ceiling each year the Caps can’t earn a profit. There are lingering questions hovering about this team as to whether it will remain the “Washington” Capitals. Although the club has made progress since the lockout, it has been measured in baby steps. In the summer of 2009 there is the broad realization that the Capitals are not yet a true playoff contender, and they are years – if ever – from being a Stanley Cup contender.

You, dear reader, may comb through this tale and find things you disagree with, or things that in your mind could not or would not have occurred. And neither are we making a case to turn Alex Ovechkin into a latter day George Bailey. There are a lot of ways to build a successful hockey team, and it often doesn’t require employing the best player in the league. Ovechkin is entering his fifth year, but has played for a team with only one playoff series win in that time. But that’s not the point. Ovechkin was drafted by the Caps in 2004, Crosby was drafted by Pittsburgh in that 2005 30-team lottery, and the Caps drafted Sasha Pokulok (the Rangers drafted Al Montoya in 2004… how’d that work out?).

Things are what they are, and all things considered, the Caps have done pretty well with the cards they were dealt in the draft the past half dozen years. Alex Ovechkin, Mike Green, Jeff Schultz, Nicklas Backstrom, Semyon Varlamov, Karl Alzner, John Carlson… even the most hardened Capitals fan would probably admit that this is a pretty good core of players. And that doesn’t include Alexander Semin, a 2002 draft pick. And there could be others on the way from those last half dozen drafts.

The Caps are not the favorite to win the Stanley Cup in 2009-2010; they might not even be “a” favorite. There are still holes on defense and uncertainty in goal that put them behind a Detroit or a Pittsburgh. But they do play an exciting brand of hockey, and they do sell out the house these days. It is unlikely any of this happens but for the bounce of a ping pong ball in 2004.
Posted by The Peerless at 6:04 AM 1 comment: