The Peerless Prognosticator is ON THE AIR!!! -- Game 53: Capitals at Sabres, January 28th

The Washington Capitals check off another city on their five-game road trip on Tuesday with a visit to Buffalo, NY, to face the Sabres. It will certainly be a… 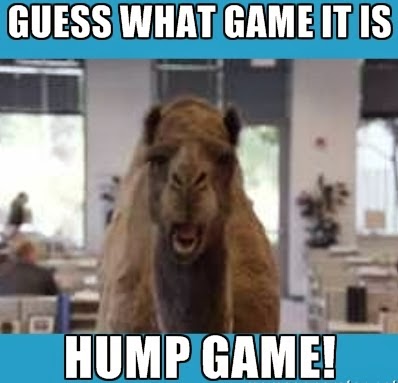 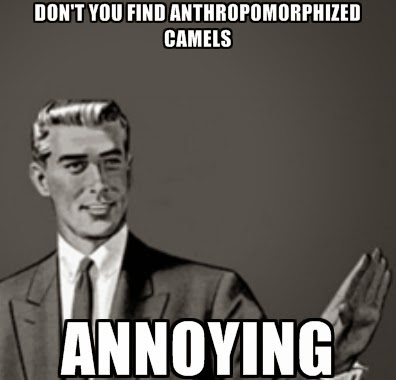 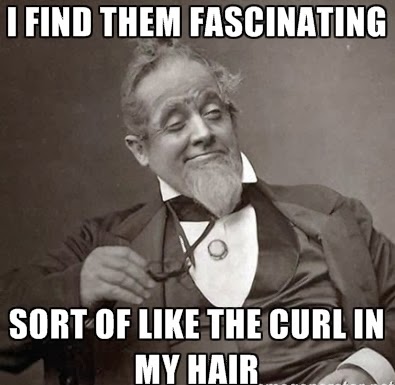 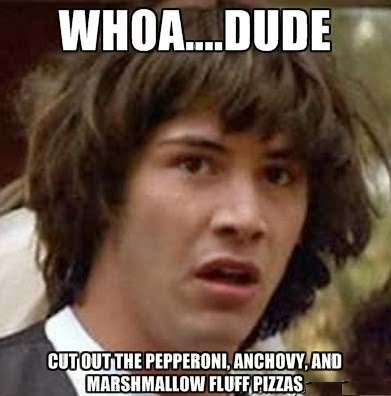 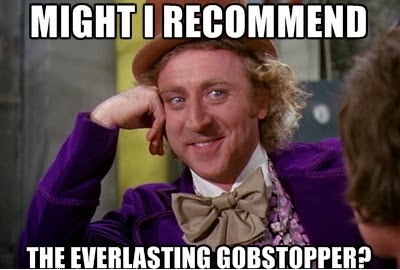 Actually, I think that is the nickname bestowed upon Sabres goalie Ryan Miller, but we’ll get to that. As for the club overall, the Buffalo Sabres snapped a five-game losing streak – that would be the five games played immediately after beating the Capitals on January 12th – with a 5-2 win over Columbus on Saturday.  They returned to their losing ways once more, though, dropping a 3-0 decision to the Pittsburgh Penguins last night.

It was the seventh time this season that the Sabres were shut out, tied with Nashville for the worst mark in the league.  Small wonder.  This is a team that boasts, if that can possibly be the right verb, two players in double digits in goals – Cody Hodgson and Tyler Ennis.  Hodgson at least gives the appearance of being hot.  He has four goals in his last seven games and  points in six of this last eight contests (4-4-8).  Ennis had been matching him scoring three goals over a six games span over which he also had points in each contest (3-4-7).  However, he has been kept off the score sheet in his last two games.

After that, things go south in a hurry.  Even Matt Moulson, a three-time 30-goal scorer with the New York Islanders, has just nine goals in 38 games with Buffalo.  Still, it is good for third on the club.

With a team having as much difficulty scoring as the Sabres, you might think they struggle in the old plus-minus statistics.  You have no idea.  Eight players are a minus-10 or worse, and no player having played more than 20 games is as much as “even” for the season.

Here are the overall numbers for both teams… 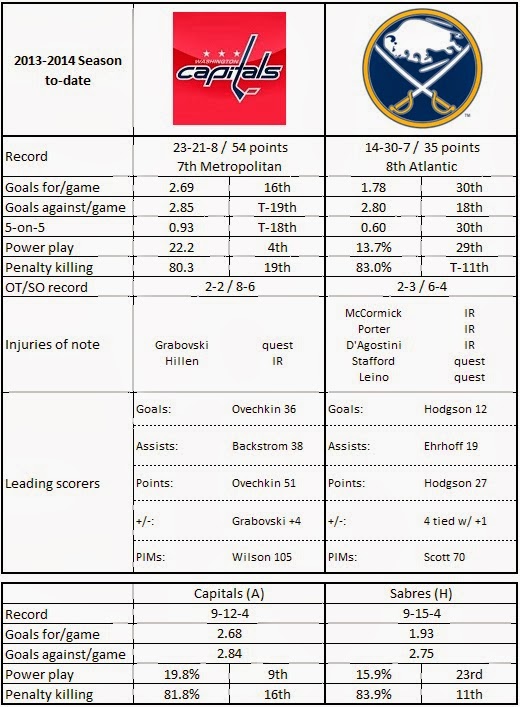 1. The Sabres really like that 2-1 score in deciding games. Going into Monday’s game against Pittsburgh that was the margin in 11 of the Sabres’ 50 decisions this season. Two of those 2-1 decisions came against Washington, both of them Sabre wins. Buffalo is 5-4-2 overall in 2-1 games, four of the wins coming in extra time, three of them in the Gimmick, two of those against the Caps.

2.  For those of you thinking Ryan Miller can’t keep up his spell over Caps shooters (he has stopped 77 of 79 shots against the Caps in two games this season), there is this.  At home, Miller is 8-5-0 against the Caps with a 1.99 GAA and .935 save percentage with two shutouts.  He has never allowed the Caps more than three goals at home.

3.  Going into their contest against Pittsburgh on Monday night the Sabres were 4-for-20 (20.0 percent) on the power play in six games since beating the Caps on January 12th.  Their penalty kill was 15-for18 (83.3 percent).  The odd thing about all of that is that in the five games in which they either scored a power play goal, allowed one, or both, they lost.   In the one game in which no special teams goals were scored, they won, 5-2 against Columbus to snap their five-game losing streak.

4.  As you might expect from the worst team in the league, standings-wise, the Sabres have the worst overall goal differential, 0.98 goals per game.  No team has scored fewer 5-on-5 goals (61, 13 fewer than Montreal).  By way of comparison, Chicago leads the league, scoring more than twice as many goals at 5-on-5 (133) than the Sabres.

5.  The Sabres treat the puck as if it was radioactive.  They are dead last in the league in both Corsi-for and Fenwick-for percentage in 5-on-5 close score situations (41.8/41.7).  They have been just as bad against the Caps (42.4/40.3 over the previous two meetings combined).

1.  The five goals the Caps scored against Montreal in their 5-0 win on Saturday was the most scored on the road since they beat Philadelphia, 7-0, on November 1st.

2.  Tom Wilson is tied for second in the league in fighting majors.  He has shown no particular preference in doing hockey’s hardest job, five at home, five on the road.  More encouraging, he comes into this game with points in consecutive games (0-2-2), the first time he has done that since recording a goal and two assists against the New York Islanders and the Minnesota Wild on November 5-7.

3.  With Mikhail Grabovski out for this game, Alex Ovechkin will go into the contest with more goals (36) than the next three Caps combined (Joel Ward, Nicklas Backstrom, and Jason Chimera combining for 34).

4.  It might not surprise anyone that the crafty Nicklas Backstrom leads the club in takeaways (36).  It might surprise some that Joel Ward is second (35).

When the Sabres start selling off players, and they will, Steve Ott is likely to grab attention as a player who can provide what the kids these days call “jam.”  He’s a pest, a nuisance, a turd in the punch bowl, a pain in the ass.  He also went into Monday night’s play 2-6-8 in his previous nine games.  Not Gretzky, but not bad for a player whose job description features getting under the skin of other players, not lighting the lamp.  He is 0-1-1 in nine career games against the Caps.

Troy Brouwer has gone 11 games without a goal, matching his longest streak of the season (November 10 – December 3).  For a player who has had the benefit of consistency and stability in being penciled in as the second line right wing almost all season, this is a disappointment.  It is made worse by the fact that he occupies a critical point as the “axle” on the 1-3-1 power play.  He does not have a power play goal since before Christmas, a power play goal that happened to be the game-winner in a 4-2 win over Carolina on December 20th.  The Caps have lacked offensive production this month, much of that attributable to Brouwer’s drought.  Things must change if the Caps are to sustain any level of success.

1.  Millerosity.  Know that online site that provides exercises in mental gymnastics to improve brain function?  The Caps might try some mental exercises to get Ryan Miller out of their heads (the best thing for that might be Buffalo giving him the night off after last night’s loss in Pittsburgh).

2.  Tend to business.  Buffalo is not going to dazzle anyone with skill.  They will grind and, if necessary, try to impose their physical will inside or outside the rules (they are tied for ninth in major penalties this season).  The Caps need to skate through the noise and finish what they start instead of being driven off plays.

3.  Little things.  Let’s face it.  This is not your 2010 Capitals.  They are not going to score goals in bunches, steamrolling opponents.  They need to do all the little things well – win faceoffs, avoid turnovers at the blue lines, be crisp on passes, don’t take silly penalties.