The Peerless Prognosticator is ON THE AIR!!! -- Round Robin Game 3: Capitals vs. Bruins 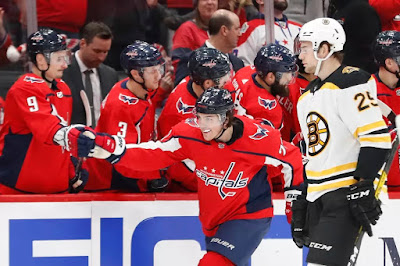 What goes ‘round, comes ‘round, that that goes for robins, too.  Not that the term “round robin” has anything to do with birds.  More like we English-speaking folks have trouble with French (the term is derived from the French “ruban rond,” or “round ribbon”).  Wherever the term comes from, the NHL version of the round robin comes to an end for the Washington Capitals on August 9th, when they face the Boston Bruins.  The Caps (0-1-1) and Bruins (0-2-0) will play in what amounts to the “losers’ bracket” of the four-team Eastern Conference pre-tournament tournament to determine who will get the three and four seeds in the Stanley Cup playoffs.  But before that tournament starts, let’s take a look at…

How we got here:

The Capitals chased this game a bit too much, allowing the Bruins the game’s first goal and then falling behind again before T.J. Oshie tied things up late in the third period.  With the Caps’ net empty, and the clock winding down under a minute remaining in regulation, Evgeny Kuznetsov settled a pass from Nicklas Backstrom at the goal line, stepped out to give himself a passing angle, and laid the puck out to Oshie between the hashmarks for a one-timer that beat goalie Jaroslav Halak with 58.6 seconds left to send the game to extra time.  After a scoreless overtime, Boston’s Charlie Coyle scored to open the freestyle competition, but Backstrom scored in the Caps’ last chance to tie it, and Jakub Vrana won it with a goal in the fifth round of the Gimmick.

The Caps yielded the first goal once more, this time off the stick of David Pastrnak mid-way through the first period.  The Caps took a second period lead on a pair of goals by Oshie 3:30 apart.  Boston tied things up on a sean Kuraly goal in the third minute of the third period, but John Carlson got the game winner less than two minutes later.  The game-winning play started with Nicklas Backstrom skating the puck down the left wing, around the corner, and behind the Bruin net.  Coming out the other side to the left of goalie Jaroslav Halak, he found Carlson stepping into the right wing circle for a pass that Carlson one-timed from the faceoff dot past Halak and a 3-2 win.

The last game before Christmas for the Caps was one big lump of coal.  Boston put the game away early with four first period goals, chasing Caps starting goaltender Braden Holtby.  Ilya Samsonov did not have to face many pucks, allowing one goal on four shots, but Boston scored two empty net goals around a Garnet Hathaway score for the Caps to wrap up the 7-3 Bruins win. 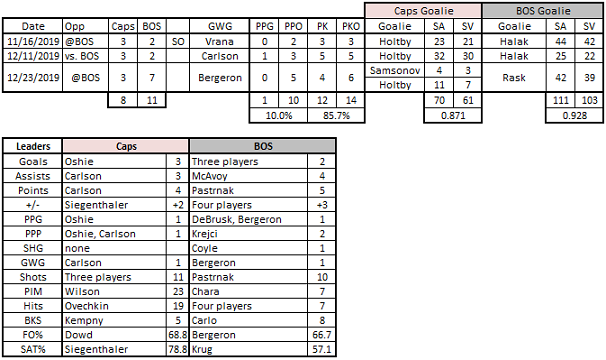 Who to watch for the Bruins…

Fun Facts in the Season Series…

If the Caps win, they get the New York Islanders to open the first round of the playoffs.  Lose, and they get the Carolina Hurricanes.  There are worse reasons to hope for a win, given the Caps’ frustrations with the Hurricanes, but what Caps fans might want to see here is just a simple, well-played, discipline, productive game at both ends of the ice, something they have not seen in either of the first two round robin games and the sort of game that was all too infrequent down the stretch of the regular season.  The Caps have a pair of 3-2 wins against Boston this season.  Why not a third?

Posted by The Peerless at 8:44 PM No comments: