The Peerless Prognosticator is ON THE AIR -- Game 70: Capitals at Islanders, March 13th 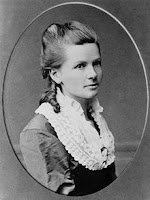 On the road again…just can’t wait to get on the road again. Well, given the Washington Capitals’ road record that might be a bit of a stretch, but the road is where the Caps find themselves. They start a five-game road trip with a journey to Long island to take on the New York Islanders. It brings to mind the first recorded road trip by automobile. Bertha Benz (wife of Karl Benz, developer of the first patented automobile) – we are not making this up, and we are assuming Wikipedia isn’t either, but hey, you never know – is credited with the first road trip by car. Mannheim to Pforzheim…66 miles in a car that did a maximum of 10 miles an hour. One can feel the wind blowing through one’s hair at the thought.

The Capitals will be hoping to keep up a more energetic pace against the Islanders than that of the car Ms. Benz took on here trailblazing trip, taking a three-game winning streak into their game against the Isles. The team the Caps will be facing was sitting at .500 (25-25-8) on February 18th and was six points out of a playoff spot. It was the last time the Islanders saw the .500 mark. Since then they are 3-6-2 in 11 games and have lost their last three (0-2-1).

Has it been a lack of offense? The Islanders have scored only 21 goals in those 11 games (1.91 per game). A lack of defense? New York has allowed 38 goals in the 11 games (3.45 per game). A power play with no power? They’ve had a 3-for-32 mark on the power play (9.4 percent). An ineffective penalty kill? An almost unbelievable 25-for-38 on the penalty kill (65.8 percent). It is almost amazing that the Islanders have won three games in those last 11 contests.

Perhaps no game, though, was as difficult a loss to take for the Islanders as the 3-2 overtime loss to the Caps on February 28th in Washington, when the Islanders took 2-0 lead into the last five minutes of regulation. But Troy Brouwer scored with 3:29 left in the contest, and Brouwer did it again with 26 seconds left to send the game to overtime. In the extra session Alex Ovechkin made the Caps’ comeback complete with a goal at 1:35 of overtime. It was a game that briefly pushed the Caps into eighth place in the Eastern Conference (they would drop back to ninth in the conference on March 1st).  Here is how the teams compare to one another: 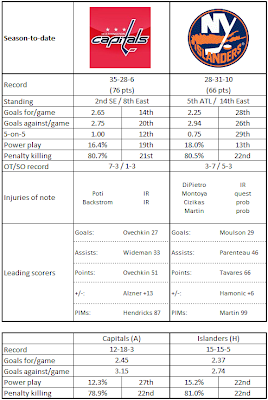 1. Twelve of the 21 goals scored by the Islanders over the last 11 games have been scored by three players – John Tavares, Matt Moulson, and Josh Bailey have four apiece. PA Parenteau (three) and Kyle Okposo (two), have another five between them. That leaves only four goals in 11 games over the rest of the Islander roster. The Islanders might be getting primary scoring, even a bit of secondary scoring, but tertiary? quaternary, quinary, senary, septenary, octonary? No…nary.

2. The Islanders are the sort of team that sticks around, but has trouble with that 60 minute thing. They are a minus-7 (goals for/goals against) in the first period, minus-12 in the second period, and minus-15 in the third.

1. Only two teams in the league have spent less time on the power play this season than the Capitals (4:58 per game). Small wonder…only five teams have had fewer power play opportunities than the Caps (3.1 per game).

4. Jeff Halpern is third in the league in faceoff winning percentage (58.3 percent). He is 82nd among 86 skaters eligible for league leadership in total draws taken.

5. Alex Ovechkin is sixth in the league in power play goals this season (11; no other Cap has more than five). The flip side of that is that Ovechkni ranks only in a tie for 43rd in even strength goals (16). In case you are wondering, he has not had a shorthanded goal since January 3, 2009, when he burned the Rangers’ Steve Valiquette for the game-winner in a 2-1 Caps win.

There are currently 13 30-goal scorers in the NHL. Steven Stamkos, Evgeni Malkin, Ilya Kovalchuk among them. Names any hockey fan would recognize. Matt Moulson, should he score one tonight, would join that group. He might be the most unknown of them. And it is not as if he hasn’t been in that group before. Moulson finished with 30 goals in his first full season in the NHL, in 2009-2010, then had 31 last season. He projects to a career-best 34 this season. He is a “slow and steady wins the race” sort of goal scorer, having only two multi-goal games this season (although one of them was a four-goal outburst against Dallas on December 3rd). Against the Caps he has only three goals in 11 career games, one of them coming in the teams’ last meeting on February 28th, a 3-2 Caps overtime win.

None in eight, one in 16, two in 28, three in 36. Since Jason Chimera had two goals in a 4-3 Gimmick loss to New Jersey on December 23rd, that is his goal-scoring track. On that pace he will score one more goal in the Caps’ last 13 games this season and finish with 17, higher than his 14.3 goals per 82 games to date in his career, but a far cry from the pace of 32 goals he was on after he potted that pair against the Devils in December. Getting the likes of Ovechkin going more frequently at even strength is on the Caps’ to-do list as they chase a playoff spot. But getting the occasional secondary goal from guys like Chimera (and Joel Ward, Matt Hendricks, etc.) will be an important ingredient, too.

1. Score first. The Caps do not have an especially good record when scoring first (23-6-4, good for 12th in winning percentage in the league), but there is a reason the Islanders are where they are in the standings. In a league where scoring first is essential for winning, the Isles are tied with Edmonton for 25th in wins when allowing the first goal and are 26th in winning percentage.

2. Line Matching? Try “Attitude Matching.” The Islanders have been no push over for the Caps. The Caps are 1-2-0 this season against the New Yorkers, their lone win coming in a rush at the end of regulation and an overtime goal the last time these teams met. The Islanders are a pesky sort of team, at least in how they have played the Caps. If the Caps don’t put on their man pants, they could end up being undressed by the Islanders, a team playing now only for pride and to be a spoiler for teams such as the Caps.

3. Hold on tight. The Caps have had a tendency to give up leads lately. They scored first on Carolina, held a two-goal lead at one point and lost in overtime. They scored first against Tampa Bay and lost the lead before scoring late in regulation and winning in overtime. They got out to a 2-0 lead against Boston and coughed it up before winning, 4-3. This is not a recipe for consistent success, despite the recent outcomes. Get a lead, and hold on tight…or at least tighter.

In the end, this is a dangerous game for the Caps. After this they go to Winnipeg, where the Jets don’t lose often and are still lurking, only four points behind the Caps. Then the Caps go to Chicago and Detroit in a back-to-back set of games. Ths game has “looking ahead” written all over it. We will see how well the Caps can do to make it a “one game at a time” game.

Capitals 3 – Islanders 2
Posted by The Peerless at 6:22 AM No comments: