In case you missed it...Brashear vs. Neil

East is East, and West is West, but Stupidity Lost its Compass

We can add the president of the Radek Bonk Fan Club, the Ottawa Sun's Bruce Garrioch to the mix of "Trouble In DC" commentators. In this morning's Sun, he opines on the matter of an "insulting" offer to Ovechkin by GM George McPhee, attributed to "sources." Given the tight-lipped behavior of the Caps front office on, well...everything, we're guessing the source was the parking attendant at Ballston Common.

Meanwhile, out west, the attention is on Calgary defenseman Dion Phaneuf, who Bellicose Bruce says Calgary is having trouble signing.

At least Blowhard Bruce didn't actually pen the word "trade" with respect to either player. But if you're looking to entertain yourself with some wild-eyed trade possibilities, head here, and type in "Alexander Ovechkin" to see some deals worthy of the goofy speculation oozing its way across the Internet.
Posted by The Peerless at 10:22 AM No comments:

Your Three Stars for December 29th 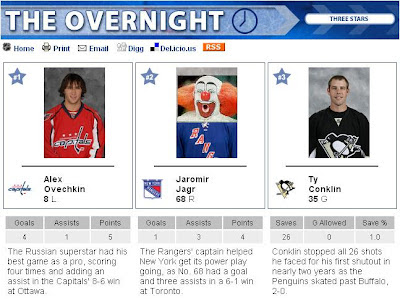 Even Jagr is impressed.
Posted by The Peerless at 8:56 AM 2 comments: 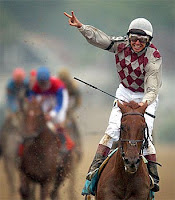 If the Caps should ever relocate to Canada, they might be a favorite to win a Stanley Cup. They’re 3-0-0 above the border so far this year, defeating Toronto and now Ottawa twice by a combined score of 19-9. Tonight’s 8-6 barn-burner of a win gave the Caps a 7-3-3 record for the month of December and allowed them to crawl out of the Eastern Conference basement as 2007 ends.

You’d have to go quite a way to find anything truly bad to say about the game for the Caps, even the goaltending (which we’ll get to in a moment). So...what happened?

And we expect a lot of Caps will be slicing their legs and getting stitches if it has the same effect – coincidental though it might have been – on Alex Ovechkin. He had four goals on five shots, plus an assist to record both his first four-goal game and five-point game. His hat trick was his third as a Cap, all on the road.

Nicklas Backstrom was 1-2-3 for his second straight multi-point game and fourth in his last eight.

Alexander Semin was 1-2-3 as well and now has four goals in his last six games.

Mike Green had a pair of assists and was denied a goal by goalie Martin Gerber in what perhaps was his only good save of the night.

Think the Senators didn’t miss Anton Volchenkov? They had only five blocked shots for the night. Volchenkov was averaging four a game.

Both teams had 49 attempted shots...Ottawa misfired on 27 of them (misses and blocks), the Caps only had 19 misfires.

The goalies’ combined save percentage – .745.

How many consecutive punches did Donald Brashear leave on Chris Neil’s melon...a dozen?

Viktor Kozlov is now 0-for-his-last-51 shots. That’d be like Derek Jeter going oh-for-June. We watch Kozlov these days and think upon a speech by Crash Davis in “Bull Durham”...

...Kozlov needs a gork in the worst way.

Each time the Senators crawled to within a goal in the third period (they did it three times), the Caps answered in short order. It took the Caps a combined 5:19 to respond to restore a two-goal cushion three times.

There is goaltending, and there is goal tending (as in standing around it, which is what the defense did for both teams much of the night). One could look at this game as a battle of goalies with their masks on backwards, but that isn’t entirely fair. Martin Gerber was more consistently bad in his effort than Olaf Kolzig was in his, although Kolzig might have had the most important gaffe of the night. Gerber played “Alphonse and Gaston” with Chris Phillips in the first minute to allow Alexander Semin an unimpeded path to the net for a wrap-around goal. He had decent looks at two of Ovechkin’s goals, and he flubbed covering the puck on the Backstrom goal. On the other hand, this would probably have been just another 5-2 game in the NHL season when Jason Spezza stole the puck four minutes into the third period, circled in the neutral zone, skated down the right side, and fired a puck long-side over Kolzig’s right pad to make it 5-3. The Caps just can’t give up a goal there with that much time on the clock. It opened the door back up for the Senators after the Caps had dominated for 40 minutes. Had the Caps lost this game, that goal would have been the key. But Kolzig was victimized by two deflections off the stick of Mike Fisher, gave up a shorthanded goal when Mike Green waved his stick at Fisher as if he was waving a white flag, and gave up another “shorthanded” goal on a penalty shot. He was as unlucky as he was bad.

"It was definitely a ratings booster for the TV stations and I'm sure the fans got their money's worth, but I'm too old for these kind of games. It's going to force me to retire sooner than I want."

We hope Olaf Kolzig was smiling when he said that after the game.

Returning to the baseball analogy, this was one of those games where every pitch gets tattooed, where every shot goes in, somehow...off a stick, through the legs, over a pad, whatever. Last to score wins, and the Caps scored last. A coach might not like this kind of game, but in the end it isn’t how, it’s how many. And eight is more than six.
Posted by The Peerless at 2:27 AM No comments: