“Never forget that what becomes timeless was once truly new.”
-- Nicolas Ghesquiere

The longer Alex Ovechkin plays for the Washington Capitals, the more one might be inclined to think back to the beginning.  That opening night against the Columbus Blue Jackets, coached by Gerard Gallant, who would be on the opposite bench almost 13 years later when the Ovechkin and the Capitals won their first Stanley Cup in Las Vegas.  That first shift, when 40 seconds in, he plastered defenseman Radoslav Suchý into the glass behind the Columbus net, popping out a stanchion holding the glass in place and delaying the game for several minutes while repairs were made.  That moment in the eighth minute of the second period when he took a pass from Dainius Zubrus between the tops of the circles and one-timed the puck past goalie Pascal Leclaire for his first NHL goal.

Odd Ovechkin Fact… If only his even-strength goals were counted, Alex Ovechkin would still rank second in the NHL (442 goals) in the NHL since he came into the league, and he would be only 20 behind Sidney Crosby.

Anyone who works with data knows there are an almost unlimited number of ways a large enough body of data can be sliced, diced, and massaged to make a point.  So let’s take a shot at this. It’s hard to compare eras in any sport, and hockey is no exception.  Players are bigger, faster, better conditioned, with the technology of equipment maximized to enhance performance.  Alex Ovechkin, 6’3”/235 pounds, using a state of the art stick, wearing lighter equipment than did Wayne Gretzky, 6’/185 pounds, using (for the most part) a wooden stick.  But players can be compared to their own cohorts to get a feeling for how they dominated their peers.

Looking at the first 15 years of Ovechkin’s and Gretzky’s careers, Gretzky had 803 goals in 1,125 games to 706 goals in 1,152 games for Ovechkin.  Score one for Gretzky on raw numbers.  And, Gretzky averaged 0.71 goals per game over his first 15 years to 0.61 for Ovechkin.  But here is the thing.  Ovechkin was a more dominating force among his cohort.  Over his first 15 seasons, his 706 goals were 244 more than the second-place player on the list over that span (Sidney Crosby: 462), 52.8 percent more than Crosby.  Over Gretzky’s first 15 years, he posted 186 more goals than the second-place player over that span (Mike Gartner: 617), 30.1 percent more.  And, looking at players who appeared in at least 500 games over Ovechkin’s and Gretzky’s respective 15-year spans, Ovechkin has a 0.61 to 0.53 edge in goals per game over the second-place player (Steven Stamkos), while Gretzky (0.71) is no better than fourth among his cohort (Mario Lemieux: 0.82; Brett Hull: 0.76; Mike Bossy: 0.75).  Gretzky, at the top of his game, might have been more dominant, but it would be hard to find a player in any era as dominant in goal scoring as Alex Ovechkin has been over 15 years.

Yeah, yeah, Ovechkin scores goals, water is wet.  But as time goes on, it is more and more becoming the only dimension to his game.  There are 24 instances in NHL history in which a player posted 45 or more goals and 30 or fewer assists.  Alex Ovechkin has four of them (no one else has more than two), and all four were recorded over the last seven seasons.  Last year, Ovechkin became the first player in NHL history to record at least 45 goals (48) and fewer than 20 assists (19).  Remember, this is a player who four times in his career recorded more than 50 assists (but none since 2010-2011).

The Big Question… Will Alex Ovechkin ever get old?

That question has more than one layer.  At the most superficial of them, watching him on a rush, or firing a one-timer, or punishing an opponent with a big hit never gets old.  But on another level, age seems to have had little effect on Ovechkin’s ability to score goals.  Since turning 30 years old, Ovechkin has 231 goals.  Only one player in NHL history has more goals in five seasons starting with his 30-year old season (Phil Esposito had 253 goals from 1972-1973 through 1976-1977).

But 35-years old might be a different matter.  Eighteen players have combined for 25 instances of scoring 35 or more goals starting with their 35-year old season.  Only five of those players (Teemu Selanne (twice), Brendan Shanahan, Bill Guerin, Joe Sakic, and Daniel Alfredsson) did it since the 2004-2005 lockout.

On the other hand, only once in the last eight full seasons has Ovechkin posted fewer than 35 goals, and in the abbreviated 2012-2013 season he still managed 32 goals (league leader) in 48 games.  Even with a 56-game schedule ahead this season, betting on Ovechkin failing to hit the 35-goal mark (a 51-goal pace over 82 games) might be a fool’s errand.

Fifteen years into the career of Alex Ovechkin, one must dig deep to find a superlative that has not been uttered about his performance on the ice.  He is one of the most skilled, most entertaining, most fun to watch players to have pulled on a sweater in the NHL.  Even at age 35, with his hair having turned mostly gray, and having settled down into a family life, he seems as energetic and as thrilled at his own and his teammates’ successes as he was back in the fall of 2005 when he first stepped on the ice for the Caps.  He is far closer to the end of his NHL career than he is to its beginning, but time has not diminished his prodigious goal scoring skill or dimmed his infectious personality.  In that respect, he is as “timeless” a player as exists in the NHL, and it is the good fortune of Capitals Nation to see him adding triumphs to his amazing career.

Posted by The Peerless at 8:30 PM No comments: 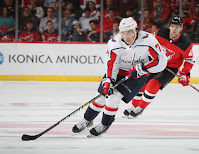 “There is no terror in the bang, only in the anticipation of it.”
-- Alfred Hitchcock

One cannot help but think we have been here before, at the dawn of a new season wondering if a player to whom fans have become attached will be watching him for his last turn around the league as a Washington Capital.  Last season, it was Braden Holtby that Caps fans wondered about, if he was playing his final season as a Capital with his contract about to expire and his likely price tag for renewal exceeding what the Caps were able (or perhaps willing) to pay.

This year, it is T.J. Oshie about whom Caps fans might wonder.  It might be for a different reason, and the attachments to Oshie might be a different sort than those fans had with Holtby, but here we are once more.  With Holtby, it was an expiring contract that fans anticipated would bring his tenure with the Caps to an end.  With Oshie, it is the new entry in the NHL, the Seattle Kraken, who are widely believed to have Oshie on their radar as a possible expansion draft selection, perhaps even the team's first captain.  Holtby was a home-grown product, drafted by the Caps, developed by the Caps, and who eventually became arguably the best goaltender in team history.  Oshie was drafted by a different franchise (St. Louis), grew up with a different fan base, built a solid resume in a different uniform before arriving in Washington.

But entering his sixth, and perhaps final season in Washington, Oshie is among the most beloved players of this, or any other era of Capitals hockey.  His hard-nosed style in which he always seems to be punching up in weight class, his skill, his fearless approach to the game, and his community service  combine to make him a favorite in Capitals Nation.

It did not hurt that he found a level in his game in Washington he did not have in St. Louis.  In seven seasons with the Blues, Oshie topped 20 goals only once (21 in 2013-2014).  In five seasons in Washington, he has failed to reach 20 goals only once with (18 in 2017-2018).  And he made up for that shortcoming that season by scoring a career-high eight postseason goals in 24 games as the Caps went on to win the Stanley Cup.

Oshie comes into the 2020-2021 season having posted his fourth 25-plus goal season (26) in five years with the Caps.  Those four 25-plus goal seasons already rank Oshie tied for eighth on the all-time list of Caps with 25-goal seasons (with Dennis Maruk).  It might be only an abbreviated schedule that will keep him from reaching the top five in club history in that category this season, tied with the likes of Alexander Semin, Bob Carpenter, and Dave Christian.  Oshie’s improved goal production has been a product of uncommon shooting efficiency.  In his five seasons with the Caps, Oshie has a 17.5 shooting percentage, tied for second (with Leon Draisaitl) among 293 skaters recording at least 500 shots on goal.  Only Mark Scheifele has been better (17.8 percent).

T.J. Oshie dressed for all 69 games for the Caps last season.  What is noteworthy about that is it is the first instance in Oshie’s 12-year NHL career in which he dressed for every one of his team’s games.  He missed 37 games over his first four seasons with Washington.  Oshie is as tough as they come, and his ability to produce those four 25-goal seasons with the Caps is more amazing in the context of the games missed and any lingering effects of injury.  But he also just turned 34 years of age, too.

The Big Question… Can T.J. Oshie maintain the pace?

T.J. Oshie found his goal scoring touch in Washington.  His 128 goals in five seasons in Washington are second only to Alex Ovechkin with the club over that span (231).  But the question is, having turned 34 years old, does Oshie still have that touch?  There are five active players in the NHL with at least one 25-goal season after turning 34 (Patrick Marleau (four), Zach Parise (two), Patrice Bergeron, Joe Pavelski, and Alex Ovechkin).  In an abbreviated season, getting to 25 would be a reach, but can Oshie score at that pace (17 goals in a 56-game season)?  Oshie has been a consistently efficient shooter with the Caps (17.5 shooting percentage over five seasons), and he has been consistent in producing shots (2.03 shots per game over five seasons).  Until he doesn’t do it (and age will take care of that, as it does for all players), the only thing that would seem to keep Oshie from maintaining his scoring pace is his ability to stay in the lineup.

T.J. Oshie is part of one of the stranger trades in Caps history.  He was obtained from the St. Louis Blues in July 2015 for winger Troy Brouwer, goalie Pheonix Copley, and a 2016 third-round draft pick.  Copley ended up coming back to the Caps (part of the Kevin Shattenkirk trade in February 2017), as did that third round pick in 2016 (with which the Caps took forward Garrett Pilon).  Of those mentioned, only Oshie remains in the NHL at the moment (Copley is in the minors, and Brouwer is an unsigned free agent).

But whether here or in St. Louis, Oshie proved himself to be a productive player on the ice and a fan favorite off it, at times inspiring rather intense feelings.  As this season unfolds, one cannot help but wonder if the reaction of a young fan in St. Louis upon his departure from the Blues might be a feeling shared by Caps fans after this season.  But in the meantime, Oshie has been, and continues to be a pleasure to watch.