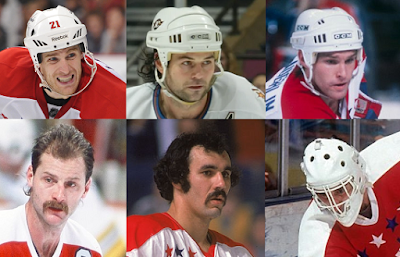 In our look back at the All-Alphabet Team for the Washington Capitals, we move on to “All-Team L.”  You might recall that the original team, published in the summer of 2014, was as follows:

You might think of this as the “All Legends Team” of a sort.  There are the first and second players in team history to have their sweater numbers retired (Yvon Labre and Rod Langway, respectively).  There is perhaps the most beloved color commentator on Capitals television broadcasts ever (Craig Laughlin), who happens to rank among the top-30 in franchise history in goals (110/28th), assists (173/28th), points (283/27th), power play goals (41/T-21st), game-winning goals (19/T-23rd), and shooting percentage (18.0/9th among players with at least 100 games with the club).  There is the player who was the first in league history to be traded while leading the league in scoring (Robert Lang, who was 29-45-74 in 63 games when the Caps traded him to the Detroit Red Wings in February 2004).  There is perhaps the best emergency road service provider in team history (Brooks Laich).   And, there is the first goaltender in Caps history to win a second round playoff series clinching game (Mike Liut, Game 5 against the New York Rangers in 1990).

The skaters are a group that has some considerable mileage in a Caps uniform, a total of 2,375 regular season and 176 playoff games played for the Capitals.  The flip side of that, oddly enough, is that none of the skaters are a home-grown product.  Laich was obtained in trade from the Ottawa Senators, Lang signed away from the Pittsburgh Penguins as a free agent, Craig Laughlin and Rod Langway obtained in the same trade from the Montreal Canadiens, and Yvon Labre claimed from the Penguins in the expansion draft when the Washington franchise was established.

In goal, Mike Liut does not have as much time with the club as the skaters (64 games over three seasons), but he completes the squad’s arrivals from other places, traded to the Caps from the Hartford Whalers.

As for possible replacements on the All-Team L, there are three possibilities among the skaters who have dressed for the Caps since the original team was published in 2014.  There are forwards Michael Latta and Brendan Leipsic, and defenseman Tyler Lewington.  As a group, they combined for 165 regular season games with the Caps, going 7-19-26.  Only Lewington among the three averaged more than ten minutes of playing time per game (11:04), but that was compiled over a total of only eight games with the club.  Latta is the only one of the three skaters to have dressed in the postseason for the Caps, playing in four playoff games without a point on his ledger.

In goal, Liut’s record is by no means especially impressive with the Caps, a .500 win-loss record (27-27-5), a goals against average north of 3.50 (3.51), and a save percentage south of .900 (.871).  However, there is the usual difficulty of there being no candidates since 2014 whose last name begins with the appropriate letter to consider as a replacement.

The original All-Team L, with some of the most recognizable names in team history, remains intact, a solid team that combines a hard-nosed approach to the game (Laich, Langway), reliable offense (Lang, Laughlin), and leadership with an edge (Labre) among the skaters.  In goal, Mike Liut had better numbers in his tenure with the Hartford Whalers, spending his time with the Caps as a .500 goalie in both the regular and postseasons.  That might be what holds back a team such as this from more success than it otherwise might enjoy.