The Peerless Prognosticator is ON THE AIR!!! -- Caps vs. Maple Leafs, March 24th

The penultimate road trip of the year comes to an end tonight in Toronto, where the Caps visit the Maple Leafs.

“You know, the name ‘Toronto’ comes from the Iroquois word tkaronto, meaning ‘place where trees stand in the water.’"

Fearless, where do you find this stuff?

“You think I spend my time reading your crap?”

“Don’t listen to him, cuz…’Toronto’ comes from the word for “Native American sidekick.”

“You sure about that?...hmm… maybe it comes from the word for ‘storm that eats mobile homes.’”

"I believe the word for “donut shaped” is, 'Koharski.'”

Well, while the cousins ponder “glazed” or “filled,” we’ll get on with the game. The Caps are visiting Toronto for the last time this year having won five of their last seven games. That’s not a misprint, although to hear some folks tell it, the Caps are challenging the Islanders for the rights to hog all the ping pong balls in the John Tavares Sweepstakes.

However, the Caps did lose to Toronto the last time these teams met, on March 5th – a 2-1 Leafs win. Since then, the Leafs have been utterly average… 4-4-0 in the eight games since. This should hardly be surprising, since the Leafs are 30-30-13 for the year. Their numbers are similarly middle-of-the-road… or worse: 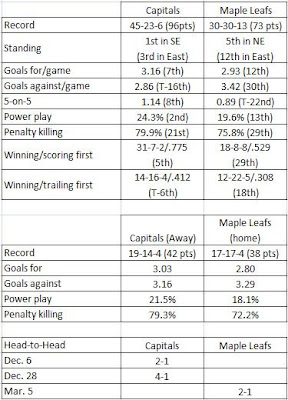 In the eight games since the Leafs and Caps met, Toronto has had difficulty scoring. While they have been outscored by only 26-23 over that span, eight of their 23 goals scored came in a single game, an 8-6 win over Calgary on March 14th. Other than that, 15 goals in seven games is rather anemic. On the other hand, taking away the six goals they surrendered in that Calgary game leaves them with having given up 20 in seven games – a considerable improvement over their last-in-the-league goals against average.

What Toronto has had trouble doing lately is winning at home. Since February 1st, the Leafs have won only four times in 11 tries at Air Canada Centre (4-3-4). And, 14 of the 31 goals they scored in those 11 games came in two games – the 8-6 win over Calgary and a 6-2 win over Pittsburgh in Michel Therrien’s last game behind the Penguin bench. In only two other games did the Leafs score as many as three goals in regulation, and they lost both of those games in extra time. You’d have to think that if the Leafs are going to win, they’re going to have to keep the score down.

And keeping the score down starts in goal. Martin Gerber was claimed off waivers from Ottawa at the trading deadline and made his debut with the Leafs in the 2-1 win over the Caps on March 5th. He is 4-3-0. 3.05, .905 since joining the Maple Leafs. He’s had his adventures against the Caps, though, compiling a career record of 6-3-1, 3.35, .879 in 11 appearances. Goal support appears key for Gerber, the 2-1 win in March notwithstanding. Yes, that would seem to contradict the notion of keeping the score down, meaning that Gerber probably can't coast on the heels of a goal scoring binge by his mates to win -- he needs to pull another rabbit out of his mask (you thought we were going to say something else?) to win this game.

Since the last time the Leafs and Caps got together, Toronto has seen a couple of guys hit it off together. Alexei Ponikaraovsky and Mikhail Grabovski are 4-9-13 and 5-4-9, respectively, in the eight games since the meeting at Verizon Center. What’s more, both of them have figured in the scoring in five of the Leafs’ last 13 goals, and at least one of them have been involved in eight of the last 13 goals scored by the Leafs, dating back to the 8-6 win over Calgary. Grabovski doesn’t have much of a history against the Caps, only three games worth (0-1-1, -1). Ponikarovsky has had 17 games worth of experience against the Caps, posting seven goals and two assists in the process. Each has an assist against the Caps in three games this year.

If there is one Toronto statistic against the Caps that might cause Maple Leaf fans to shudder – that is, when they’re not shuddering over another year without a Cup – it would be this number… -33.

March started slowly for Jason Blake – 0-1-1, -2, in his first four games of the month – but he’s come on since. In his last half dozen games, Blake is 3-3-6, +2. He has ten goals in 31 games against the Caps over his career, three of them game winners. He leads the Leafs in game-winners this year with five.

In the “if I didn’t have bad luck, I’d have no luck at all” category, there is Jamal Mayers. He hasn’t had a “plus” game in more than a month (13 games). But his only goal of March was a game winner (so there is some good luck in there, after all), scored in the 8-6 win over Calgary.

In the 8-6 win over Calgary on March 14th, Kulemin scored the Maple Leafs’ sixth goal of the contest, assisted by Alexei Ponikarovsky and Mikhail Grabovsky. Maybe that was the start of something. Last Saturday, Kulemin returned the favor, assisting on a pair of goals by Ponikarovsky, in addition to netting one himself with an assist from Ponikarovsky. Grabovski had a couple of assists in that mix, too. Kulemin is 2-2-4, +4 in his last three games.

On February 11th, Fleischmann scored a goal on his way to a two-point night in a 5-4 Gimmick loss to the Rangers. Since then, Fleischmann has one goal in almost 285 minutes of ice time. OK, so he can make up for that by being a playmaker. Well, he has three assists in that time, none since February 20th. A top-six forward whose claim to a jersey rests on his ability to create offense failing to create offense is, to be charitable, a problem. Compounding the problem is the possibility that Alexander Semin will miss the game due to the flu. Oddly enough, Fleischmann has been a more productive point producer on the road this year, going 12-9-21 in 35 games. The Caps could use some of his road show production now to take the heat off the usual suspects.

Here is your odd statistic for tonight as the Caps embark on the last “ten percent” stretch of eight games of the regular season. Over the last five seasons, the eventual Stanley Cup winner posted combined records of 22-8-10 in their last eight games of the year. All of them played better than .500 hockey in terms of standings points earned. You don’t have to be on a roll, necessarily (the Devils finished 3-1-4 in 2003 before winning the Cup), but it can’t hurt. The Caps are 5-2-1 in their last eight. If they finish that way, they will have 107 points, matching a franchise record. It’s certainly doable with the schedule remaining, and it would help if they got off to a good start on a good finish against the Leafs.