Are you a Wilson High Hockey supporter?...you ought to be 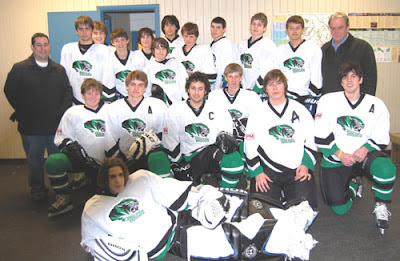 And here is your chance, as the crew of On Frozen Blog explains...

For the price of a movie ticket — $10 — we would ask each and every reader of these six blogs living in or near D.C. to make Friday night, February 29 one for hockey history in Washington. At 7:00 p.m. that evening at the Clyde’s of Gallery Place we’ll gather upstairs to watch the Caps take on the Devils in New Jersey, throw back a few puck sodas, and try and raise some urgently needed money for this desperate and inspiring hockey club.

Many of Wilson’s players never knew of hockey before being introduced to it by Paul McKenzie. We want to help keep these kids skating. Badly.

Hockey, rubbing elbows with team staff from Hershey and Washington, fans galore...like the OFB guys say, "It promises to be a memorable evening for an eminently worthy cause."
Posted by The Peerless at 10:29 AM No comments: 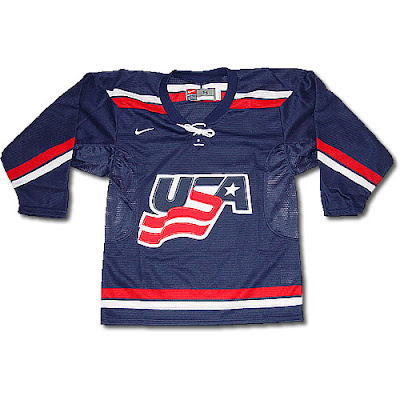 Today is "Hockey Jersey Day," the kickoff to Hockey Weekend Across America sponsored by USA Hockey.
So dust off that jersey and wear it proudly to school...maybe even if you're going to work, too.
Posted by The Peerless at 8:05 AM No comments:

The Peerless Prognosticator is ON THE AIR!!! -- Caps in Florida Edition

It’s a double dip in Florida, as the Caps take on the Tampida Bay Panthning tonight and tomorrow night in the Sunshine State.

It’s big…really big…Space Mountain big. It’s the last part of the road trip through most of the Southeast Division, and the Caps find themselves once more looking up at the Carolina Hurricanes, who beat Pittsburgh last night, 4-2. The win came at a heavy price though, as captain and Rock of Gibraltar for the club, Rod Brind’Amour, was lost for 4-6 months to a torn anterior cruciate ligament in his left knee.

But this is a weekend on the road for the Caps, and we thought we’d get the advice of the experts on what makes a good road trip. We have with us Max Rockatansky, who is something of a cult hero for road warriors. Max, welcome…

Max: [stares off into space]

Max, you’ve spent a lot of time on the road. What’s it like out there?

Max: ”It's that rat circus out there. I'm beginning to enjoy it. Look, any longer out on that road and I'm one of them, a terminal psychotic, except that I've got this bronze badge that says that I'm one of the good guys.”

So…what did you do before all this?

But how the world turns. One day, cock of the walk. Next, a feather duster…we also have with us those jokemeisters of the road, Bing Crosby and Bob Hope. Guys, you made a lot of “road” movies. What’s the secret to sticking together as a team out there?

Bob: “We never got along...we were always trying to see who could score with Dorothy Lamour.”

While those two figure out which end of the pig is up, we’ve got John Blutarsky and Eric Stratton, two guys who have spent a fair amount of time on “road trips.” Guys, the Caps lost the first game of this trip in a shootout. Is it, “game over?”

JB: “Over? Did you say "over"? Nothing is over until we decide it is! Was it over when Eye-rack bombed Pearl Harbor? Hell no!”

Is he for real?

JB: “What the #@$& happened to the guys I used to know? Where's the spirit? Where's the guts, huh? ‘Ooh, we're afraid to go with you Bluto, we might get in trouble.’ Well just kiss my ass from now on! Not me! I'm not gonna take this. Jokinen, he's a dead man! Lecavalier, dead! St. Lou-eeeeeeeeeeeeee...”

ES: “Dead! Bluto's right. Psychotic, but absolutely right. We gotta take these bastards. Now we could do it with conventional weapons that could take years and cost millions of lives. No, I think we have to go all out. I think that this situation absolutely requires a really futile and stupid gesture be done on somebody's part."

Well, let’s hope the Caps aren't in the futile and stupid business, because a back-to-back on the road in against divisional rivals with whom they are fighting for playoff spots is a stern test of skill and mettle.

Florida comes into tonight’s game with a decent record over their last seven games, but currently on something of a sour note:

Florida has spread their scoring around, with 18 skaters and goalie Tomas Vokoun registering at least a point. Three players tie for nine points in this stretch. Nathan Horton is 6-3-9, and Olli Jokinen is 6-3-9. However, the third player in this group witn nine points – Richard Zednik (6-3-9, including a hat trick against Toronto on February 5th) remains in a Buffalo hospital after the neck injury he sustained on Sunday night in Buffalo. The Panthers lost that game in Buffalo on Sunday, then lost in overtime to Montreal on Wednesday. If there has been some lack of focus in the aftermath of that gruesome injury to Zednik, it would be understandable. But with as much at stake as there is these days in a game such as that to be played tonight, one should not expect the Panthers to be anything else but ready. With a 3-2 record against the Caps this year, they should be confident, too.

Tampa Bay presents a different set of problems. Although they are 2-3-0 against the Caps this year (and losers of their last two), they are 5-1-1 in their last seven games. While the Lightning have their “big three-plus-one” to worry about (Vincent Lecavalier, Martin St. Louis, and Brad Richards...and Vaclav Prospal), the recent resurgence has come with the return of defenseman Dan Boyle to the lineup. After missing 36 games due to his own skate-related injury, Boyle scored two goals in his first game back, and in the last seven games for the Lightning is 1-4-5, +5, while lending a sense of stability to the blue line and the club in general. He’s had considerable success against the Caps in the past (7-22-29, +9, in 42 career games), and his return signals that the Lightning are once more a team to be reckoned with, which probably means a further tightening of the Southeast race.

Tampa wouldn’t be Tampa without their soap opera moments, though, and this week’s involves Prospal who, after a win against Montreal on Tuesday had some impolitic words thought to be directed at his coach, John Tortorella (himself not shy about tossing players under the bus in public). Whether this prompts a move of the forward (the big three now perhaps staying in the wake of the sale of the club) is something to watch in the days ahead. Another to watch will be Boyle, as he is an unrestricted free agent at the end of this year. With Tampa so top-heavy in salary, he could be moved as well, although the marriage of his return to the lineup and the recent success of the Lightning make that a difficult decision.

For Caps fans, scoreboard watching will become the order of the day (it’s been so long since one could indulge such luxuries), but for the club, it’s simple…win, and things take care of themselves, no matter what anyone else does. In the immortal words of John “Bluto” Blutarsky….”lets DO IT!”