The Peerless Prognosticator is ON THE AIR!!! -- Game 9: Capitals at Oilers, October 25th

The Washington Capitals try to make it two-for-two in their western Canada road swing when they visit Rogers Place in Edmonton (not to be confused with Rogers Arena in Vancouver, where the Canucks play, or Rogers Centre, where the Toronto Blue Jays baseball team plays, or Roy Rogers, which serves up a fine Double R Bar Burger) to face the Oilers.

Washington will be looking to channel their inner Lou Brown, legendary (if fictitious) manager of the Cleveland Indians, who once remarked to his club, “OK, we won a game yesterday. If we win today, it's called ‘two in a row.’ And if we win again tomorrow, it's called a ‘winning streak’... It has happened before!”  This contest against the Oilers would be the “two in a row” part of the scheme as the Caps work their way east on this trip.

For the Oilers, well, getting to competitive is a challenge.  So is consistency.  After dropping a pair of games on the road to start the season, the Oilers went on a three-game winning streak (see, it HAS happened before) before getting shut out by the Nashville Predators on home ice, 3-0, last Saturday and dropping a 6-5 overtime loss at Rogers Place on Tuesday against the Pittsburgh Penguins.

You would think that a team that had seven straight years of top-ten draft picks from 2010 through 2016, four of them first overall picks, would have more than a 24th-ranked scoring offense.  Well, you’d think that.  But in the “these guys could screw up a one car motorcade” file, let’s look at those seven top-ten picks: 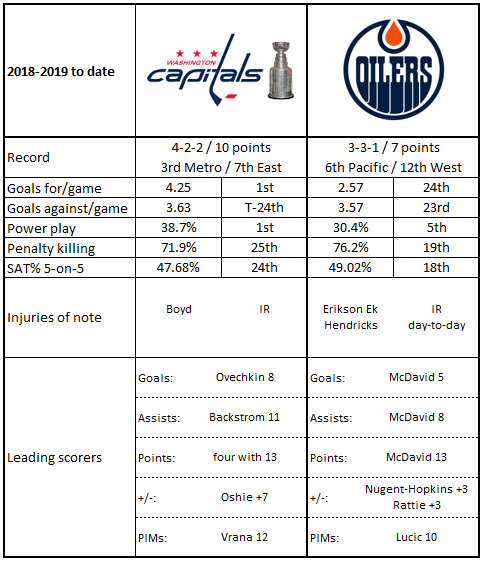 1.  Edmonton has 18 goals scored in seven games so far.  McDavid has a hand in 13 of them (five goals, eight assists).

2.  The Oilers have one goal from a defenseman this season so far (Nurse).  That is one goal on 72 shots from eight defensemen.  None of the eight are a “plus” player (Nurse and Evan Bouchard are “even”).

3.  If there is one thing the Oilers can do well, it is kill penalties on home ice.  They have skated off nine of ten shorthanded situations on home ice so far this season.

4.  The Oilers have not led a game at either intermission this season through seven games, the only club left in the league who could say that (if not very loudly).  They have scored the game’s first goal only once in seven tries…and lost.  They dropped a 4-1 decision in Boston to the Bruins on October 11th.

5.  One problem Edmonton has is that in some respect, they are “The Gang That Couldn’t Shoot Straight.”  Their 5.4 shooting percentage at 5-on-5 is fourth-worst in the league.

4.  John Carlson has more points (13) than the rest of the Capitals defensemen combined (10).

5.  The Caps continue to struggle with shot attempts, their shot attempts-for percentage at 5-on-5 (47.68) ranking 24th in the league (although they are going for “quality,” not “quantity”), but on the other hand, their offensive zone start percentage (54.87) ranks sixth highest in the league.

You would think that backstopping a team like the Oilers, with their bevy of offensively skilled (on paper) players, would have you cringing under a hail of rubber as teams take advantage of a certain defense-challenged attitude among those skilled players.  Well, not really, at least not in the case of Cam Talbot.  In 418 minutes of ice time this season, Talbot has faced 28.8 shots per 60 minutes of play.  Despite having the sixth highest total of minutes played, 12 goalies to have logged at least 350 minutes have faced more shots.  He has struggled in even strength situations, though, his .905 save percentage at evens ranking 44th among 62 goalies to dress so far this season (through Tuesday).  It is early, but it is quite a drop off considering that in his three-plus seasons in Edmonton, his even strength save percentage is .920.  In seven career games against the Caps, Talbot is 2-4-0, 2.51, .917.

Christian Djoos had a fine rookie season in 2018-2019.  The offensive numbers might strike some as modest (3-11-14), but he was tied in his rookie defenseman class in goals, was 12th in assists, and was tied for ninth in points.  His plus-13 rating was tied for fourth in that group.  Not bad for a seventh-round draft pick (195th overall in 2012).  It left the impression that he could be an offensive defenseman to complement the contributions of John Carlson or Dmitry Orlov.  That has not yet happened this season.  Djoos’ two points (both assists) are not a matter of significant concern yet, but he has only three shots on goal in 109 minutes of ice time.  This despite getting favorable zone starts (55.88 percent at 5-on-5; source: NHL.com).  His ice time has been whittled a bit, going from an average of just over 17 minutes in his first two games to an average of 12:35 in his last six games and only 12:04 in Monday’s win over Vancouver, the second lowest of the season so far.  Djoos is without a point in two career games against the Oilers.

Let’s be frank here.  The Caps should light this team up like Bourbon Street on Mardi Gras.  Washington can, and has, corralled McDavid to a point (one goal in five career games, but six points), and the Oilers have yet to show any significant level of secondary goal scoring, especially to the extent it doesn’t involve McDavid setting it up.  At the other end, the Caps can, and should, make the Oilers pay.  Their scoring offense (4.25 goals per game, first in the league) has the power to overwhelm a defense that ranks in the lower third (3.57 goals allowed per game/24th), and the power play (38.7 percent/1st) can make things difficult for the home team (good at home on the penalty kill, but 76.2 percent overall/19th).  The trick for the Caps will be not to let the Oilers get off early and get all frisky and confident.  Veteran teams know how to do that.  This decision rests on which Capitals team shows up.