Week 2 for the Washington Capitals featured a return match with their finalist foe from last spring, a matchup against a team they have dominated in recent years, and a chance to measure themselves against this year’s “it” team.  It was a muddled result, but a familiar one. 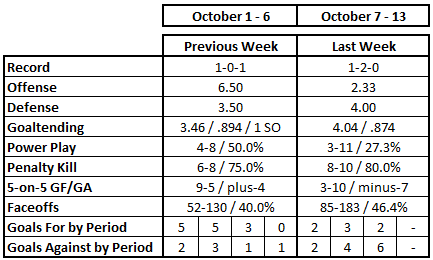 Last season, the Washington Capitals followed up a winning Week 1 with a below-.500 Week 2.  And so it was again to start the 2018-2019 season.  A 1-0-1 week was followed up with a week that started well, went south, and then went sideways.  Consider, though, that the Week 2 opponents finished fifth (Vegas), 15th (New Jersey), and seventh (Toronto) in the league standings last year.  Combine that with the Week 1 opponents, who finished fourth (Boston) and tenth (Pittsburgh), and it was a stout lineup of opponents to start the season.  When you then add that everyone is coming for the defending champs, a 2-2-1 record through five games is not the worst of all worlds.

The Caps started Week 2 where they left off in Week 1, threatening to burn out the goal lamp from overuse.  The five goals they scored against the Vegas Golden Knights in the first game of the week was the third straight game in which they scored five or more goals and the fourth straight regular season game doing so, dating back to Game 82 last season.  The Caps had not scored five or more goals in four consecutive regular season games since they did it in sweeping a four-game home stand in early February 2017, shutting out Los Angeles and Carolina by identical 5-0 scores, beating Detroit, 6-3, and wrapping up that home stand with a 6-4 win over the Anaheim Ducks.

On an individual level, Evgeny Kuznetsov continued his torrid start.  He followed up a 2-1-3, plus-1 effort in Week 1 by going 2-4-6, plus-1, in Week 2.  In his last 82 games he is 31-54-85.  Alex Ovechkin was the other Capitals with two goals in Week 2, bringing his total to four in five games.  It isn’t quite like last year’s nine goals in five games start, but it does resemble the five-game goal streak (one in each game) with which he started the 2015-2016 season, the last one in which he posted 50 goals.

John Carlson had a pair of assists and finished the week third among defensemen in scoring (2-4-6). Nicklas Backstrom went 1-2-3 for the week to join the other three among the top-30 point-getters in the league through Week 2.

Looking at the three opponents in Week 2, if the Caps were going to allow something north of 35 shots on goal and six goals to an opponent, one might have thought Toronto or Vegas were the likely culprits, not the New Jersey Devils.  But the Caps allowed 36 shots on goal in the 6-0 loss to the Devils in the middle game of the week.  The odd part of that result was that so few shot attempts were blocked by the Caps, just eight of 62 attempts, and only two of them by defensemen (one each by Brooks Orpik and John Carlson).  The Caps actually did a creditable job in holding down attempts by one of the most prolific offenses in the league, holding the Toronto Maple Leafs to only 57 shot attempts and only 28 of those on goal.

Overall, though, it was a difficult week for the Caps in holding back opponents’ possession numbers.  Washington had a shot attempts-for percentage at 5-on-5 of just 43.40, 24th in the league for the week.  They were simply awful in tied-game situations, ranking dead last at 36.07 percent.

Well, there have been better weeks.  Braden Holtby won his fifth consecutive game against the Vegas Golden Knights to start the week (that streak including the last four games of the Stanley Cup final last spring) and stopped 29 of 31 shots in the process.  That performance might be less impressive than it looks, given that the Knights scored only two goals in each of their first three games to start the season, and as of the end of Week 2 had yet to score more than that number in any of their six games.

Pheonix Copley got his first start with the Caps in the middle game of the week, breaking a streak of 274 straight games started by either Holtby or Philipp Grubauer in goal for the Caps, dating back to February 15, 2015, when Justin Peters stopped 30 of 33 shots in a 5-3 win over the Anaheim Ducks.  Copley’s debut was not as successful as hoped.  He did not get a lot of help, facing 13 shots in the first period against the Devils and allowing two goals by Kyle Palmieri.  He ended the night having faced 36 shots, six of which got through in the 6-0 loss.

Holtby was not bad in his start against Toronto to end the week, and his week might have looked a lot better but for a late sequence in which the Caps rained pucks on the Toronto net, but were unable to solve Frederik Andersen, and then the Maple Leafs put the game away on a pretty tic-tac-toe scoring play with less than two minutes left in a 4-2 win.  Holtby has not been an especially consistent starter in his career.  From 2012-2013 through last season, he had a record in the Caps’ first five games of the year of 11-8-2, 2.66, .908, with one shutout.  Through five games this season, he is 2-1-1, 3.26, .896.  Slump or slow start?  The next couple of weeks will do much to sort that out.

If your power play clicks at better than 25 percent for the week, and you go down for the season, it’s a good power play.  The week’s power play was the Oreo version, two sweet cookies (2-for-4 against Vegas to start the week, 1-for-3 against Toronto to end it), surrounding a nutritionally suspect filling (0-for-4 against New Jersey in the middle game).  That game against New Jersey was especially unsatisfying.  In 6:12 of power play ice time, the Caps managed only two shots on goal (Alex Ovechkin, Brett Connolly).  In the other two games the Caps had three goals on nine shots in 10:44, eight of those shots from Ovechkin (3), Kuznetsov (3), Carlson (1), and Nicklas Backstrom (1).  It was an encouraging result in a way, since all three opponents finished in the top ten in penalty killing last season.  As it was, the seven power play goals scored by the Caps in the season to date is topped only by the Toronto Maple Leafs, who have eight and have scored at least one in each of their games to date.

This was rough terrain for the Caps in Week 2.  As they did on the penalty kill, all three opponents for the week finished in the top ten power play efficiency last season.  The Caps were, for the most part, efficient in handling shorthanded situations.  The allowed only 11 shots on goal in 15:43 of shorthanded ice time, two of those shots getting through for goals.  It would be the penalty kill that did not kill that did in the Caps in the last game of the week.  Josh Leivo, an unlikely source of power play success for the Toronto Maple Leafs, potted a man advantage goal in the third period to break a 2-2 tie and propel the Leafs to the 4-2 win to put the Caps under .500 for the week.

The Caps finished the week under 50 percent in the circle, but it was not as bad as all that.  As a group they were at 50.0 percent in the offensive zone and one under 50.0 percent in the defensive zone.  It was in the neutral zone where they took it in the teeth, going only 40.7 percent.  On the other hand, only Toronto was been successful on draws last season, winning 51.8 percent of their faceoffs (sixth), compared to 48.9 percent for Vegas (22nd) and 47.0 percent for New Jersey (30th).

Individually, it was a case of Evgeny Kuznetsov dragging down the group.  Five Caps took at least ten draws for the week, and only Kuznetsov was under 50 percent.  By a lot.  He won only 15 of 48 draws (31.3 percent), although that number was dragged down by his performance in the neutral zone (3-for-17/17.6 percent).

At the other end, Nicklas Backstrom was over 50 percent in all three zones and 55.1 percent overall for the week.  Nic Dowd was tops overall at 55.2 percent on 29 faceoffs. 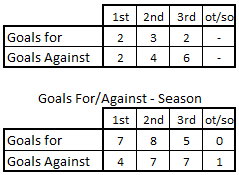 The Caps did not finish games well in Week 2, their goals allowed by period deteriorating from two in the first periods to four in the second periods to six in the third periods of games.  It did not help that despite being consistent on offense in spreading the goals out, it was a light-scoring week.  Allowing almost as many third period goals (six) as the offense tallied all week (seven) is not conducive to a successful week.

The Caps opened the season with five teams that qualified for the postseason last year, four of them having finished with more than 100 points, and one of them their opponent in the Stanley Cup final.  It was not an easy way to start the season.  That said, it was a disappointing week in one respect.  The New Jersey Devils are a team that the Caps have dominated in recent years (13-0-2 in 15 meetings preceding the loss this week), but could muster only a lackluster performance against them.  Against the Toronto Maple Leafs, the Caps’ offense was uninspired against Toronto, a team that allowed three of more goals in four straight games going into the game to end the week.  However, 2-2-1 through this five-game thicket is not the worst of starts, especially when missing their top line right winger (Tom Wilson, to suspension) and breaking in a new backup goalie.

Posted by The Peerless at 12:17 PM No comments: