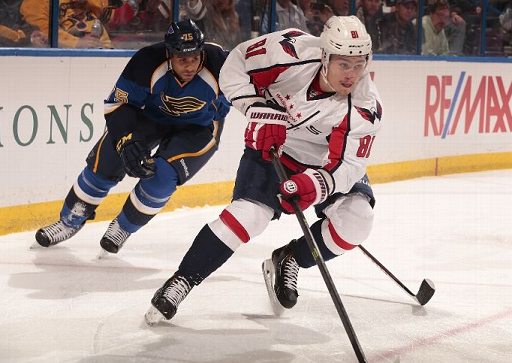 The last of the ten games that mattered to the Washington Capitals in the 2013-2014 was quite literally the last game that mattered.  A playoff spot was still possible, and there was still a player on the brink of a momentous achievement.

The Background:  With just four games left in the 2013-2014 season the Capitals’ post season hopes were hanging by a thread.   On the day the Caps would face the Blues, Washington was four points behind the Columbus Blue Jackets for the last playoff spot.  It was likely that the Caps would have to win out to have even the slightest chance at overtaking Columbus.  They were on shaky ground in terms of any likelihood of sweeping their last four games.  The Blues were waking up with the best record in the Western Conference, even after losing consecutive games to Colorado and Chicago.  The Caps came into this game on a win over the New York Islanders, but that went to the Gimmick and broke what had been a five-game losing streak for the Caps (0-3-2).

Why It Mattered:  Scottrade Center was not a good place for the Capitals to spend a hockey game.  In their previous ten trips to St. Louis, Washington had a 1-8-1 record.  On the other hand, the Blues had 28 wins at home going into this game, tied for second most home wins in the league.  The Caps played the Blues even for much of the first period, though.  Through the first 16 minutes the Blues held a 7-5 lead in shots, but the game was scoreless.  Then, with 3:37 left in the opening frame Derek Roy was sent to the penalty box for hooking Alex Ovechkin, unleashing the Caps’ lethal power play… you would think.

In the first 90 seconds of the Caps’ man advantage the Blues recorded the only two shots on goal, although one was officially recorded as being from 163 feet.  In the 91st second, things changed on an odd play that ended in familiar fashion.  It started when Jason Chimera left the puck for Evgeny Kuznetsov along the right wing wall  Kuznetsov, occupying the spot Nicklas Backstrom would usually man, scanned the ice and tried to hit Joel Ward in the middle of the Caps’ 1-3-1. The pass was slightly off the mark, and Ward had no play but to try to stop the puck with his skate.  What he ended up doing was kicking it back to John Carlson at the top of the offensive zone.  Carlson laid the puck out for Alex Ovechkin at the left wing faceoff circle, and Ovechkin one-timed the puck past goalie Ryan Miller, off the far post and in to give the Caps a 1-0 lead that they took to the first intermission.  It was Ovechkin’s 50th goal of the season.

The Blues tied it early in the second period when Maxim Lapierre put back a rebound of a Steve Ott shot past goalie Braden Holtby at the 2:39 mark after the Caps failed several times to clear the puck out of their own end.  That might have swung the momentum to the home team, but neither team could light the lamp over the next six minutes.  It would be the Caps breaking the tie in the ninth minute of the period.  With the teams playing 4-on-4 the play started with Mikhail Grabovski and Eric Fehr heading up ice on a 2-on-2 rush.  Grabovski curled in front of Fehr and wristed a shot at Miller, but he fanned on the attempt.  He recovered the puck in stride and turned around the left wing faceoff circle, then stepped up to the faceoff dot where he fired a slap shot at Miller.  The shot beat Miller cleanly past his blocker.

The Caps added to their lead late in the second period when Nicklas Backstrom made the pipe his friend as Ovechkin did in the first period.  Backstrom worked a give-and-go with Ovechkin, starting the sequence when he passed the puck to Ovechkin on the right wing at the red line.  Ovechkin skated the puck down the wall into the Blues’ zone and waited until the defense backed off.  Backstrom eased off the throttle a bit to give Ovechkin a passing lane, and Ovechkin found him, Backstrom one-timing a snap shot off the post past Miller and in, making it 3-1.

The Caps ended any thought of a Blues comeback in the first minute of the third period.  With Jaden Schwartz in the penalty box for the Blues, Backstrom converted on the power play when he took a cross-ice feed from Ovechkin, took a step inside to change his shooting angle, then wristed the puck past Miller for game’s last tally just 16 seconds into the period.  The Blues outshot the Caps, 9-1, over the rest of the period, but Holtby turned all of them aside, the Caps skating off with a 4-1 win.

The Takeaway:  The win kept the Caps in the playoff hunt, if only briefly.  The Blue Jackets won their game against the Phoenix Coyotes on the same night, then beat the Dallas Stars on the following night to clinch the last playoff spot and eliminate the Capitals.  It meant that the Caps would be shut out of the post-season for the first time since 2007.

There was the matter of Ovechkin’s 50th goal, though.  It was the fifth time in nine seasons he hit that mark.  Since he came into the league in 2005-2006 he had more 5-goal seasons any other player in the league, more than twice as many as Dany Heatley, Ilya Kovalchuk, or Steven Stamkos (two apiece).

For Holtby it was a fine performance in an unexpected start, given to him when his partner in the pipes, Jaroslav Halak might or might not have begged off facing his former team.

After this, the Caps had only to play out the string.  It was not a long string, just three games.  To their credit, the Caps went 2-0-1 in those games, the extra time loss coming in a double shutout in the season’ finale against Tampa Bay that the Caps lost, 1-0, in the Gimmick.  On this night, though, the Caps would show, if just for one more time, what was possible when the big guns – Ovechkin (1-2-3) and Backstrom (2-0-2) – were producing, and the team was getting solid goaltending (28 saves on 29 shots for Holtby).  In that sense the game mattered out of a sense of hope that the Caps could piece together more results like this in 2014-2015.

Posted by The Peerless at 6:18 AM No comments: