The Peerless Prognosticator is ON THE AIR!!! -- Game 29: Islanders at Capitals, March 16

Tuesday night, the Washington Capitals play a “big game.”  For the first time in a while, the Caps will be facing a team they are looking up at in the standings when they host the New York Islanders at Capital One Arena.  Going into Monday night’s games, the Caps trail the Isles by four points in the East Division standings and will be trying to end the Islanders’ nine-game winning streak and 12-game points streak (11-0-1).

Mathew Barzal is tied for the team lead in points over the Islanders’ 11-0-1 run (nine) and is tied for team best with a plus-11 rating.  Barzal is a supremely gifted offensive player, having posted 60 or more points in each of his three full seasons preceding this one, including an 85-point rookie season in 2017-2018, when he won the Calder Trophy as the league’s top rookie.  In spite of his still developing resume, Barzal is making his mark on the all-time Islander stat sheet.  Among 92 players to appear in at least 250 games for the Isles, Barzal ranks 12th in career points per game (0.88).  That might not sound especially impressive, but the list ahead of him includes some of the greatest players in league history such as Mike Bossy, Bryan Trottier, Pat Lafontaine, and John Tavares.  If there is an indicator of how the Islanders are doing, watch Barzal’s ice time.  In 11 games in which he skated more than 20 minutes so far this season, the Islanders are 3-5-3.  Less than 20 minutes, and the Isles are 16-1-1.  Barzal is 2-9-11, minus-7, in 15 career games against the Caps.

New York has three defensemen with more than ten points so far this season.  Ryan Pulock is the only one of the three to have done it without the benefit of scoring a goal (0-12-12, plus-11).  While he is not a high-end goal scorer, even by defenseman standards, it is a bit unusual for Pulock that he not have a goal this late into the season.  In two of the last three seasons he posted ten goals, and in the other he had nine.  This season has been something of a frustration, though.  Going into Monday’s games, only one player in the league had more shots on goal without having recorded a goal than Pulock (0-for-57).  Detroit’s Filip Hronek was 0-for-59.  Pulock is 1-5-6, minus-3, in 15 career games against Washington. 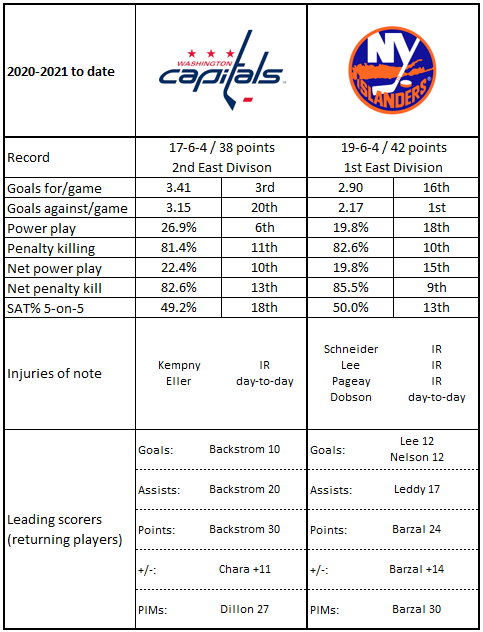 3.  Over that span of time, only Minnesota and Carolina have scored first in games more often (eight apiece) than the Islanders (seven).

4.  One reason for success of late for the Islanders is avoiding shorthanded situations.  Over their last dozen games they have been shorthanded an average of 2.25 times per game, third fewest in the league.

3.  Despite their offensive success in that span, the Caps averaged only 26.6 shots per game, third-fewest in the league.

4.  One area of success for the Caps in their 8-1-1 run, they allowed few first period goals, only six in the ten games.  Only five teams allowed fewer over that span.

5.  The Caps tied for the league lead in wins when leading after one period (five) over those ten games and was one of nine teams with a perfect record in those situations.

With Anders Lee out for an indeterminate length of time with an injury, Brock Nelson will take the ice as the Islanders’ leading goal scorer.  It is not an unfamiliar role for Nelson, who is among the most reliable goal scorers in the league.  While he cannot be considered “elite” in this regard, he has posted 20 or more goals in five of six seasons preceding this one and in his only sub-20 goal season, he netted 19.  With 12 goals in 29 games to date, he seems a good bet to make it six seasons in seven with 20 or more goals.  His consistency has allowed him to climb to 15th in the all-time list of Islander goal scorers (162).  He also has a shot at climbing into the top-20 in team history in other categories: points (needs 20 points to pass Ziggy Palffy (331) for 20th place) and power play goals (needs three to pass Kyle Okposo (35) for 20th place).  Nelson is ranked highly in games played (577/19th), career game-winning goals (23/16th), and overtime goals (six/tied for second).  In the Islanders’ 11-0-1 run, he is the leading goal scorer (seven) and is tied for the team lead in points (nine, with four other players).  Nelson is 8-8-16, minus-4, in 30 career games against Washington.

Conor Sheary started the season in good fashion with a January in which he was 2-1-3, minus-1, in seven games, posting those two goals on only five shots on goal (40.0 percent shoting).  He followed that up with a solid February for the Caps, going 3-1-4, plus-4, and shooting 20.0 percent in 11 games.  Productive lines for a forward whose primary role is in a bottom-six setting.  March has been less kind to Sheary’s numbers.  In six games this month, going into Monday night’s game against Buffalo, Sheary was 1-0-1, minus-4, and had only seven shots on goal in the six games.  He has not had more than two shots in a game in his last 14 games.

Perhaps with time, the fact that this is the Caps facing the coach that led them to their first and only Stanley Cup will fade, but for now it is an item of interest when these teams meet.  Since Barry Trotz left Washington for Long Island, the Caps are 6-6-0 against their old coach and just 2-4-0 on home ice.  Two of those losses at Capital One Arena were by shutout, and only once did they post more than three goals in a game.  The Islanders are, for the Caps, a very difficult team to play against.  It will not be any easier coming off a game on Monday night in Buffalo, but all streaks must end, and the Islanders are about to face that cold truth.

Posted by The Peerless at 6:55 PM No comments: