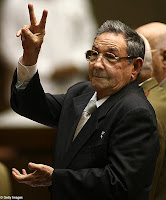 That’s five in a row for the good guys as the Caps defeated a gimpy but game New Jersey Devils team, 3-1 tonight at Verizon Center, or as it’s becoming known, “Bruce’s House of Horrors.” The win gave the Caps a 7-0-1 record at home (13-0-1 dating back to last season) and put them four points ahead of Carolina with a game in hand for the Southeast Division lead.

It was bobblehead night – the featured Cap being Coach Bruce Boudreau – although most of the bobbling of head was done by Devils goalie Scott Clemmensen, who saw chance after chance coming his way and skittering just past a post or just off the end of a stick in close. Clemmensen stopped 24 of 26 shots, but was more lucky than good on this night as the Caps seemed to get far more chances than usual against this team.

Brooks Laich, Tomas Fleischmann, and Alex Ovechkin did the honors – Laich redirecting a drive by Ovechkin in an example of the goal from “Dirty Jobs” area, Fleischmann making us look good by snapping a one-timer off a feed from Viktor Kozlov (his 500th career NHL point), and Ovechkin sticking the dagger in the Devils with an empty netter.

At the other end, Jose Theodore was staking a claim to regain his number one status with a 32-save effort, the only goal he allowed coming as the result of a ghastly line change that left Patrik Elias alone without a Cap within 20 feet of him as he converted a breakaway on Theodore.

If not a dominating effort, the Caps were clearly the better team and gritted one out against the plucky, throw-sand-in-your-skates Devils. What we saw…

-- Dainius Zubrus…two shots, two faceoff wins (in 12 draws). No hits, no blocked shots, no takeaways, no shots that were missed or blocked. Mighty skimpy score sheet. Want him back, Caps fans?

-- Give Paul Martin credit. He was out there toughing it out for the Devils (his playing was reported to be a game-time decision as he had an injury) with two hits, two takaways, and a blocked shot in more than 22 minutes.

-- Tom Poti had a pretty quiet score sheet, himself, but he had a fine game in his own end, cleaning up a lot of loose pucks and getting the biscuit out of the zone on the penalty kill. We don’t remember him being this responsible in a lot of his other stops along the way in the NHL.

-- And it seems a contract has done John Erskine a world of good. He has ramped up his game quite a bit since inking the new deal. Tonight, he kept things simple and just kept the puck moving. And five blocked shots? He must be channeling Quintin Laing.

-- Brooks Laich had another one of those games we might call “score sheet buffet.” A goal, an assist, two hits, a takeaway, four blocked shots, and he won six of 11 draws. Fine game.

-- Alexander Semin did not appear in the third period. He is said to have a…no, not even an injury by hemisphere (lower body?...upper body?)…he’s just called “day-to-day.” Let's hope it's just "day"...as in "available tomorrow night."

-- Tomas Fleischmann is what one might refer to as a “sneaky SOB.” He had several occasions of all-but-undressing a defender with his puck-handling, leaving him with excellent chances (“that he really needs to finish” is the clause to end that thought, but tonight, saying it would be picky).

-- In the Battle of the Defensive Centers, it was John Madden with four shots, one takeaway, one blocked shot, and eight of 12 draws won; versus David Steckel with one shot, one hit, one takeaway, four blocked shots, and nine of 13 draws won. Call that one a draw (although Madden had the tougher assignment).

-- And here is the stat that really caught our eye…21:34. That was the ice time for Tyler Sloan, who continues to impress by doing things simply. Only Green had more ice time among the defensemen. If I was Milan Jurcina, I'd be concerned.

Good thing the Caps took the four games at home these past eight days, for now they go on the road against New Jersey to complete the home-and-home, then on to Anaheim, Los Angeles, San Jose, and Minnesota.

Finally, we give up. This Pittsburgh-Washington thing has finally jumped the shark. Even on a night honoring Bruce Boudreau with his own bobblehead, you can’t escape it (if you read the fine print on the bottom of the box)... 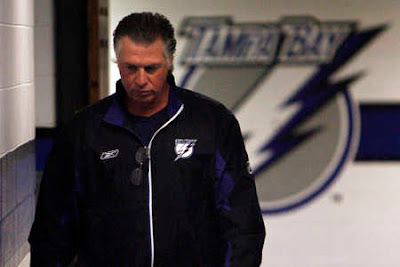 Barry Melrose was relieved of his duties as head coach of the Tampa Bay Lightning today. As is the custom with such things, the Lightning released a statement about the firing and the selection of a replacement, former associate coach Rick Tocchet. Consider this translation of the highlights a public service...
“This was a tough decision to make. Barry is a good man and we have a great deal of respect for him. We wish him nothing but success."
Translation: "We'd have done this a month ago, but it would have really made Oren, Len, and me look like a bunch of boobs."
"However, the results were unacceptable and the players have to understand that we need to be better. Hopefully this change helps push them."
Translation: "Hey, we can't fire the players. We're in hock up to our eyeballs to pay these losers. We'll just cross our fingers they can win a few games by accident."
“As for Rick Tocchet, we think this is a great opportunity for him and we believe he’s the type of coach who can take the team to the next level. Our players have a great deal of respect for him.”
Translation: "Scotty Bowman wasn't available." 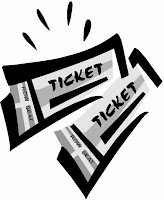 "The Official Resale Ticket Provider of the NHL" is how it is billed.
"Ticket holders seeking to sell tickets through NHL.com can do so in the dependable and convenient domain of the official ticket exchange. The ticket resale service provides fans the opportunity to find and buy tickets in a fan-friendly and secure environment. It also enables ticket buyers to electronically validate the resold tickets at the time of purchase."
"Fan-friendly"..."secure"...can I have cookies with that warm milk, too?
Posted by The Peerless at 12:27 PM 3 comments:

What's wrong with this picture? 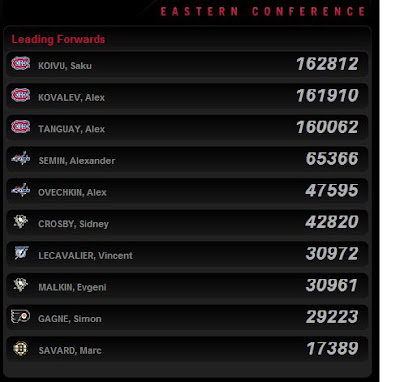 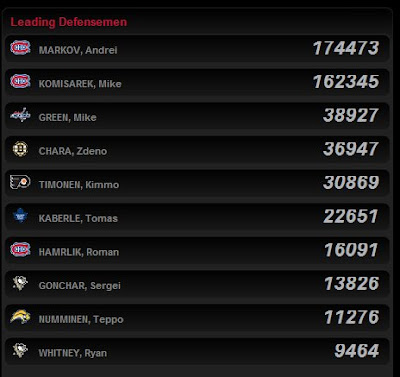 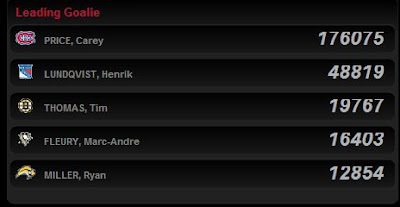 Is it going to be the "Montreal Canadiens vs. the Western Conference All Stars?"

Dan Steinberg, in DC Sports Bog, notes that Tom Poti has one of those injuries that doesn't hide itself well, as do sprains, strains, and the like.

Having the memory of suffering this malady from time to time ourselves, we thought we'd do a little research on the matter and see just what one does to treat the affliction. Poti noted that ""You've just kind of got to let it run its course. Usually it starts black, and then turns blue, and then yellowish greenish, and then it goes away." But what do the experts say?

According to the Mayo Clinic, one should take care of the injury by "using gentle pressure, apply a cold pack or a cloth filled with ice to the area around the eye. Take care not to press on the eye itself. Apply cold as soon as possible after the injury to reduce swelling, and continue using ice or cold packs for 24 to 48 hours. Be sure there's no blood within the white and colored parts of the eye."

The online site, WebMD suggests that for self-care at home...

- Ice helps to decrease swelling by constricting blood vessels, by decreasing fluid accumulation, and by cooling and numbing the area.

- Apply ice for 20 minutes an hour every hour while awake, for the first 24 hours. Ice should not be applied directly to the injury.

- To avoid potential cold injury to the site, wrap the ice in a cloth or use a commercial ice pack. A bag of frozen vegetables wrapped in a cloth makes a good ice pack.

- Protect the area from further injury. Stay away from athletic or other possibly injurious activities until after the eye has healed.

- Forget the old adage about putting a steak or a piece of raw meat on a black eye. No scientific evidence supports this claim. In addition, there is a danger in putting potentially bacteria-laden meat on a mucous membrane or an open skin injury.

Interesting...vegetables, but no meat. Wonder if brussels sprouts work better than peas and carrots.

We also came across remedies that included some truly strange applicatons...

- Using the back of a spoon to dissipate the blood (didn't say if it was a teaspoon or a tablespoon...guess that depends on the size of the bruise)

- Eating pineapple or papaya (something about an enzyme, but we're thinking this is a ruse by the tropical fruit lobby)

- A mixture of 1 part cayenne pepper and 5 parts melted Vaseline, to be mixed and cooled, then applied once a day.

- A tea made with confrey root or buchu, in which a rag is then soaked and applied to the bruised area

Of course, if you can't get to the grocery store for frozen peas or to your neighborhood health foods store for confrey root, there's always the old school remedy...