Week 19 was one of sun and fun for the Washington Capitals, who took advantage of their league-sanctioned bye week to bask in the glow of their top spot in the league standings.  And when it was over, the Caps did play a game.  It made for a non-winning week, but a non-losing one as well, taken from a certain point of view. 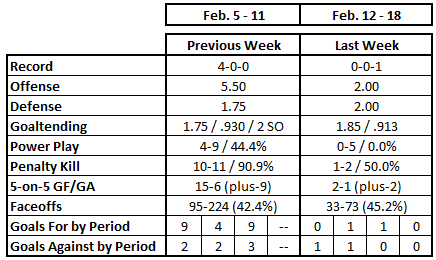 When last we saw the Caps, they were 39-11-6, nine points clear of their closest pursuer in the Metropolitan Division, the Columbus Blue Jackets, who ended Week 18 with a 35-14-5 record.  The Caps were also six points ahead of the Minnesota Wild for the top spot in the league rankings, the Wild with a 36-12-6 record.

When Week 19 ended, the Caps suffered a 3-2 trick shot loss to the Detroit Red Wings, bringing their streak of winning weeks to an end at six, over which time they went 18-2-1.  The rest of the league had yet to catch up with the Caps, though.  Pittsburgh leap-frogged the Blue Jackets into second place in the Metro, but their 80 points on a 36-13-8 record was still five points behind the Caps.  The Wild went 3-1-0 for the week, but they were still a point behind the Caps in the league standings with 84 points, the Caps holding a game in hand. 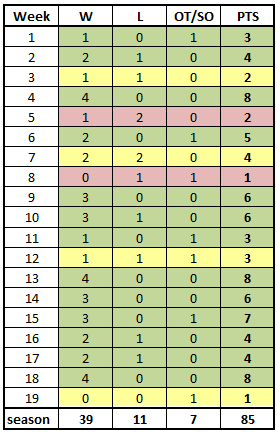 The Caps ended the week where they started it, behind only the Penguins in scoring offense.  The two goals they scored against the Detroit Red Wings was just the 20th time this season that the Caps were held to two or fewer goals.  They have a record of 4-10-6 in those games, five of the extra-time losses coming in the freestyle competition.  The two goals also broke a streak of four straight games in which the Caps scored five or more goals. It was an odd occurrence for a club that has scored more goals in the 2017 portion of the season than any other team, their 4.41 goals per game almost a full goal per game more than the Minnesota Wild (3.64).

Braden Holtby had a solid effort in the 3-2 loss to the Red Wings, but the loss did end his personal streak of 14 winning decisions.  Nevertheless, Holtby did finish the week fourth in the league in wins (29) despite ranking only 12th in minutes played (2,593).  The Caps remain the only team in the league with a tandem of goaltenders each with at least 750 minutes of ice time and a save percentage of .925 or better.

The Caps failed to take advantage of that rare occurrence when they get five or more power play opportunities.  The five they enjoyed against the Red Wings was just the eighth time in 57 games this season that the Caps had that many man advantages.  It was the fourth time they failed to convert any of their opportunities.  The oh-fer also broke a streak of three games with power play goals, over which they went 4-for-7.  The Caps are still 18-for-60 (30.0 percent) on the power play since January 1st. 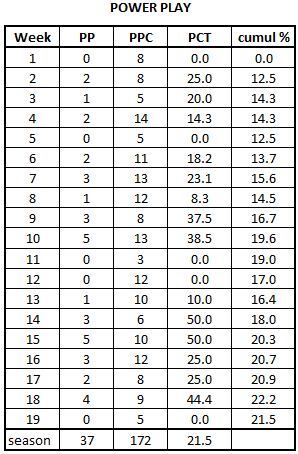 The Caps are holding their opponents to fewer chances – the two power play the Red Wings had making it three straight games allowing an opponent just two power plays – but it was the second time in three games the Caps allowed a power play goal.  Still, they are 14-for-16 killing penalties over their last six games, the 87.5 percent penalty kill being something that would be a plus if sustained. 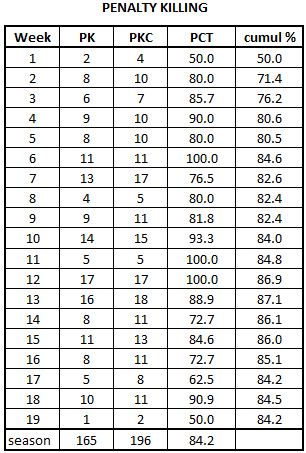 It was not so much that the Caps won just 45 percent of their draws against Detroit, but how they got there.  Jay Beagle, who started the week seventh in the league in faceoff winning percentage (57.5 percent; minimum: 500 draws) went 7-for-20 against the Red Wings and dropped back to eighth in the rankings (56.9 percent). 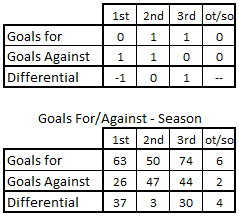 The Caps started and finished the week with the fewest goals allowed in the first period, but they did allow one to the Red Wings.  It did not eat much into their first period goal differential, which remains best in the league (plus-37), that differential being greater than the total number of first period goals scored by six teams).

The league’s bye-week experiment seems to be one for which the main outcome has been teams losing upon their return to action.  The Caps’ 3-2 Gimmick loss to the Red Wings might be considered a victory of sorts, teams combining for a record of 3-12-4 (0-8-4 in February) in their first game back after the bye.  As always, the trick will be keeping “one” from becoming “two.”  Losses, that is.  The Caps have done a very good job of precisely that, avoiding consecutive losses in their last 23 games.  Week 19 might have been a welcome week off for the players, but it did interrupt momentum, and a loss of any kind is not what either players, coaches, or fans expect or settle for.  But in the grander scheme of things, it was not the worst of all possible outcomes.