The Peerless Prognosticator is ON THE AIR!!! -- Game 32: Bruins at Capitals, December 11th

It is a mid-week matchup on national television on Wednesday night, pitting the Washington Capitals against the Boston Bruins at Capital One Arena.  These two teams sit atop the league standings, the Caps with 22 wins and 49 points, while the Bruins have 20 wins and 46 points.  The odd part of this matchup, though, is that both teams are coming off losses, the Caps dropping a 5-2 decision to the Columbus Blue Jackets on Monday in their first game at home after sweeping a four-game road trip, and the Bruins are losers of two straight, a 4-1 loss to the Colorado Avalanche on Saturday and a 5-2 loss in Ottawa to the Senators on Monday. 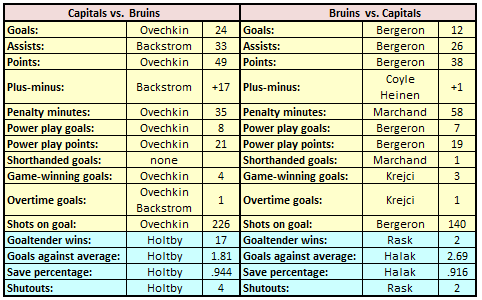 David Pastrnak has received the attention this season with his hot goal scoring start, but it is Brad Marchand with whom he is tied for the team goal scoring lead on the road at nine goals apiece.  Marchand is also the team’s points leader on the road to date with 22, tied with Connor McDavid for fourth place in the league in road scoring.  Marchand, for all his annoying qualities, has become one of the most prolific scorers in the game.  Since 2016-2017, he is one of only three players to record at least 125 goals and at least 300 points (127/316).  Mc David (131/376) and Nikita Kucherov (130/344) are the others.  When one adds suspensions and fines, Marchand stands alone as a combination of high-end production and high-end aggravation.  How aggravating?  Six suspensions in his career totaling 19 games, eight fines totaling more than $670,000, and two licking incidents.

Marchand has yet to run afoul of the league so far this season, but with him it always just seems a matter of time.  What he has done this season is produce points in bunches.  He has 14 multi-point games, tied for second in the league behind Leon Draisaitl (16).  And, perhaps not surprisingly, they are important to Bruin success.  The Bruins are 12-1-1 in those 14 multi-point games, their first regulation loss coming in Boston’s 5-2 loss to Ottawa on Monday night.  Putting up points in bunches has not diminished Marchand’s consistency.  Only three times in 31 games this season has he had consecutive games without a point. However, even with the two assists he posted against Ottawa on Monday, he has only three points in his last six games, all of them assists.  Marchand is 7-9-16, minus-13, in 30 career games against Washington.

Sometime this season, defenseman Zdeno Chara is likely to dress for his 1,000th game as a Bruin, becoming only the second defenseman in team history to do so, joining Ray Bourque (1,518).  No active defenseman in the NHL is within 7,000 minutes of ice time recorded of Chara (36,444 to 29,373 for Jay Bouwmeester).  However, he is also the oldest skater in the league at age 42, and a concession to his age is ice time.  At the moment it is Charlie McAvoy who has the highest average ice time among Boston defensemen so far this season (22:35 to Chara’s 21:21).  What McAvoy has not done with all that ice time, though, is score a goal.  He is the only one of six Bruins defensemen to dress for more than five games yet to record one this season, all nine of his points (second to Tory Krug among defensemen) coming on assists.  McAvoy is no stranger to high ice time loads. He averaged more than 22 minutes per game in each of his first two seasons.  On the other hand, he has an injury history, missing 19 games of the 2017-2018 season to heart arrhythmia and an MCL sprain and 27 games of the 2018-2019 season to a lower body injury and a concussion.

Can Tuukka Rask make it tuukka…uh, two in a row?  Rask won his last appearance against the Caps, pitching a 24-save shutout last February 3rd in a 1-0 Boston win.  It was only the second win Rask has against the Caps in his career, the odd thing about the wins being that both came via shutout.  The other came in a 3-0 win over the Caps in March 2014.  The Caps have been Rask’s personal nightmare for almost all of his 13 seasons.  Consider that against the rest of the league, Rask has a career record of 276-142-56, 2.24, .923, with 45 shutouts.  But against Washington, he is 2-11-5, 3.10, .889, with two shutouts.  Against individual teams, Rask has a higher GAA only against Anaheim (3.62 in eight games), and only against the Ducks (.886) and Vancouver (.865 in ten games) does he have a lower save percentage.  Anaheim and Caolorado are the only teams against which Rask has fewer wins (one in eight games against each team).

Rask has been unbeatable so far on home ice, at least in regulation, posting an 8-0-3, 2.05, .931 record with two shutouts.  He has been more vulnerable on the road, though, barely… 5-3-0, 2.39, .921. He has been universally stingy though, the seven complete games he has in allowing one or no goals being tied for second-most in the league, trailing only Winnipeg’s Connor Hellebuyck (nine).  Four of the instances came on home ice, three on the road.  Rask goes into this game having allowed seven goals on 57 shots (.877 save percentage) in his last two outings, both of them losses (0-1-1). 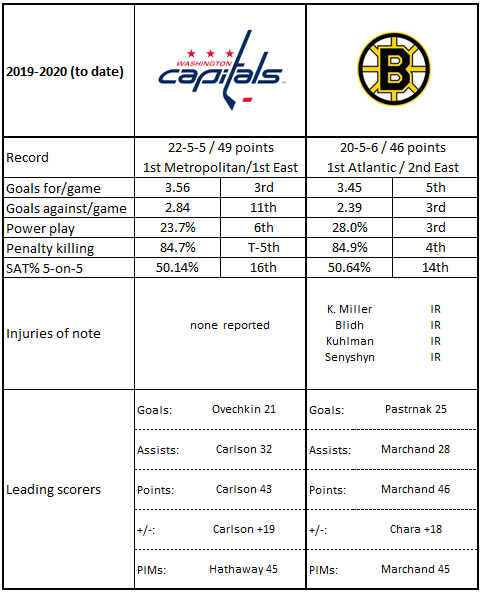 1.  Boston is the only team in the league that, through Monday’s games, is top-five in the league in scoring offense (fifth), scoring defense (third), power play (third), and penalty kill (fourth).

3.  This might be a game in which shots matter.  Both Boston and the Caps are tied for second fewest losses in regulation when outshooting opponents (two; the Islanders have one).

5.  Odd Bruins stat… they recorded 40 or more shots in road games four times so far this season and lost three of them (1-2-1).

2.  No team has missed the net more than Caps when shooting the puck this season (420 missed shots).

3.  If history is a guide, don’t turn in early.  The Caps and Bruins rank 1-2 in third period goals, Boston leading the league with 43 and the Caps tied with three other teams with 40.

Pastrnak has displayed a home-road split in his goal scoring.  In 18 games on home ice this season he has 16 goals, well clear of the 13 goals on home ice scored by Auston Matthews and Jack Eichel for most in the league.  On the road, he has nine goals in 13 games (as many as Caps’ defenseman John Carlson, but we will get to him in a moment).  That is still tied for fifth-most in the league (with, among others, teammate Brad Marchand), but it is less impressive than, say, the 15 goals scored in 17 road games by Alex Ovechkin (most in the league).

Pastrnak is certainly no fluke or fly-by-night goal scorer.  He is almost certain to be a 30-plus goal scorer for the fourth straight season and is a good bet to shatter his career best of 38 goals set last season in just 66 games.  It does raise the question of whether, at still the young age of 23, he is the next in a series of “heir apparents” to Ovechkin as the league’s premier goal scorer.  Over the last four seasons, including this one, he is second to Ovechkin in total goals scored (132 to 154 for Ovechkin), so he has to be considered a contender.  In 13 career games against the Caps, Pastrnak is 4-5-9, minus-11.

John Carlson is putting up some wild numbers early, but there is a distinct “home versus road” quality to them.  On the road he is 9-18-27, plus-17, in 17 games.  That would be first in goals, first in assists, first in points, and first in plus-minus.  And, he is shooting 18.0 percent, tops among all defensemen with at least ten shots on goal.  Only once in 17 road games did he not record a point, that in Vancouver on October 25th in a 6-5 Gimmick win.

Then there are the home games.  In 15 games at Capital One Arena, Carlson is 2-14-16, plus-2.  The goal total is tied for 37th among defensemen, the assists still rank first, the points rank second, and the plus-minus is tied for 88th.  His 4.8 shooting percentage ranks tied for 93rd (with, among others, Dmitry Orlov).  Carlson has points in eight of 15 games played on home ice.  He has been all or nothing in wins on home ice, posting four multi-point games in wins and four games without a point in wins.  He has four games on home ice with four or more shots on goal in wins, four others in wins in which he had one or no shots.

Boston does everything well – score, defend, play special teams.  The Caps just roll over opponents like Lord Juggernaut’s cart.  When the Caps beat the Bruins in Boston, 3-2 in a Gimmick, in mid-November, it was their 15th win in the last 16 games against the Bruins.  They are 11-3-0 in their last 14 games against the Bruins on home ice and will be trying to avoid consecutive losses to Boston on home ice for the first time since April 2010 and the first time losing consecutive games to Boston in regulation on home ice since the 1995-1996 season.  It is the kind of odd dominance one team has over another in team sports, even when both teams have a history of strong play otherwise.  There is little reason to think it won’t continue in a manner pleasing to Caps fans.