The Last Time... the difference between trophies and Cups 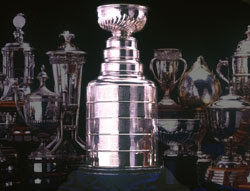 Hockey – at least as much as its major sports brethren – is a “team” sport. And part of that is its lack of tolerance for gaudy statistics among its champions. At least lately. For example, the last time…

…a 100-point scorer won a Stanley Cup was in 2009. That would be when Evgeni Malkin and Sidney Crosby each crossed the 100-point threshold in leading the Pittsburgh Penguins to a title. But don’t get the idea that it is a regular occurrence. While a Stanley Cup winner has featured a 100-point scorer in seven of the past 20 seasons, only four Cup winners had such a scorer in the last 17 seasons. On only four other occasions did the team-leading scorer on a Stanley Cup winner finish with more than 90 points. In fact, in the past 20 seasons there are only three Ross Trophy winners who added the Stanley Cup to their hardware take. Nine of the 20 Stanley Cup champions featured top scorers who did not place in the top ten among the league’s top point-getters.

We are not arguing that any player (cough-Ovechkin-cough…. cough-Backstrom-cough) should tank the last two weeks of the season to keep from getting to 50 goals or 100 points in an effort to improve his chances to win a Cup. We are just saying is that they are not particularly valuable benchmarks with respect to team success. But you knew that already… Hockey is, after all, a team sport.
Posted by The Peerless at 12:52 AM 5 comments: