These are players generally falling into the category of “role player,” those who grind in the corners, focus on defense, or provide a physical edge.  They are the third and fourth liners or third pair defensemen, or perhaps a backup goaltender, unless you are really good or really lucky in picking in these rounds, as we will see in a bit.

For the Capitals, well, it has been something of a desert compared to the fertile ground of the first round.  Over the 2001-2010 period the Caps have had 21 selections in the second and third rounds.  Seven have reached the NHL, and three of them have appeared in at least 100 games.  Here is that roster of second and third round picks (ranked by overall selection): 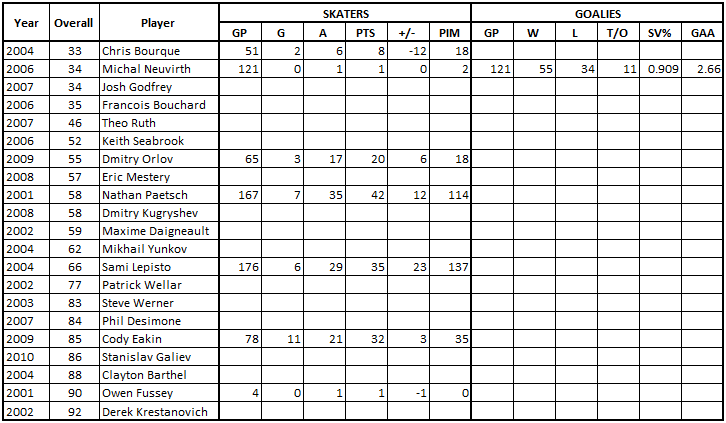 One might argue that if only a few players come out of these rounds, they still might serve as a productive source for trading assets.  In fact, the Caps have used players selected in this tranche of draft picks for just that.  Theo Ruth (46th overall in 2007) was moved to Columbus for Sergei Fedorov.  Cody Eakin (85th overall in 2009) was moved for Mike Ribeiro.  Chris Bourque (33rd overall in 2004) was moved for Zach Hamill, a former eighth-overall draft pick.

There is a common theme there.  Centers.  All three of those deals mentioned above brought back a center in return, two of them specifically to address the long-standing problem of the lack of a reliable second line center.  In all three cases, though, the solution moved on – Fedorov spent one more season in Washington before moving back to Russia, Ribeiro signed as a free agent with Phoenix after one abbreviated season in Washington, and Hamill never made it to Washington, himself traded to Florida for Casey Wellman this past January.  Wellman has 41 games of NHL experience (all with Minnesota) over three seasons.

But what of the contributors to the Caps out of this second/third round pool of draftees?  Only two players – goalie Michal Neuvirth and defenseman Dmitry Orlov – remain with the club.  Neuvirth, who is the only player drafted by the club in this group and still with the team with more than 100 games on his resume, has been in a battle with someone – Semyon Varlamov, Tomas Vokoun, Braden Holtby – for the number one goalie spot almost since his selection in 2006.  He has not, however, been able to claim the job for his own on a permanent basis, serving only the 2010-2011 season in that role and playing in only 48 games in the process, his career high.

The Caps have not had much in the way of contributions from their second and third round draft picks.  Their trading assets returned short term solutions to long-standing problems, and their “contributing” players have been few and far between.  But is that unusual, or is that ordinary in the context of the other 29 teams’ performance in these rounds?  Here is the list of teams with their history, ranked in order of total selections: 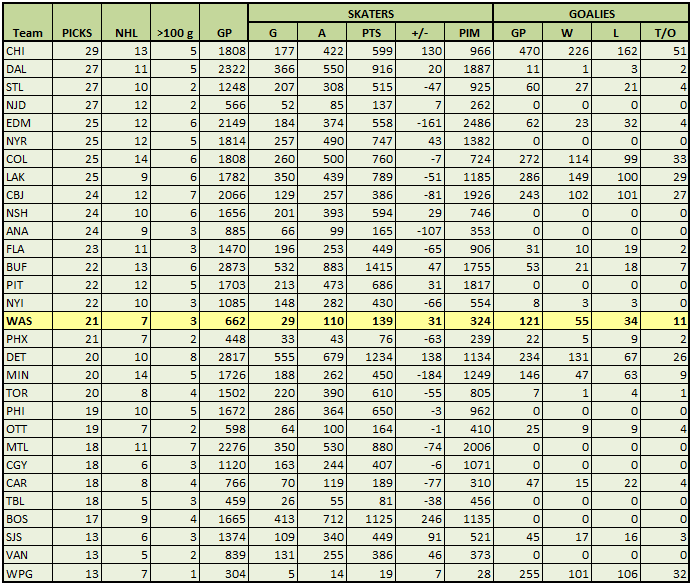 As you can see, the Caps are smack dab in the middle of the pack with respect to the number of picks taken.  Would it were true that they ranked at as high as this in the production numbers.  Among the 30 NHL teams and their second and third round picks, the Caps’ skaters rank:

They make up for it some with Neuvirth’s performance in goal, he being ranked in the top-ten in games played (eighth) and wins (seventh) among goaltenders selected.

There is another dimension to this worth exploring, that being the ability to find high-end contributors in this area of the draft.  Let’s lay down some criteria for this.  As an arbitrary marker, let us say that an “impact” skater from the second or third round would be one with at least 200 games, at least 50 career goals, and at least 100 career points.  Who qualifies? Meanwhile, the 20 second and third round skaters chosen by the Washington Capitals have a combined total of 660 games played and a combined scoring line of 29-110-139.  Cody Eakin is the only skater who could approach being a regular NHLer, let alone being an impact player.  Nathan Paetsch, who played in 167 NHL games (none with the Caps) has not played an NHL game since 2010.  He played with Grand Rapids in the AHL in 2012-2013.  Sami Lepisto, who played in 176 NHL games (14 with Washington), did not play in the NHL in 2012-2013, playing with HC Lev Praha of the Kontinental Hockey League.

In the end, even if one tries to explain away the lack of success with the point that some of these picks were used as trading assets, the games played by this cohort and combined production, wherever they landed, cannot be spun into an argument that the Caps have been successful drafting in this area.  Not that drafting is the only avenue to success in the NHL.  Of the eight teams that realized fewer than 1,000 total games played from their respective second and third round draft picks over the 2001-2010 period, six have played in a Stanley Cup final over the last dozen years, and four of them (New Jersey, Tampa Bay, Carolina, and Anaheim) won Stanley Cups.  But since the last of those teams won a Cup – Anaheim in 2007 – they have fallen on generally harder times.  The lack of new blood infusion from the next tier of draft picks might have something to do with that.

The lack of second and third round success in the draft is a matter that is especially problematic for a club that relies on the draft as its fundamental roster development tool.  If a team is not going to do well here, they almost have to hit home runs in the first round.  The Caps have done well in their first round picks, but they have lost a lot of that talent to other teams, too, as we saw in the look at those first round picks.  An inability to produce in this area of the draft – the second and third rounds – might be one of the factors in the Caps persistent difficulties in finding a solution to the second line center problem or filling out second and third defensive pairs with reliably productive players.  Other teams have found those solutions here – a David Krejci, a Paul Stastny, or even a Brandon Dubinsky.  The Caps have not.  And while one might look at a Krejci or a Stastny as an infrequent product of these rounds, the Caps have had little success in filling roles from these spots.

As a long-time fan of this club, we really do hope things improve and that the players taken in the last few drafts make meaningful and lasting contributions to the club.  But insofar as the 2001-2010 period in concerned, this has been a signature shortcoming of the draft performance of the Capitals.

Posted by The Peerless at 10:53 PM No comments: