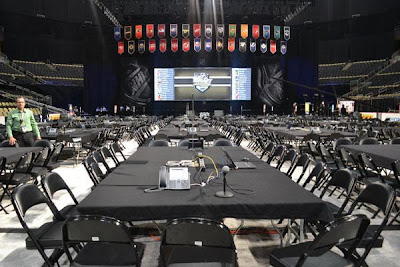 We do not earn a living as a scout, a general manager, or a media analyst of the NHL.  This makes us uniquely qualified to spout utter gibberish about who will select whom in Sunday's NHL Entry Draft.  What follows is not science.  We merely combed the four corners of the hockey universe for mock drafts from media outlets, aggregated them, and came up with a "draft of drafts."  The only tweak we made to it was to take the Colorado Avalanche at its word that they would be drafting a forward with the first overall pick.  So, let's get to it... 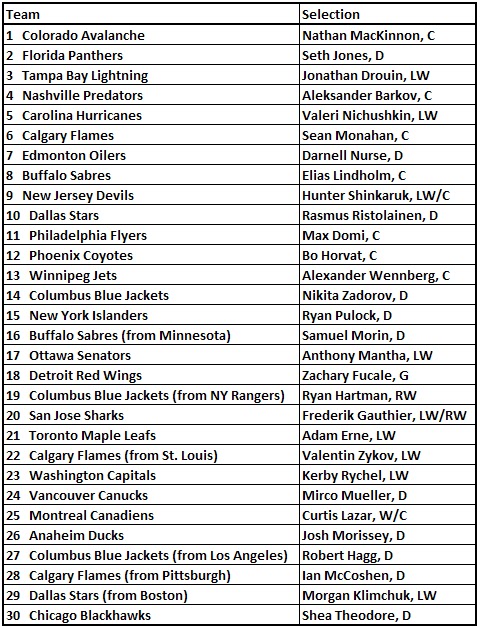 For you Caps fans, the Kerby Rychel pick at 23 is an interesting result.  Once you get past the top four picks, players who have been cemented into the top-four for a year now, Rychel was the most consistent in terms of where he was slotted.  In all but one mock draft we looked at, he was slotted between 20th and 24th overall.

Of course, now that we've said that, we don't think Rychel will be a Cap because we do not think the Caps will stay at 23.

Call it a hunch. 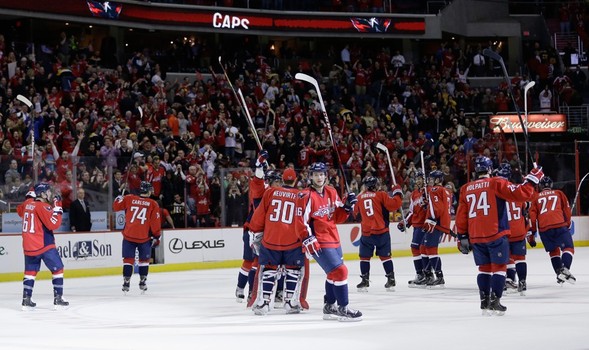 The Background:  In 1998 the Washington Capitals reached the Stanley Cup finals as representatives of the Atlantic Division of the Eastern Conference.  When they returned to the ice for the 1998-1999 season after losing to the Detroit Red Wings in the 1998 final, they did so as a member of the new “Southeast Division.”  The NHL created two new divisions – one in each conference (the Northwest Division was the new entry in the West) – and realigned teams in the new six-division format to establish (one hoped) regional rivalries.

That inaugural season in the Southeast for the Caps was not kind.  The Caps lost 511 man-games to injury, dressed a total of 37 skaters and four goaltenders, and finished third in a four-team division race, out of the playoffs with a 31-45-6 record.

Things did get better, at least in the division.  The Caps won the next two division titles and then, after a five-season drought, won four more division crowns in succession before finishing second to the Florida Panthers in 2011-2012.  Realignment was in the air, though.  When the Atlanta Thrashers moved to Winnipeg following the 2010-2011 season, the die was cast.  All that seemed left was to make realignment a reality.

After fits and starts (the NHL Board of Governors actually approved a realignment plan in December 2011, but the players association rejected it a month later), the realignment plan finally fell into place to the satisfaction of the league and its players, finally approved in March 2013.  Whoever won the Southeast Division in 2012-2013 could put on its letterhead “Last and Forever Champion of the Southeast Division.”

Why it mattered:  Oh, yeah…the game.  By late April the Caps had climbed all the way back from their dismal 2-8-1 start.  With a record of 23-10-1 since that start, they were poised to clinch that last division title if they could get past the Winnipeg Jets, themselves hanging onto hope for a playoff spot by their fingernails.

Things looked good for the Capitals early.  It started with Matt Hendricks barely three minutes into the game.  And what an effort it was.  First, Hendricks was knocked to the ice at the Jets’ blue line by Chris Thorburn as he was dumping the puck to the corner.  He got up, pursued the puck to the corner where Jay Beagle and Ron Hainsey were battling over it.  Hendricks beat Antti Miettinen to the loose puck, circled out, took a couple of steps down the goal line, and shot the puck off the shoulder of goalie Ondrej Pavelec and in for the game’s first goal.

The Caps were about to stick a fork in the Jets’ season late in the period.  Mathieu Perreault won a race to the puck below the Winnipeg goal line.  After working a give-and-go with Jason Chimera,  Perreault set up behind the Winnipeg net as Chimera went to the front of the cage.  With Winnipeg’s defense keeping their eyes on Perreault, he slid the puck in front to Chimera, who took two swipes at the puck, the first stopped by Pavelec, but not the second.  Chimera’s goal at 17:53 put the Jets behind the eight-ball at the first intermission, 2-0.

If the Caps stuck a fork in the Jets, they found that the roast was not quite done.  The Jets tied the game, first on a goal by Evander Kane just 16 seconds into the period, then again at 14:48 when Blake Wheeler one-timed a pass by Nik Antropov past goalie Braden Holtby from point blank range in the low slot.

Then it was Winnipeg’s turn to see momentum stolen away.  Just 37 seconds after tying the game, Nicklas Backstrom converted a centering feed from Alex Ovechkin, redirecting the pass past Pavelec to put the Caps back in front with 5:02 left in the period.  Less than three minutes later the Caps’ two-goal lead was restored.  Mathieu Perreault started and finished the scoring play. He started it by leaving the puck for Eric Fehr as he was crossing the Winnipeg blue line.  Fehr could not control the puck though, his stick lifted by Alexander Burmistrov before he could get control.  Jack Hillen jumped up, though, and ripped a shot toward the Jet’s net.  Pavelec stopped the shot, but just outside a clot of bodies fighting for the loose puck,  Perreault, dug it out and flipped it into the net to make it 4-2.

The Jets would not go away, though.  Nik Antropov cut the lead to one when he scored mid-way through the third period to make things uncomfortable for the Caps.  That would be as close as the Jets would get, though.  Alex Ovechkin put an exclamation point on the win with an empty net goal with 28.3 seconds left, the Caps skating off with a division-clinching 5-3 victory.

The Takeaway:  Eleven games into the season Caps fans were ready to start wondering, “Seth Jones or Nathan MacKinnon?”  In Game 46 of the season they were now pondering first-round playoff matchups. It was quite a comeback by the Caps, but perhaps possible only in a division in which three teams finished 13th, 14th, and 15th in the conference.  The Caps would be the primary beneficiary of those struggles among Southeast Division teams, going 15-3-0 in the division for the season.

The Caps would win their seventh Southeast Division title in 14 seasons, their fifth crown in six years.  Over the 14-season history of the division the Caps would compile a 185-100-42-2 intra-divisional record.  That works out to an average of 103 standings points per 82 games.  They were the class of the division, winning at least ten games against division rivals in 12 of those 14 seasons.  In 2013 they would enter the post-season as the number-three seed in the Eastern Conference.  But behind the banner as division champion was the dark cloud.  In those 14 seasons representing the Southeast Division, the Caps reached the playoffs nine times, never moving past the second round in any of them and being eliminated in the first round six times. That, however, was a concern for another day.  On this night in late April the Caps returned to the place they occupied more frequently than any other team in the history of the Southeast Division.  It was a place few thought the Caps would occupy when they were struggling in January and February.  That is why this game mattered in the 2013 season.