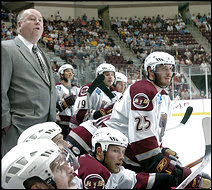 "If you would attain to what you are not yet, you must always be displeased by what you are. For where you are pleased with yourself there you have remained. Keep adding, keep walking, keep advancing."

Glen Hanlon has spent 751 games in the NHL as a player and a coach, most of that in service of teams that struggled on the ice. But Hanlon is certainly no loser, despite what you might read into what is being posted on some fan sites on this holiday. Hanlon, who was relieved of his duties today after last night’s 5-1 loss to the Atlanta Thrashers, was probably the right guy to oversee the Capitals as it took its first tentative steps out of the depths of its struggles in 2003-2004. His even-keel disposition and patience with a club that would have had Casey Stengel repeating his plaintive question, “can’t anybody here play this game?” allowed some of the younger guys the chance to get their legs under them at the highest level of play.

For whatever reason, though, Hanlon seemed ill-suited to the next phase in the Caps’ development. A club with as much talent – at least on paper – as this might not be a bona-fide Stanley Cup contender, but they had no business being 6-14-1 and on a pace for their worst season in 30 years. The match was no longer there between what the club needed and what Hanlon could provide.

For the Caps, it falls now to Bruce Boudreau to make some sense out of this club. The Hershey headmaster gets his first NHL gig in a difficult circumstance, but therein lies an opportunity. He has the title of “interim” head coach, and one can’t know if that means “until the Caps hire a full time replacement shortly,” or if he’ll hold that title for the rest of the year. Should it be the latter, the playoffs are a long shot at best, but if he can bring this club to respectability and at least give fans a reason to be optimistic at year end, he will more than have done his job. The underlying concern though, is that this will be the third consecutive AHL coach hired to take the reins here. We’ll admit to harboring that concern. But after thinking about it and reading what Mike Vogel had to say about it, we think it important to look at Boudreau’s record on its own:

If someone can make this situation work, it is Boudreau.

In Glen Hanlon, the Caps lost the services of a coach who exhibited decency and a concern for his players. There are coaches in this league who might have been inclined to throw a player under the bus in an effort to promote himself or to save his job. Hanlon, to his credit, was not that coach. He would express his displeasure with players in ways that mattered – cutting back on their ice time or having them take a seat in the press box – but never did he call out his players in public. He was a player’s coach and should not be faulted if what was called for this year was a sterner hand.

In Bruce Boudreau, the Caps get a winner, a coach who has accomplished all there is to accomplish at the minor league level. He arrives at a crossroads for the club. Many of the players that make up the core of the “rebuild” played for Boudreau at Hershey and succeeded under his direction. Whether those players – or Boudreau, for that matter – can recapture that magic is going to go a long way to determining whether the future is bright, or just a mirage.

To both Glen and Bruce, good luck.