The Peerless Prognosticator is ON THE AIR!!! -- Game 35: Capitals at Devils, December 31st

Washington Capitals wrap up their home-and-home set with the New Jersey Devils in Newark on Saturday afternoon, looking to clean up the mess of sorts they left on the ice at Verizon Center on Thursday night.  Against the Metropolitan Division’s weakest team, the Caps left a standings point on the table when they managed to put just one puck past backup goaltender Keith Kinkaid on 44 shots in the hockey portion of the contest and another two shots in the freestyle competition.

For the Devils part, they scored only one goal of their own, which made it six times in the last ten games that New Jersey’s offense was held to one or fewer goals.  Over those ten games, the Devils are 2-7-1 and have averaged just 15 goals in the process.  This is a team with severe scoring issues, even without considering the absence of second-leading scorer Taylor Hall (lower body injury).

P.A. Parenteau’s fifth goal in the ten-game stretch, most on the club over that span, was the Devils’ only goal in their 2-1 Gimmick win on Thursday night against the Caps.   Parenteau has been a consistent goal scorer over his nine-year career, averaging just under 20 goals per 82 games.  If there has been an issue about his play, especially in recent years, it is availability.  Since appearing in all 48 games in the abbreviated 2012-2013 season, Parenteau has missed 60 games over just under three-and-a-half seasons.  The absences were the product of a myriad of causes – knee, upper body, concussion, upper body injury again.  He did appear in 77 games for the Toronto Maple Leafs last season and has missed only two games for the Devils so far this season.  If he can continue his good health, he is on a pace to record his third 20-goal season of his career.  He is 5-7-12, plus-6, in 15 career games against Washington.

Adam Henrique leads the Devils in total scoring over their last ten games (3-4-7).  With nine goals this season, he remains below his goal scoring pace of last season (30 in 80 games, his first 30-goal season), but his points pace ((46) would be right in line with his career points pace per 82 games coming into this season (48).  It would be hard to replicate last year’s goal scoring pace based on his shooting percentage.  Last season, Henrique potted 30 goals on 149 shots, a 20.1 percent efficiency.  That mark was second in the league among 319 players recording at least 100 shots.  This season his shooting percentage is down to 14.8 percent, a bit lower than his career shooting percentage going into last season (16.6 percent).  Henrique is 4-4-8, minus-11, in 19 career games against the Caps.

Also contributing three goals over the last ten games is forward Miles Wood.  Known more recently as a fan of Alex Ovechkin as a youngster, Wood has made a decent impression in his rookie year.  The 100th pick taken in the 2013 entry draft, has four goals in just 17 games so far this season, which makes him almost a reincarnation of Patrik Elias (the leading goal scorer in Devils’ history) on this team.  If there is an odd part to his goal scoring, it is that three of his four goals have come on the road (good news for Caps fans, given this game will be played in Newark).  Wood showed an early propensity to take penalties (minor penalties in four of his first five games this season), but he had toned that down to a degree, the only blemishes on his compliance with the rules over his last dozne games being one minor penalty and a fighting major stemming from a scrap with former Cap Steve Oleksy in the Devils’ 4-1 loss to Pittsburgh on December 23rd.  He did not have a point in his first career appearance against the Caps on Thursday. 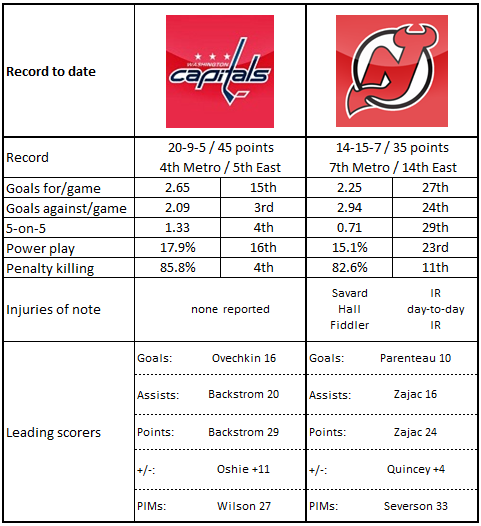 1.  The trend of scoring one or no goals by the Devils is a recent one.  While they have those six games in their last ten in which they recorded one or no goals, they only have ten such games all season.  They are 1-8-1 in those games, the only win coming against the Caps.

2.  Shooting is a more persistent issue for New Jersey.  No team has had more instances of games with 30 or fewer shots on goal than the Devils (25).  While ten of those instances have come on home ice, it has not been too much of a burden in terms of wins and losses being a result.  New Jersey is 6-3-1 in home games in which they recorded 30 or fewer shots.

3.  New Jersey might suffer from low scoring on their part, but they have not been able to consistently apply tight defense.  Only Colorado and Arizona have more losses this season by three or more goals than the nine such losses suffered by the Devils.

4.  The Gimmick win by the Devils over the Caps on Thursday night was the 14th time in 36 games that a game was decided in extra time.  New Jersey has a record of 7-7 ion extra time games this season, the trick shot win over the Caps being the first time this season they won in the Gimmick on the road.

1.  Fifth goaltenders have faced at least one shot in the freestyle competition this season.  Braden Holtby ranks 48th among that cohort in save percentage (.357).  He trails 47th-ranked Peter Budaj by more than 100 percentage points (.462).  Let’s try to avoid this part of the game.

4.  There is a certain balance to the ice time the Caps have had at the player level.  No forward on the club is averaging as much as 19 minutes of total ice time per game (Alex Ovechkin: 18:45).  No forward is averaging less than ten minutes per game.

Although his career has been split between the Vancouver Canucks and the New Jersey Devils, there is a hint of Olaf Kolzig in the career of Cory Schneider.  A 26th-overall draft pick of the Canucks in 2004 (remember that Kolzig was a 19th-overall pick of the Caps in 1989), it would be another four years until Schneider reached the NHL and didn;’t appear in more than 20 games in a season until six years after his draft year (while Kolzig reached the NHL sooner, relative to his draft year, it was seven years until he has a season with more than 20 appearances).  Schneider, like Kolzig, played for a club that reached a Stanley Cup final, but soon after, again like Kolzig, found himself toiling for a club that had seen better days.

Despite being among the most talented goalies in the game, this is where Schneider, the heir to Martin Brodeur, finds himself.  His numbers with the Devils (2.25/.921) are almost indistinguishable from those he posted with the Canucks (2.20/.927) but his win loss record in New Jersey (79-83-32) is far less successful than that which he had in Vancouver (55-26-8).  Such is the case with a team with scoring issues trying to bring along younger players.  But Schneider remains a formidable presence in goal, capable of stealing a game out from under an opponent.  On the other hand, there have been cracks in his armor lately.  In his last eight games, Schneider is 1-6-1, 3.61, .885, and he has allowed four or more goals six times in that span.  He is 3-5-2, 2.36, .915, with out shutout in 10 career appearances against the Caps.

Okay, so T.J. Oshie was stopped on a trick shot attempt on Thursday night, the first time in four attempts this season he was denied a score.  But what is of more concern is the goal scoring in the hockey portion of the game.  Since he had a pair of goals and a pair of assists in a 7-1 win over Pittsburgh on November 16th, he is 2-1-3 in his last 11 games and is on a five-game streak without a point.  One gets the feeling he might be coming out of that funk, though.  What characterized the early stage of this slump was a lack of shots on goal.  After the Penguin game he has just seven shots on goal in five games.  However, he has 16 shots in his last six games, and has had shot totals increase on a game-to-game basis over his last five games (he had four shots on goal on Thursday against the Devils).  Oshie is 1-1-2, minus-1, in nine career games against the Devils.

One has the uncomfortable sense that resourcefulness is going to be an issue that the Caps will need to address in the last half of the regular season and as they prepare for the playoffs.  When the Devils threw up a wall at the blue line or collapsed back to protect their net on Thursday night, the Caps seemed to have no answer.  The goal the Caps scored was of the shorthanded variety, not the product of well-implemented offense.  The Caps have too many tools and weapons to have this be a lingering problem, and it suggests that this is going to be a coaching issue as much as anything.  The first order of business in that regard is to take the lessons learned from Thursday and find ways to penetrate what is likely to be another case of stifling defense and boring strategy employed by the Devils.  The Caps need to find a way to impose their will on an opponent rather than settle into playing their game.