The Price of Success

At the risk of invoking comparisons to Oscar Wilde and this quote...

"A cynic is a man who knows the price of
everything but the value of nothing."
...we note that the Caps' success last season comes with a price. It is the price of keeping the "core" pieces of the puzzle in place, as this look at the cap hits of 2007-2008 and 2008-2009 suggest: 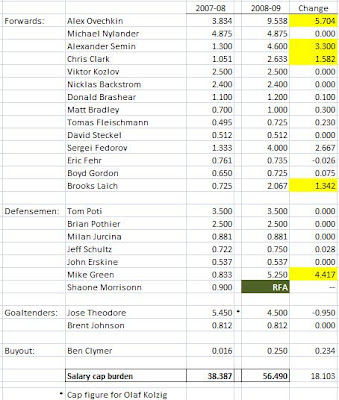 Five years ago, this club was a wreck, and the disappointment of failure was being worn openly. This club didn't disappoint anyone last year (except perhaps those who now feel that there is unfinished business to take care of) and has the look of another club that went from basement to Stanley Cup final in two seasons.

It is a club that has followed a plan -- draft well, keep that core together (note those amounts in yellow above), add pieces through trade or free agency as needed.

Taking a page from the history of political discourse in this fine nation of ours, the Tampa Bay Lightning are having a town meeting...so reports Damian Cristodero of the St. Petersburg Times:

Oren...Len signed a guy, and he picked Mark Recchi...you going to let him sign another? Maybe Stu Barnes? Or Kevyn Adams, as long as you're doing the Memory Lane Forward Tour?


You signed or traded for 11 forwards -- so far. You traded two defensemen to get...two defensemen and added two additional defensemen in other deals. My question is, when you go out to eat, you order six main courses and no sides, don't you?

Coach Melrose...you haven't been behind an NHL bench in more than a dozen years. You don't have a .500 season in the NHL with a roster that didn't include anyone named, "Gretzky." You going to try to convince Oren and Len to bring Wayne over from Phoenix?

Is it true Jay Feaster's new duties include doing in-game entertainment as Thunderbug? If "Feasterbug" doesn't work out, will your new mascot be... 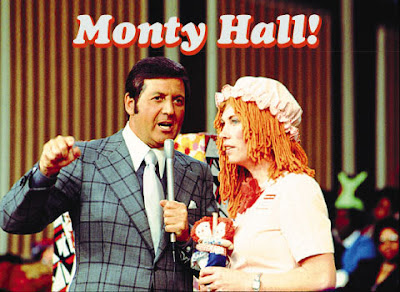