The Peerless Prognosticator is ON THE AIR!!! -- Caps vs. Ducks, November 19th

It’s off to Anaheim for a tilt with the Mighty Ducks, and since we don’t get out here too much, we thought we’d take advantage of the tips and tricks learned by that holiday road warrior, himself…Clark Griswold. Clark, thanks for having us along. Are you anxious to get a chance to see Alex Ovechkin and the Caps?…

“Well, it’s like I told my wife, ‘It's living history, Ellen. But if you'd rather see your cousins...personally I'd rather see a pile of mud than Eddie.’”

The Caps are playing the first game of a western road trip. They’ve been very good at home, but they’ve struggled on the road. You’re an experienced road-tripper, Clark. What do you tell the boys?

“The old west was dirty. Everything isn't like home. If everything were like home, there would be no reason for leaving home. Right, Rusty?”

Clark, I know you’re something of a hockey fan, and you know that the season is no “vacation,” so to speak, but you also know it’s not all grim faces and such. What do you tell the boys in an effort to balance the two?

“I'll tell you something. This is no longer a vacation. It's a quest. It's a quest for fun. I'm gonna have fun and you're gonna have fun. We're all gonna have so much f**king fun we'll need plastic surgery to remove our goddamn smiles. You'll be whistling 'Zip-A-Dee Doo-Dah' out of you're a**holes! I gotta be crazy! I'm on a pilgrimage to get a Cup. Praise the Stanley Cup!”

Well, the Caps have been "zip-a-dee-doo-dah-ing” at home, but now they’re touring the west hoping to add to the pile of wins they’ve been stacking up lately.

In Anaheim, the local hockey team might have discarded the word “mighty” from their name, but not from their play. The Ducks started the year poorly, losing their first four and five of their first six, but have since gone 9-2-2, averaging 3.3 goals a game in the process, while giving up 2.8 goals. Their overall performance looks like this... 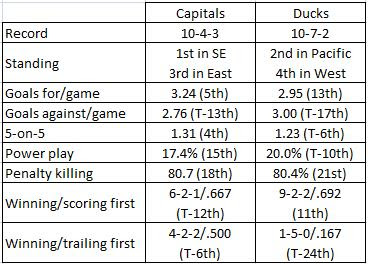 While the Ducks have been scoring and allowing goals at a somewhat brisk pace, one thing about th

eir game remains a constant. The Ducks that led the NHL with 17.8 penalty minutes a game in their Stanley Cup-winning year of 2006-2007 don’t lead the league in PIMS thus far, but their 19.5 penalty minutes a game is still good for fourth in the league. Their 20 fighting majors is tied with Vancouver for the league lead. In fact, the Ducks might as well practice at the Kronk Gym (if it wasn’t in Detroit) as at Anaheim ICE. Nine different players have fighting majors, led by George “Did You Like Me As An Extra in ‘The Magnificent Seven’” Parros, who has five.

As far as actual hockey type skills are concerned, Washington has its “Young Guns,” but Anaheim has its Dynamic Duo of Ryan Getzlaf and Corey Perry. The two have combined for 13 goals and 29 assists to take the top two spots in the Ducks’ scoring ranking. Getzlaf got off to a rough start, going 0-1-1, -5 in his first six games, but he is 7-14-21, +9 in his last dozen contests. He had a five points game (0-5-5) against Detroit on October 29th. He hasn’t had much experience against the Caps, notching an assist in two games against Washington.

Teemu Selanne, who (contrary to urban legend) did not skate along Wayne Gretzstone for the Bedrock Neanderthals of the Pangaea Hockey League, is still contributing at age 38. He leads the team with nine goals, which also ranks in the top dozen in the league. Having played in the Western Conference for his entire career, he doesn’t get many looks at the Caps, but he’s made the most of his opportunities. In 21 career games, he is 17-16-33, +22.

The former Cap angle is covered by Brian Sutherby, who is the sixth-ranked scorer on this team (3-3-6). He’s also second in plus-minus (+6) and tied for third in fighting majors (three). All this for 7:21 a game in ice time (only Brad May and George Parros have less). This will be his first matchup against his former team.

On defense, the Ducks have a solid group led by Chris Pronger, Scott Niedermayer, and Francois Beauchemin (who is on injured reserve and is out for the rest of the year), who have combined to go 10-19-29. But the Caps might be renewing acquaintances with an old adversary, too. Bret Hedican, who played for ten seasons in the Southeast Division with the Panthers and the Hurricanes, could be playing in his 999th career game tonight. 50 of those have been against the Caps, in which he is 3-7-10, -6.

In goal, chances are that the Caps will see Jean-Sebastien Giguere, who has spun off into a ditch in his last three games. After winning six consecutive decisions in seven appearances (his no-decision being one in which he was pulled after allowing four goals on 13 shots against Vancouver), he is 0-2-1, 4.51, .851, in his last three and was pulled against Dallas after once more allowing four goals on 13 shots. In fact, the six winning decisions in a row is somewhat misleading. Giguere has allowed four goals in each of five games out of his last ten, displaying an inconsistency that has crept into his game this year. In 15 appearances, he has two shutouts, but he also has allowed at least four goals eight times. It is little wonder that his overall numbers – 3.21 GAA and .905 save percentage – rank in the lower half of the NHL rankings. He has had success in his limited experience against the Caps, though – 3-1-0-1, 1.39, .951, with two shutouts. One gets the feeling he’s going to be very, very good, or very, very bad.

If it isn’t Giguere and his inconsistency, it might be Jonas Hiller and his comparative lack of experience. Hiller is 3-1-1, 2.18, .926 and a shutout in six appearances this year. He was 10-7-1, 2.06, .927 in 23 appearances last year, so he’s at least mastered the job of being an effective backup. If Giguere continues his ups and downs, Hiller might be getting more responsibility. He has never faced the Caps.

In 2006-2007, Pahlsson anchored what we thought was a benchmark “in your face” line. Last year he missed 26 games to a sports hernia. He’s apparently healthy again, and he could be called upon to help shut down the hottest Caps – the numbers one and two stars in the NHL last week, Nicklas Backstrom and Alex Ovechkin. It will be a tall order.

Anaheim relies on physical intimidation as a part of their strategy. That is something not limited to fighting heavyweights, but is something that pervades their roster. That could make the contributions of a player such as Bradley important, not so much for dropping the gloves, but for standing firm against the style the Ducks choose to play. Washington has a lot of skill guys who do not, as a rule, relish contact. It would be expected that the Ducks will test this early and often. Bradley is a guy who can help even the odds.

This is as clear a contrast in styles as one is likely to see – Anaheim’s in-your-face, bare-knuckled approach versus the Caps attacking with waves of skill and speed. It will be important for the Caps not to fall behind. Anaheim is undefeated in seven games in which they have carried a lead into the final period. If the Caps can withstand the figurative (or literal) punch in the nose they’ll get early and post a goal or two, this will be a much easier task, especially against the inconsistent Giguere. It’s like the song in the movie…

Jack be nimble, Jack be quick
Take a ride on the West Coast kick… 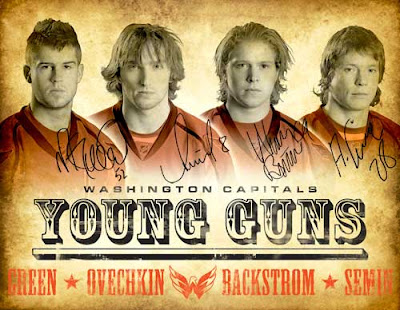 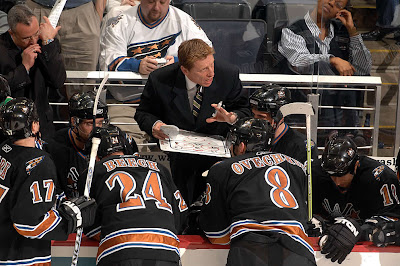