The Peerless Prognosticator is ON THE AIR!!! -- Caps vs. Thrashers, October 22nd

It’s Thursday, and the Caps have hit the road. But while the boys have been packing for a trip to Atlanta for this evening’s game, the cousins paid us a visit…

“Yeah, well, guess our high-falutin’ cousin was too big to have us over after he got us to slam some words together for his preseason prognostications…”

“Right you are ‘cuz. Of course, us drinkin’ all his beer and cloggin’ up his terlet probably didn’t help any.”

All is forgiven boys… but I take it y’all have been busy the last month.

“Absolutely. I got this new calculator, and I’ve been playing with some numbers."

“Hush up… now here’s one. Mikael Samuelson is second in the league right now with 4.75 shots per game. If he keeps doing that for the rest of the season, he’ll end up with 390 shots. He’ll also end up 235 shots behind Alex Ovechkin, who is on a pace for 625 shots."

“Thanks… Here’s another. Evgeni Malkin and Sidney Crosby have eight goals between them. Alex Ovechkin has nine.”

“Ya didn’t need no calculator for that, cuz’.”

OK, boys. What else do you have, Fearless?

“Joe Thornton has 12 assists. If he keeps that pace up, he’ll finish with 109. But that would only get him into the top-ten single season best… barely. He’d be tied for tenth with Wayne Gretzky, who did it twice. But he would be the only center not named Gretzky or Lemieux to get over a hundred.”

“Bet ya had to do a logarolling to come up with that.”

Anything else on the Caps?

“And how many did he have here?”

Guess Cheerless is still bitter over the Jagr era here in DC. Meanwhile, the Caps visit the Thrashers, and it should be a rip-roaring end to ender. The Thrashers are in the midst of a franchise-tying-best start to their season at 4-1-1. It’s not as if they’re doing this with smoke and mirrors, either. The Thrashers’ opponents, exclusive of games played against the Thrashers, are 19-13-4 so far this season, and only one – Montreal – has a sub-.500 record. The Thrashers’ numbers are equally impressive (before last night's games)… 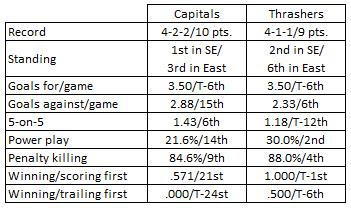 One number from that table above screams off the page – 2.33. That is the goals allowed per game so far by Atlanta, good for sixth lowest in the league and more than a goal a game (1.07) better than their comparable number at the end of the 2008-2009 season.

The reason for that might be an injury. Kari Lehtonen – he of the considerable potential and underwhelming performance in his career to date – had off-season back surgery. He has not returned, and the team doesn’t seem to miss him (or have much intention to reinstate him for the time being).

And that has meant giving Ondrej Pavelec a shot. Pavelec is another one of those guys with “potential” stenciled onto his resume, although he didn’t arrive with nearly the fanfare that accompanied Lehtonen, who was the second overall pick in 2002. He had been plagued by his own bouts of inconsistency as he climbed the Thrashers organizational ladder. He was 33-16-3 (2.77, .911, and two shutouts) in leading the Chicago Wolves to a Calder Cup. The following year he split time between Atlanta (3-7-0, 3.61, .880) and Chicago (18-20-2, 2.58, .910), when he seemed to take a step backward.

But this year, he is off to a hot start – 3-1-1, 2.37, .929. On a team that plays a pressing offensive style similar to Washington (with whom Atlanta is tied in goals scored per game), those are rather impressive numbers.

On the other side of the ledger, this would be the place where we would extol the virtues of the face of the franchise – Ilya Kovalchuk. Well, OK, he has seven goals to lead the club – no surprise there. And he is tied for the team lead in points with eight. But it is that fellow with whom he is tied – Rich Peverley – who is something of a surprise. Peverley, who was claimed on waivers from Nashville last January, has averaged almost a point a game (17-26-43 in 45 games) since joining the Thrashers. What’s more, in those 45 games he has seven game-winning goals, more than Kovalchuk has had in the past two full seasons with Atlanta (six). He will be one to watch. Last year in four games against the Capitals, Peverley was 2-2-4, plus-1.

After the star Kovalchuk, and the unsung Peverley (well, maybe a little “sung”…he just signed a multi-year extension with the Thrashers), the watch-word for Atlanta is, “balance”… sort of. No Thrasher has more than eight points, but 18 skaters have at least one. What that means is that skaters seem to take turns feeding Kovalchuk and Peverley, who have accounted for 11 of Atlanta’s 21 goals.

Seven of those 18 skaters have at least four points. Three of those players are among the six newcomers who skated in the Thrashers’ last game who were not on the ice in Atlanta’s last game of the 2008-2009 season. Evander Kane leads that group with 2-2-4, making his debut in the NHL after being selected fourth overall in last June’s entry draft.

Pavel Kubina, who is no stranger to Caps fans after having spent eight seasons with Tampa Bay, is another of the newcomers with four points (all assists) coming into this game. In 49 games against the Caps in his career, he is 3-16-19. He opened the season with an assist in each of the first four games, but he has been held off the score sheet in the last two.

Nik Antropov is new to the Thrashers, too, having spent last year split between Toronto and the New York Rangers. He has also posted four assists, two of which came in a 4-2 win over Buffalo last Saturday. In 25 career games against Washington, he is 7-10-17.

And contrary to the thought that all Russians end up in Washington, Atlanta signed Maxim Afinogenov to a one-year, $800,000 contract on the eve of the new season after skating with the club on a pro tryout and fighting an illness. He has a goal and two assists in six games thus far, but he is also a team-worst minus-4. Last year, he had a total of six goals on the season. Two came against Atlanta, two against Washington. Seeing as how he is now skating with the Thrashers, the possibility of his being a source of torment for the Caps can’t be neglected.

So here we are eight games in, and it is the Atlanta Thrashers – a team that finished last year 13th in the Eastern Conference – that is challenging the Caps for the division lead. They did play the Caps tough, though, winning two of the three games at home against the Caps last season and outscoring Washington in those three games by a 16-11 margin.

If you were to look at the principals in this divisional matchup – Alex Ovechkin and Ilya Kovalchuk – it would suggest that this was going to be a mad dash up and down the ice to see which Russian could top the other. Ovechkin is 23-26-49 in 30 career games against Atlanta, while Kovalchuk is 22-28-50 in 42 career games against Washington. And chances are, each will be keeping tabs on where the other is on the ice. But Washington is more than Ovechkin (with two other players – Nicklas Backstrom and Alexander Semin – on a pace to top 100 points), while the Thrashers are more than Kovalchuk (tied with the Caps in goals-per-game using a balanced, pressing attack).

It will be a high scoring game, but the Caps have too many weapons and will put the Thrashers in their place…