Your Peerless Prognostos for the Western Conference Final -- Detroit (2) vs. Chicago (4)

And now, for the western half of the finals…

Experience. Coming into these playoffs, the Chicago Blackhawks who have skated thus far in the post season had a total of 197 games of playoff experience among them, and 64 of that came from Samuel Pahlsson – a late season pick-up from Anaheim. For the Red Wings, defenseman Nicklas Lidstrom came in with 214 games of experience… himself. Of the 22 skaters for the Red Wings thus far in the playoffs, six had more than 100 games of playoff experience coming into this year's tournament (Lidstrom, Tomas Holmstrom, Brian Rafalski, Kirk Martby, Kris Draper, Chris Chelios).

Chicago has no fear of the Red Wings. They fought them to a draw in six regular season games (2-2-2) and won the last two contests of the season. And, there is the matter of the grueling seven-game series the Wings played against Anaheim, perhaps the most physical team in the final eight. If Chicago – a younger, high-octane team – can steal a win out of Detroit from the first two games, it might be just the crack the Blackhawks can exploit. Chicago certainly poses a different set of challenges for a team that had goaltending issues in the regular season – they can score goals (3.17/game in the regular season, 4th in the league). Chris Osgood wasn’t facing the 1984 Edmonton Oilers in the first two rounds. Anaheim finished 14th in scoring, Columbus finished 21st.

Franzen scored more points against only one team (St. Louis) than he did against the Blackhawks in the regular season (3-2-5) in six games. He is the leading scorer for the Red Wings so far in the playoffs (8-7-15 in 11 games). He has the sort of size that can pose problems for the Blackhawks down the middle, and he has the hands to finish. He has points in 10 of 11 playoff games thus far. He hasn’t gone more than two consecutive games without a point since early January.

No worries. They weren’t supposed to get this far, even as a fourth seed. And now, they get to skate. The first two rounds – against Calgary and Vancouver – were probably more physical than anything the Red Wings are likely to throw at them. And, the Blackhawks lit up two goaltenders that, on paper, are far higher in class than what they’ll face in Chris Osgood. 19 goals against Miikka Kipprsoff (3.52 GAA) and 21 against Roberto Luongo (also a 3.52 GAA). The Blackhawks can score with anybody.

They can’t score if they don’t have the puck. Detroit has allowed the third fewest shots on goal in the playoffs (27.5). Chicago is second, you say? Well, yes, they are. But what favors Detroit here is how they got to their number. Their shot differential of +12.7 is, by far, the best of any team advancing this far. This sort of thing has the effect of choking the life out of an opponent. In the last two seasons, the Red Wings have played nine games past Game 4 in a series. They are 6-3 in those games. Do the Blackhawks have the stuff to last?

Among the goalies playing in the final eight, Khabibulin has the worst save percentage (.896, the only sub-.900 in the group). Good thing Chicago has allowed the second fewest shots on goal per game. Detroit will test Khabibulin in ways that Calgary and Vancouver didn’t. He had a superb save percentage against the Red Wings in three games this year (.932), but the Blackhawks allowed him to face 133 Red Wing shots in those games (39.7 shots-per-60 minutes). If Detroit is getting those kinds of shot totals in this series, it could spell doom for the Blackhawks, unless Khabibulin steps up his shot-blocking production.

The young and the old – the Red Wings were the oldest team in the final eight, the Blackhawks were the youngest. Guess the questions are, “are the Blackhawks too young?” and “are the Red Wings too old?” Well, we don’t think it will come down to that. The common thread between these teams is that both have done very good jobs at masking otherwise pedestrian performances in goal, given the settings (yeah, Chris Osgood has a .921 save percentage, but we’re not thinking Columbus or Anaheim are offensive juggernauts, either). Both have managed to do it by their parsimonious allocation of opponents' shot opportunities. But Detroit’s result is more a product of the style of play they impose on games – keeping the puck and overwhelming teams with their own shot volumes (40.2/game is by far the highest total in the final eight).

This argues for Detroit being able to cobble together four wins faster as a product of the comfort level and consistency they have in playing the style they play. They will be better able to impose a style on games, even if the Blackhawks want to play an up-tempo pace of their own.

Your Peerless Prognostos for the Eastern Conference Final -- Pittsburgh (4) vs. Carolina (6) 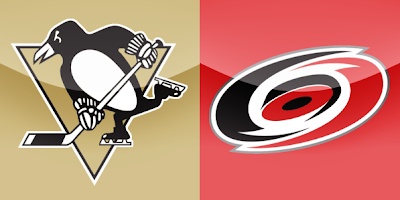 The Caps-less round three begins…

Sidney Crosby is on a mission. 12 goals in 13 games. Now, he didn’t do it against the sturdiest defensive squads in the East, but he’s not playing against such a group in the conference final, either. In fact, Carolina’s defense might resemble Washington’s a little too much for the Hurricanes’ tastes for this series -- not physical enough down low. And Crosby had eight goals against the Caps. As if we needed another Crosby nugget, he went 1-6-7 in four games against Carolina this year.

Looking for someone to come out of the blue? Ruslan Fedotenko was 3-1-4 in four games against the Hurricanes this year. And, he had points in four of his last five games against the Caps in the second round (3-2-5).

The Penguins did not play formidable teams in the first two rounds, at least in terms of their recent play, respectively. Philadelphia finished the season 11-10-1 after the end of February, leading up to their first round loss to the Penguins. The Caps – if you buy into the “Southleast” Division description of where they play – played a bunch of patsies the last month (10 of their last 13 games were against Southeast Division teams, against which they went 7-3-0) and struggled against a punchless Rangers team in the first round. This won’t be the case with Carolina – 13-3-2 since the end of February in the regular season and victors over two higher-seeded teams (New Jersey and Boston) in the first two rounds).

Malkin has 19 points in 13 games, but his performance has the curious look of the underperformer through the first two rounds, perhaps not befitting a Hart Trophy finalist. He came on late in the second round, going 1-6-7 in the last three games against the Caps, including the game-winner in Game 5. He was 2-3-5 in four games against the Hurricanes this year. He’ll need to be at least as productive.

Here is what we said at the top of round two…

"On February 17th, the Hurricanes lost a 5-1 decision to Boston in an especially ugly fashion. Playing at home, they scored first, then watched as the Bruins stormed back for five unanswered goals, three of them in the third period, all of them in the last four minutes of play. Since then, the Hurricanes went 17-5-2 to close the regular season, then they vanquished the New Jersey Devils in the opening round with a pair of lightning bolts in the last 90 seconds of Game 7 against Martin Brodeur in Newark. They have played like and have had the look of a team of destiny the last two months."

Add to this the fact that they defeated the presumptive Vezina Trophy winner in round two – Tim Thomas. Think they’ll fear Marc-Andre Fleury? Yeah, me neither.

Pittsburgh was actually a hotter team after February 17th than the Hurricanes (18-3-3 to finish the regular season). This will be a step up in class in opposition for the Hurricanes, as one expects at this time of year. What might work more insidiously against the Hurricanes here is that they are, (a) the second oldest team in average age among the final eight in the playoffs, and (b) they are coming off two seven-games series, both of which involved winning a Game 7 on the road.

Brind’Amour was off to the worst season of his career through February 17th. He was 8-21-29, -30 in 56 games, and you’d have to be forgiven if you thought that at age 38 the end was in sight. But he was 8-14-22. +7 in his last 24 regular season games. He had a similar slow start in the playoffs, going scoreless in his first ten games. He did have points in two of his last four games, but his importance in this series is going to be to a large extent his defense. If he can be effective against either Crosby or Malkin, perhaps Pittsburgh won’t have enough underneath support to advance. Hurricane fans hope that puck to the face in overtime of Game 7 against the Bruins won't ruin his movie star good looks... or keep him out of the lineup.

These were the best two teams in the East down the stretch in the regular season. Both have struggled in the playoffs to get this far – one team needing 14 games, the other 13. Pittsburgh might be expected to suffer a bit of a let down after “the circus” that was the Washington series. But then again, they’ve been this far before. And, as we said, Sidney Crosby is on a mission.

On the other hand, Carolina has been this far before, too. They are not that far removed from having won a Cup. And, goalie Cam Ward has not yet lost a playoff series in his career. He might not have the star wattage of a Martin Brodeur or the quirky appeal in style of a Tim Thomas, but all he’s done is stop pucks… and he’s still playing, unlike the other two.

In the end, we’re left with a simple credo… “go with the best player.” That’s Crosby.

Pittsburgh in 7
Posted by The Peerless at 9:29 AM 1 comment: