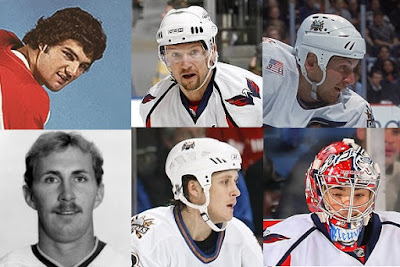 The All-Alphabet Team turns its attention to “All-Team N.”  Back in 2014, when we published this team, the roster looked like this:

It would seem that this group of skaters would be particular susceptible to replacements from among the post-2014 Capitals skating roster.  Unfortunately, the crop from which such replacements might be harvested is thin.  Only two skaters since the summer of 2014 have last names starting with the letter “N” – defensemen Aaron Ness and Matt Niskanen.

It would be hard to make a case for Ness to be installed on the roster.  His 18 games as a Capital match that of Nycholat on the blue line, but where Nycholat had two goals and eight points in those 18 games, Ness had three points, all assists.  There is also the matter of ice time, Nycholat averaging 20:32 per game in his 18 appearances, while Ness averaged only 12:35.

Matt Niskanen, on the other hand, is clearly a replacement for Nycholat.  Niskanen played in 390 regular season games for the Caps, going 29-127-156, plus-58, and averaged almost 23 minutes per game.  Those 390 games played rank 15th in team history among defensemen, while his goal total ranks 13th, and his point total ranks 14th.  To those totals he added another 70 postseason games for Washington (sixth among defensemen in Caps history), going 2-20-22 (tied for 14th in goals, eighth in points), plus-7, and averaging almost 25 minutes per game.

In goal, Michal Neuvirth was the pick in 2014.  He was then, and he remains a top-ten goalie in many statistical categories in team history: games played (134/ninth), wins (59/ninth), goals against average (2.67/seventh among goalies with at least 25 games with the Caps), save percentage (.910/sixth in that same group), and shutouts (seven/tied for sixth).  It would have to be a goalie with a significant record since 2014 to replace Neuvirth on this roster.

If there were only one who might be eligible.  It is another case of there being no suitable replacements, none whose last names starts with the letter “N.”  Neuvirth remains as the goaltender of choice for this squad.

What we are left with in the re-worked All-Team N is a team that resembles, in some respects, an expansion team, at least insofar as their experience with the Caps suggests.  Not much in terms of tenure, lack of top-end skill, a team that might depend more on guile and effort than anything else.  Neuvirth might have seen a lot of rubber backstopping this team.