The Peerless Prognosticator is ON THE AIR!!! -- Game 23: Canadiens at Capitals, November 22nd

The Washington Capitals, no doubt eager to wash, scrub, bleach, or apply steel wool pads scrape to away the rotten taste of Wednesday’s 4-0 loss to Pittsburgh from their mouths, take to the ice on Friday once more to face the Montreal Canadiens at Verizon Center.

While the Capitals pretty much wasted a week’s worth of good will among its fans with the stinker against the Penguins, the Canadiens are lurching from pillar to post trying to find their footing in November.

After closing October with three wins in four games to go a season-high three games over .500, Montreal is only 3-4-2 in November, alternating wins and losses in their last five games after starting the month with four straight losses.

Here is how the clubs compare in their numbers through Wednesday's games... 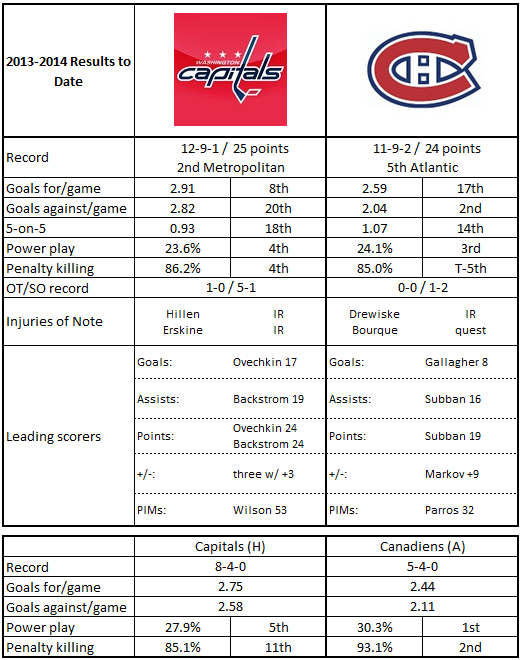 1.  While the Canadiens have had their issues about consistency, one position in which it has not been a problem is at goaltender.  Although Carey Price is just 2-2-0 in November, he has a 1.79 goals-against average and a .941 save percentage.  Peter Budaj has not been as impressive in his two appearances for the month, but he is 1-1-0, 2.40, .909.  Given that the Canadiens have not played since Tuesday, Price would appear the candidate to get this game.  Despite his sterling season numbers – eighth in GAA (2.05) and save percentage (.935) – he has had problems against the Caps.  In 15 career appearances against Washington he is 4-8-3, 3.09, .897.

2.  In alternating wins and losses over their last five games (3-1-1) the Canadiens have not lit up the scoreboard (13 goals), but they are likely pleased with the performance of Alex Galchenyuk.  The sophomore out of Milwaukee, Wisconsin (with stops in Belarus, Germany, Italy, and Russia in between – his father, Alexander, had a hockey career in North America and Europe), is the Habs’ leading goal scorer (three) and point getter (five) over those five games.  In three career games against the Caps he is 0-2-2, even.

3.  Only the Colorado Avalanche have allowed fewer goals in the first period (9) than have the Canadiens this season (10).

4.  One of the ways a team gets good goaltending performance but lousy win-loss results is to do poorly in one-goal games.  Montreal has done just that.  They have a worst-in-the-league 2-6-2 record in games decided by one goal.

5.  Only five teams in the NHL have yet to win a game when trailing at the end of the second period.  The Canadiens are one of them.  They are not 0-15-0 bad, like Buffalo, but 0-7-1 is not something they want to put on the banner of their web site.

3.  John Carlson has five goals in ten games this month. He has scored a goal in every other game his last six contests, which makes him a player to watch in this game, since he did not get a goal against Pittsburgh.

P.K. Subban gets the attention, and it is deserved.  He is a talented player who is exciting to watch.  But Andrei Markov seems to be the glue that holds the defense, especially the blue line, together.  He has the best 5-on-5 Corsi on ice to when he is off ice (source: extraskater.com).   His Corsi-for percentages are above 50 percent in 14 of the 22 games in which he has played, and they are above 60 percent in eight of them.  Markov does not seem to get much attention in the media, but if the Caps are not paying attention to him, they do so at their peril.  He is 1-18-19, plus-12 in 35 career games against the Caps.

There might be no better opponent against which Mike Green could return from injury than the Canadiens.  In 21 career games against Montreal he is 3-15-18, plus-8.  More important, though, Green has to avoid spending more time on the shelf with an injury.  Missing three games would not normally be cause for alarm, but this is part of a continuing pattern.  The Caps do not have the best of depth on the blue line when Green is healthy.  When he is out, too much of the burden devolves to Karl Alzner and John Carlson to chew up minutes.

1.  Score early.  It’s a good thing Montreal has only those ten goals allowed in the first period this season.  Only four teams have a worse winning percentage when allowing the first goal than Montreal, with their record of 2-7-2 in those situations.

2.  Volume.  Carey Price does not handle volume well, even with his superb overall record.  Eleven times this season Price has faced more than 30 shots on goal.  And, it’s frustrating, because he is certainly doing his part.  His record in those contests might be 4-5-2, but his goals-against average is 1.89, and his save percentage is .947.  The shots might, however, occupy the relatively anemic Canadiens’ offense and prevent them from mounting any pressure at the other end.  In those 11 games the Canadiens allowed only 20 goals, but scored only 24 themselves and were held to two or fewer seven times.

3.  Knock their top off.  If not for Max Pacioretty’s natural hat trick in the second period of Tuesday’s game against Minnesota, the Canadiens would have a truly meager offensive output over their last five games.  Take away the Pacioretty goals, and the Canadiens have ten goals in five games.  Of that total, four come from the pair of linemates Alex Galchenyuk and Brendan Gallagher.  Knock them off the score sheet, the Habs would not appear to have enough secondary scoring to make a game of this.

The loss to Pittsburgh leaves one with the question of whether the 4-0 loss was merely a bump in the road for the Caps (one that hurts more only for the opponent), or whether the Caps' string of success in November is the outlier.  Despite the sparse offense Montreal brings to this game, they are only a Caps shootout win behind them in the standings (25 to 24).  More to that point, Montreal has ten regulation and overtime wins to seven for the Caps.  The Canadiens could make this an unpleasantly low scoring affair for Washington, and that is where the success lies for the visitors.  After being shutout, one would hope the Caps bring the big boy pants (no, not the ones Carey Price wears) and make things unpleasant for the visitors.

Posted by The Peerless at 4:46 PM No comments: 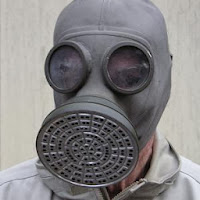 The Caps were late last night showing up for a game that started at 8:00!!  So, we’re even.

But here’s the thing. You can dissect, puree, julienne, or mince all the Corsi and Fenwick, in 5-on-5, 5-on-5 close, power play or penalty kill all you want.  It really comes down to this…

Braden Holtby has to find a way to slay this beast, because it is one he is likely to have to face again – and again – if the Caps are to be successful, either in this division or in the post season. And those numbers are now his career record against the Penguins.

Not that it is all on him.  Coming into this game, Holtby and his counterpart, Marc-Andre Fleury, had similar save percentages.  Holtby was at .925, Fleury at .921.  But while Fleury’s goal-against average was a smart-looking 2.00, Holtby’s was north of 2.60.  That is because Holtby was facing 35.0 shots per 60 minutes, Fleury only 25.4.

Well, there it was in living color on national television.  The Pens pummeled Holtby for 17 shots and two goals in the opening period to six shots on goal and none in the net for the Caps against Fleury.  The shots were 15-8, Pens, in the second period, with the only goal registered by Pittsburgh.  The visitors made it three-for-three in winning the shots battle with a 8-4 advantage in the third, plus another goal for good measure.

It was an equal-opportunity effort, or lack thereof, on the part of the Caps, who had 14 different skaters on the ice having good looks at Penguin goals.

And that means that the young Mr Holtby, who is 47-19-4, 2.37, .936, with eight career shutouts against teams other than Pittsburgh, is going to have to find a way to solve this team (with at least a little more help from his friends).  Because it is unlikely that the Caps will get to where they want to go without having to go through this team first.
Posted by The Peerless at 8:41 AM No comments: