No, not that Carlson, but we’ll get to that.

Today was graduation day of a sort as the Caps’ prospects wrapped up a fun filled week in Arlington, Virginia, with a spirited scrimmage that was the best of the three held this week. And they did so in front of the largest crowd of the week, most of which appeared to get the news that the opening faceoff would come at 10 am, not 10:30, as previously published by the club.

To probably no one’s surprise, Michael Dubuc opened the scoring in the first period for the Aardvarks. It was his sixth goal of the week, although one of the questions not of folks’ minds this week was “Can Dubuc find the net?”

One guy who did find the net in what had to be the highlight goal of the week was Eric Katellus for the Group B Banshees, who while being hauled down from behind, still managed to keep one hand on his stick and flip the puck over Braden Holtby’s pad to tie the game at a goal apiece.

It was that guy again, though – Dubuc – who would net his second of the game and seventh of the week to restore the one goal margin for the Group A Aardvarks. And then, late in the first period, the puck was shot in behind goalie Dan Dunn. The puck caromed hard off the end boards, and Everett Sheen was Johnny-on-the-spot to stuff the puck behind Dunn and give the Aardvarks a 3-1 lead at the first intermission.

In the second, the teams looked a bit ragged, with few scoring opportunities presenting themselves. However, Benjamin Casavant did get his blade on a puck to tap it in to cut the lead to one at the second intermission, 3-2.

In the third period, the competitive attitudes of the guys took over – not unexpected; it’s part of what got them here. The Banshees played some of their best hockey of the week among the scrimmages and pressed hard for the equalizer on Aardvark goalie Dustin Carlson (the subplot here being how Carlson would respond to the seven-goal period he endured in the third period of Scrimmage II). It was Andrew Glass for the Aardvarks, though, who would break through with a tally off a rebound late in the period to give the boys in Group A a 4-2 lead.

The Banshees weren’t done, though, and pulled out all the stops in the last minutes of the contest, maintaining possession in the offensive zone for almost the entire final two minutes and rifling shots at Carlson. The Banshees were unable to solve Carlson in those last two minutes, and the week ended with the 4-2 score in Scrimmage III.

Joe Finley had some moments when he looked indecisive or hesitant in his role as a winger, but that certainly isn’t surprising. He did lay a few monster checks on opponents, including one on Brett Flemming that knocked his microphone loose (Finley was apparently mic’ed for this contest). The remains of the equipment lay on the ice like some remnant of a Joe Louis Arena octopus until the next stoppage of play.

There are always going to be teams looking for little guys with skill who are unafraid to get their noses dirty in traffic and, more to the point, can survive in doing so. Mathieu Perreault is one of those kinds of guys. Clearly, he has skill. There were occasions today – and during the week for that matter – when it was clear he had the best stick-handling skills in this camp. The best passing skills, too. And he was not shy about pushing himself into scoring zones or in getting scruffy along the boards in his own end. But frankly, he’s expected to put on a bit of a show in this sort of environment. He would appear to have the skill to do it when the competition moves up a weight class or two, too. Does he have the staying power to do that? Guess we’ll see in September.

And what’s up with that little sumo hop Braden Holtby does before a faceoff in his end? Is he evicting the evil spirits from his crease?

Three Stars for the Week:

1. John Carlson – the most consistently good performer over the duration of the week
2. Michael Dubuc – cemented the perception that he has a knack for scoring, looked better in other aspects
3. Braden Holtby – solid all around all week, made some superb saves in Scrimmage III, impressive glove hand

If we had a "3A" star, it would go to Mathieu Perreault. He displayed his skill set on many occasions over the course of the week. We'd go so far as to say that he had the most impressive skill set of anyone at this camp (including Carlson). But on the other hand, one could argue that he should dominate in this setting. There is no quibbling with the fact, however, that he's got those skills that he'll need to get to the next level.

And here, one last time, are some pics from today’s action (including one of John Carlson taking a high stick in the chops)… 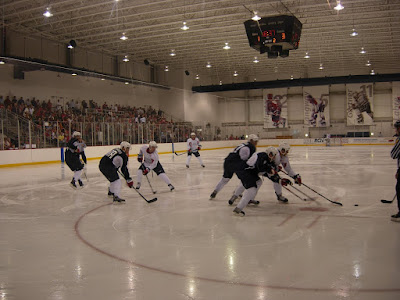 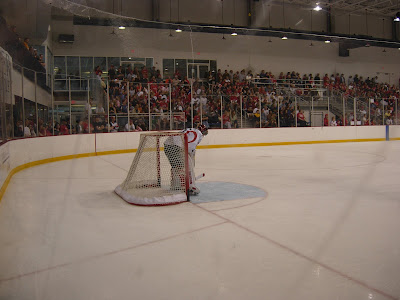 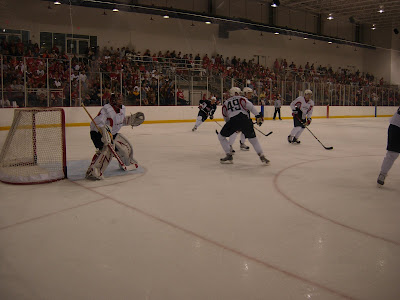 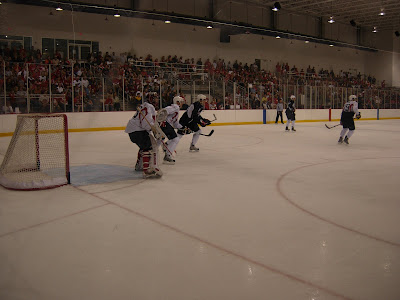 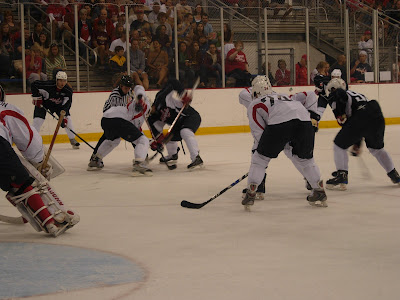 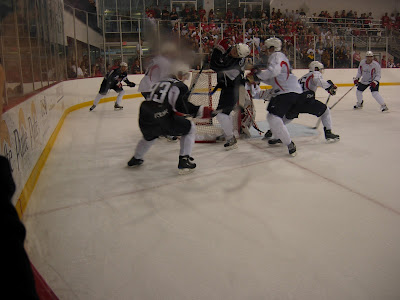 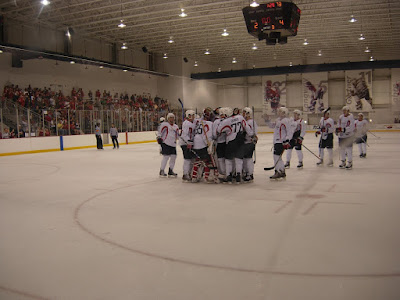 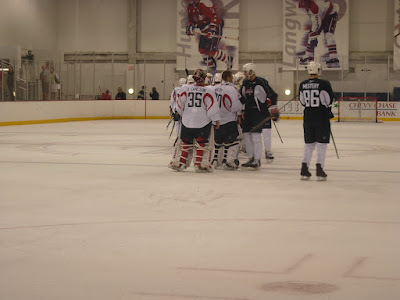 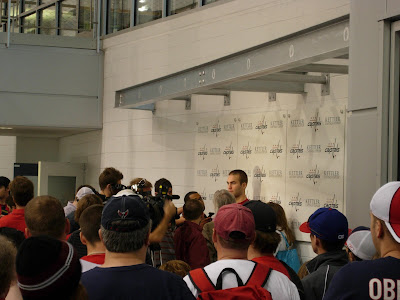 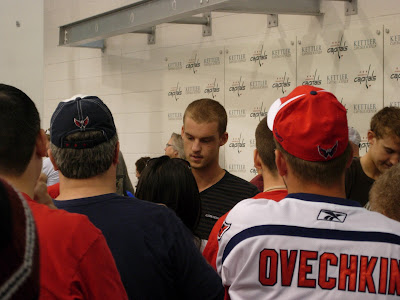 Posted by The Peerless at 2:09 PM No comments: