Boyd Gordon is not a scorer. So if your sense of player value rests on goals, assists, and points, then chances are you are not going to see a lot of value in a player such as Gordon. But even here, some perspective is in order. Of the twelve Caps forwards who played in at least 40 games with the club this season, Gordon was the only one to average less than one point (0.76) per 60 minutes of play at 5-on-5 (numbers from behindthenet.ca). He had fewer points for the season (nine) than a player who was traded away in December (Tomas Fleischmann, 10) and fewer than an occasional call-up who played in 25 fewer games (Mathieu Perreault, 14). In fact, nothing in his ten-game splits suggest anything extraordinary. He did not record more than two points in any ten-game stretch, and he was a “minus” player in five of them. Overall, his ten-game splits look like this:

At 5-on-5 Gordon averaged 2.18 goals against while on ice per 60 minutes of play. That was in the middle of the rankings for Caps forwards (40 games played, minimum). Doesn’t sound especially impressive. Except that in the same situations, the quality of competition faced by Gordon was surpassed by only one other Cap forward (Matt Bradley). On a team that switched gears in mid-season to focus more on defense, what Gordon could do at that end became more important, and his presence coincided with more Caps wins.  How he compared to the 2009-2010 season is as follows: 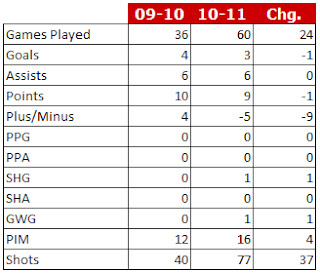 Then there were the other little things… Gordon led the team’s forwards in blocked shots per game (.833). He had the second fewest giveaways among forwards playing in at least 60 games. Only eight minor penalties all season (if you’re going to kill penalties, you don’t want perhaps your best defensive forward the one in the box).

Game to Remember… December 1, 2010. Gordon got the game winning goal in a 4-1 Capitals decision on an odd sort of play mid-way through the second period, when he backhanded the puck from below the goal line out in front, where goaltender Jaroslav Halak misplayed it into his own goal. He added a hit and a blocked shot, and he won 11 of 17 draws in the win.

Game to Forget… November 11, 2010. Gordon skated three shifts in a 6-3 Capitals win. He took a shot to the leg 20 seconds into his third shift and skated a total of 1:42. He would end up sitting out three of the next four games. Gordon doesn’t get a ton of ice time, but it was the only time in 61 games that he skated fewer than ten minutes.

Post Season… Given the role played by Gordon with the Caps, you might say he had a pretty good post season, all things considered. He was on the ice for only two goals among the 24 allowed by the Caps in nine games (only one at even strength). The flip side is that he contributed no offense in the nine post season games – no points, only 13 shots on goal, no shots on goal in any of the last three games of the four-game Tampa Bay sweep in the second round.

In the end, the Caps had a decision to make between Boyd Gordon and David Steckel. Which defensive “specialist” would the Caps retain? Gordon certainly had the more cap-friendly contract, to the extent that was a consideration at the trading deadline (a $300,000 lighter annualized cap hit). And, Gordon was arguably the better defensive player, anyway. Certainly he was a more effective penalty killer (almost a goal-per-60 minutes/on ice better than Steckel in 4-on-5 situations).

The question going forward as Gordon becomes an unrestricted free agent is whether the Caps can afford a fourth liner who is a very adept defensive player and penalty killer, but who contributes almost no offense and has had persistent durability issues (113 games missed over the past five seasons). Whether the little details that Gordon attends to can translate into a winning formula for the Caps will be the summer's question for this player. That is one of the little details the team must now consider.

(Photo: Jim McIsaac/Getty Images)
Posted by The Peerless at 6:38 AM No comments: