The Peerless Prognosticator is ON THE AIR!!! -- Caps vs. Flyers, March 12th

If it’s Thursday, it must be Philadelphia as the Caps finish up their abbreviated two-game road trip with a visit to Broad Street to take on the Bullies. And as if the Flyers aren’t an ornery bunch at home under normal circumstances, they will be trying to earn Coach John Stevens his 100th win as an NHL coach. Not bad for a guy who was almost left for dead behind the Flyer bench two years ago. And the Flyers might be in an especially motivated mood to inflict some punishment on the Caps, seeing as how Donald Brashear injured a knee in a fight against Wade Belak in the Caps’ 2-1 win over Nashville on Tuesday, and Matt Bradley – who has a surprising nine fights this year – took one for the team in getting bloodied by Jordin Tootoo in the same game. It might put the Flyers and their fans in mind of…

Fine…so, you think the Flyers might be looking to take a page out of your playbook and wreak some havoc tonight?

“Hell yeah…I can just see Scott Hartnell turning to the Caps bench in the third period and shouting, just like William Frizzell did against the ‘Skins back in ’90…’you guys want any more body bags?'”

That was quite a night, the “Body Bag Game”…six Redskins injured, finished the game with a rookie running back taking snaps. You remember Brian Mitchell?

“Shoulda been on our team…he was made to be an Eagle.”

Well, ‘Skins fans are just as happy he stayed around DC. But back to hockey… you realize the NHL is mocked in some quarters as the “No Hitting League,” don’t you?

“Bunch o’ pansies…gimme 20 guys and an attitude, I don’t even care if they can skate…I’ll win.”

“Just like that 1990 Eagles team. We just went out there and took what we wanted.”

Well, sometimes, that kind of thing doesn’t work, you know?

“Really?...What, are you another Capitals panty-waist that curls up when he gets hit?”

Remember what happened after that?

Yeah, the Redskins won the rematch in the playoffs and then won the Super Bowl, and then you…

It’s another Washington versus Philadelphia contest, and lately the results have tilted toward the north end of I-95. Since NHL training camp started last September…

Leave it to the Redskins to go 2-0 against the Eagles to salvage some Potomac Pride.

The Capitals will get their turn this evening at Wachovia Center in what is always an entertaining matchup…just not always successful. The Caps have, though, won two of the last three regular season meetings in South Philly. The one they didn’t is one they certainly don’t wish to have repeated – a 7-1 obliteration in December.

The Flyers probably pose the most complete set of problems for the Caps to face among any of the playoff-eligible teams in the East. The numbers suggest a pair of teams with very similar production… 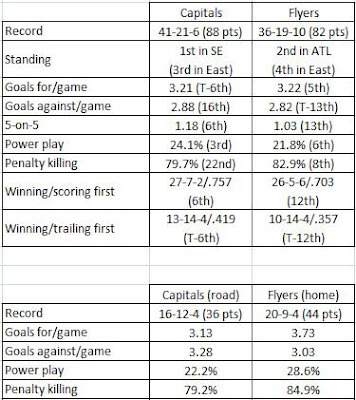 But while the Caps do it with style, the Flyers do it with abrasion. They have enough sandpaper on their roster to stock a Home Depot. And it comes packaged with skill.

Mike Richards doesn’t rank high on the list of penalty minute leaders in the NHL, but that is a product of his taking so few minor penalties. He has a total of 13 minor penalties this year. But he will drop the gloves. Perhaps unusual for one so well compensated for his production within the rules ($5.75 million/year), he has four fights this year. Oddly, perhaps, he seems to save that sort of thing for western settings. Three of them came at Western Conference venues.

Within the rules, though, Richards is a force to be reckoned with…

Scott Hartnell is turning into one of those guys you love to hate. A universal desire to shear him bald aside, Hartnell has that knack some guys have for getting under everyone’s skin. And, he likes to put on a show for the home folks. Four of his five fights this year have been for the benefit of the cheesesteakers.

The new guy on the block is Daniel Carcillo, and he should fit right in with this bunch. He doesn’t have nearly the skill level of Hartnell, let alone Richards, but he has perhaps no peer in the NHL – Sean Avery included – as an agitator. His 195 penalty minutes leads the Flyers (he already has 21 in three games with the Flyers), and he’s had a whopping 19 fights so far this year in 57 games played. The only thing, it would seem, that would prevent his adding to that total tonight will be in finding a dance partner. He will be something of a known commodity to some of the Caps, though, as he had many battles with the Hershey Bears while a member of the Wilkes-Barre/Scranton Penguins.

The Flyers’ defense is not spectacular, but certainly adequate for the task. Kimmo Timonen is the object of interest here as he will be matched at every opportunity against Alex Ovechkin. It is a head-scratcher as to how he manages to frustrate Ovechkin as much as he does, since Timonen gives away three inches and 30 pounds in size to the Caps’ forward. But Timonen manages just fine at the defensive end, and he contributes offensively as well…

In goal, one would think Antero Niittymaki would get the start, having authored a pair of wins against the Caps this year. But he’ll be sitting in favor of Martin Biron, who coach John Stevens described as follows: "Marty looks confident in net. He's square, he's challenging [shooters], he's keeping things in front of him. I think the overall level of his play is very good." We’ll see. Biron has a decent record this year, and against the Caps:

Briere is scheduled to return tonight after reinjuring his groin last week against Calgary. Ol’ Spearpucker has dressed for only 12 games this year, only three in 2009. He has not faced the Caps this season but has 19 points in 21 career regular season games against Washington. As a Flyer, Briere is 2-1-3, -3 in four games (all last season), but he is 6-5-11, +2 in seven playoff games against Washington while wearing the orange and black. If someone can get to his locker and post a calendar that says it’s April, Briere could be a problem for the Caps tonight.

Here is the odd number for Backstrom – six. As in, Backstrom has scored a goal in six of his last seven games against the Flyers, including playoffs. Not exactly what you’d expect from the set-up guy. After enduring a four-game streak without a point from January 17-27, Backstrom has points in 16 of his last 19 games (13 of his last 14). Another odd number – even. Backstrom has been even in his plus-minus in nine of his last ten game (a minus-2 against Carolina being the only interruption). A goal, an assist, and a plus number would be nice.

Philadelphia is one of the more intimidating venues in the league, and that might be just the thing for the Caps to focus their attention on getting back on the winning-in-regulation track. The Flyers are within sight of New Jersey for the Atlantic Division lead – seven points behind the Devils with a game in hand. If they were to overtake the Devils, it could spell a second-place finish for the Flyers and a home-ice advantage in a potential second round match-up with the Caps. It’s just a little more spice to add to the mix…

Posted by The Peerless at 7:06 AM No comments: