The Peerless Prognosticator is ON THE AIR!!! -- Game 58: Capitals at Penguins, February 17th

The Washington Capitals wrap up their season-long four-game road trip with a stop-over in Pittsburgh on Tuesday night to take on the Penguins at Consol Energy Center in the third of four meetings between the clubs this season.

The Caps will look to take the season series against the Penguins outright for the first time since going 3-0-1 in 2010-2011 (the Caps went 2-1-1 – two wins, two losses) in 2011-2012).  Both teams come into this game on, if not a roll, then certainly some solid results in recent games to cement their respective positions in the standings in the Metropolitan Division.

Washington is 5-3-1 since they faced the Penguins on January 28th, a 4-0 shutout for the Caps.  That record includes a 4-1-0 record against the three California teams, usually a bumpy road to travel through in the course of a season.

The Caps outscored their opponents, 23-21, over those nine games since beating Pittsburgh, but their performances have had an uneven quality to them.  Of their five wins, three of them came when scoring four or more goals, but they also were held to one or fewer goals three times (all losses).  Five of the nine games were decided by one goal, the Caps going 3-1-1 in those games.

Special teams were not overly special in those nine games, the Caps managing five power play goals in 28 chances (17.9 percent), while killing 18 of 22 shorthanded situations (81.8 percent).  The ability to dominate chances on special teams, mostly by denying opponents power play opportunities (three times facing only a single opposition power play) was the key in going plus-1 in special teams goal differential.

The Penguins are 5-2-1 since dropping that 4-0 decision to the Caps almost three weeks ago.  They have done it with defense and goaltending, because their offense has evaporated.  In eight games the Pens have 17 goals, four of them by Sidney Crosby, three more by David Perron.  In 18 games since being traded to Pittsburgh from Edmonton for Rob Klinkhammer and a 2015 first round draft pick, Perron has almost doubled his goal output (nine) from what he had in Edmonton in 38 games (five)  On the other hand, he has been on ice for 16 goals against in those 18 games with the Penguins, by far the most goals against per game of any forward having appeared in at least ten games (0.89/game).

Crosby has been a curiosity of late.  He is 4-3-7 in eight games since being held without a point against the Caps, part of a longer 18-game stretch in which he is 8-12-20.  The odd part about those 20 points is that is seems he scores in bunches or not at all.  He has four games in that span in which he recorded three or more points (4-9-13), but in the other 14 games he has just seven points (4-3-7).  He comes into this game with two points in his last four games, the noteworthy part of that being that he does not have an assist in those four games, his third four-game streak without an assist over his last 22 games. 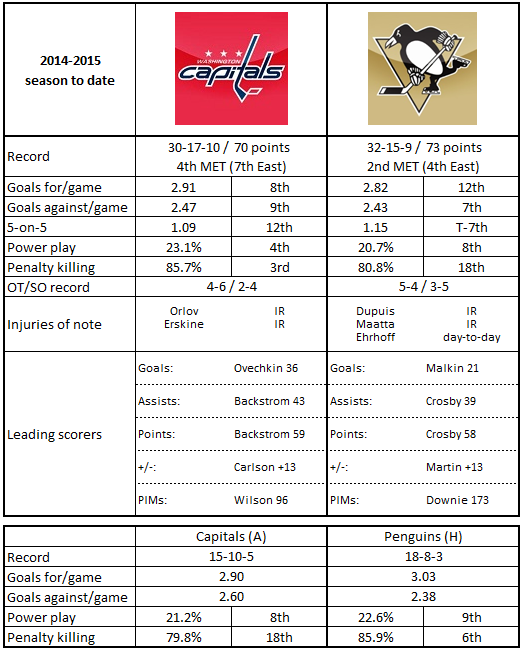 1.  Pittsburgh has the second best home record in the Metropolitan Division (18-8-3), but the Penguins are only 3-3-2 in their last eight games on home ice.

2.  Only one team in the league has faced more shorthanded opportunities at home than the Penguins (99 times in 29 home games).  Winnipeg has been shorthanded at home 115 times in 28 home games.

3.  Taking a lead into the first intermission is no guarantee of a win for the Penguins, at least by the standards of the NHL.  Only two teams – Edmonton (8) and Winnipeg  (9) – have lost more games when leading after 20 minutes than Pittsburgh (7).  The flip side of that is that no team has played in more games leading at the first intermission (27), and no team has more wins (20).

4.  Pittsburgh has 15 players with ten or more points scored this season.  Of that number, the Penguins drafted only five of them: Sidney Crosby, Evgeny Malkin, Kris Letang, Simon Despres, and Beau Bennett.  Only Letang was drafted after the first round (third/62nd overall in 2005).

1.  Comparing the drafted proportion of scorers to that of the Penguins, the Caps have 17 skaters with ten points or more so far this season.  Of that number, 10 were drafted by the Caps and one (Jay Beagle) was signed as a free agent from their AHL farm club.

2.  Going into Monday’s games only three teams in the NHL have played more games holding opponents to two or fewer goals than the Caps (29): Nashville, Montreal, and Chicago, all with 34 games.  Washington is 24-2-3 in those 29 games.

3.  Only Tampa Bay (five) has more players with ten or more multi-point games this season than the Caps (four).  For the Caps the players are: Nicklas Backstrom (19/tied for first in the league), Alex Ovechkin (19/tied for first), Mike Green (11), and John Carlson (10).

4.  When the Caps beat Anaheim on Sunday it was the first time that they beat a team when being out-shot (33-28 by the Ducks) since they beat the Detroit Red Wings, 3-1 (while being outshot, 27-17) back on January 10th.  The Caps were 0-4-1 in games they were outshot after the Detroit win until Sunday.

When Blake Comeau was drafted by the New York Islanders in the second round of the 2004 entry draft, he did not give much indication that he would be a top-end goal scorer.  However, after his draft year he posted consecutive 20-plus goal seasons for the Kelowna Rockets in the Western Hockey League.   After parts of three seasons with the Islanders in which he recorded just 15 goals in 107 games, he posted 17 goals in 61 games in 2009-2010.  Comeau followed that up with a 24-goal season in 77 games in 2010-2011.  Then the goals dried up.  He had none in 16 games of the 2011-2012 season, no points for that matter.  He was waived and claimed by the Calgary Flames.

It was part of a journey that would have Comeau play in three cities – New York, Calgary, and Columbus – in which he would score just 16 goals in 177 games over three seasons after his two 20-plus goal years.  In July 2014 he was signed as an unrestricted free agent by the Pittsburgh Penguins.  He started well, scoring 11 goals in 31 games before suffering a broken wrist on December 22nd against Florida in his 32nd game.  He missed 20 games before returning to the lineup on February 11th and scoring a goal against the Detroit Red Wings in a 4-1 Pens win.  With 12 goals in 35 games his goals per game (0.34) is clustered with those of Sidney Crosby (0.37) and Patric Hornqvist (0.35).  In 15 career games against the Caps he has one assist.

When Marcus Johansson took a long feed from Matt Niskanen and darted into the Anaheim Ducks’ zone early in the second period of Sunday’s 5-3 win over the Ducks, he had Joel Ward on his left wing on what was almost a two-on-none break.  One might have imagined that in a year gone by, Johansson would have backhanded a pass to his teammate to take the shot.  On this occasion, Johansson snapped a shot past goalie John Gibson’s blocker to give the Caps a 3-2 lead.  It was Johansson’s 14th goal in 57 games this season, tying his career best 14 goals in 80 games in his sophomore season in 2011-2012.

One would think that the Penguins will be particularly motivated for this game, what with not having scored a goal against the Caps so far this season.  On the other hand, the recent history of these teams seems to be alternating streaks.  Starting with the series since the 2005-2006 lockout, the Penguins were 9-1-0 over the first ten games of the series through December 2007.  Then the Caps went 13-2-2 until January 2012.  The Penguins then won eight in a row through last season.  Now the Caps have two straight shutout wins.  The pendulum seems to have swung back in the Caps’ favor.

Capitals 4 – Penguins 3
Posted by The Peerless at 5:29 PM No comments: