The Peerless Prognosticator is ON THE AIR!!! -- Game 57: Capitals at Wild, February 15th

The Washington Capitals did not find Manitoba to their liking, dropping a 4-3 overtime decision to the Winnipeg Jets on Tuesday night.  They hope to find Minnesota a more hospitable destination when they face the Wild at Xcel Energy Center on Thursday evening.

The Caps won five in a row to close the 2017 portion of their season and open the new year, but since that streak they have stumbled and let an opportunity pass to put some distance between themselves and the rest of the pack in the Metropolitan Division.  They are 5-4-4 in their last 13 games, but despite that record have lost just one point of their lead in the division, although it is now the streaking Pittsburgh Penguins (7-2-1 in their last ten games) that now occupy that spot and not the Columbus Blue Jackets, who occupied it when the Caps slide began.

For the Wild, their trying to get traction has the appearance of one of those video clips in a snowstorm when a car goes sideways and slides into a snow bank.  They have not won more than two games in a row in two months, since winning four straight (three of them in extra time) in Game 28-31 from December 8th through December 14th.  They have still managed to chug along with a 14-8-3 record since that streak ended.  The Wild will get a chance to earn that first three-game winning streak in more than two months when they host the Caps.

In the 25 games since that December four-game winning streak ended, the Wild have averaged just over three goals per game (3.04).  Eric Staal, a name familiar to most Caps fans from his days with the Carolina Hurricanes, leads the team over that span with 13 goals, a large chunk of his team-leading 25 goals for the season.  Staal is approaching a personal milestone.  With his goal in the Wild’s 3-2 win over the New York Rangers on Tuesday, he closed to within three points of 900 for his career.  He is currently tied at 897 career points with Pittsburgh’s Evgeni Malkin, so the race is on to see which will become the 109th and 110th players in NHL history to reach 900 career points.  No team has faced Eric Staal more often than the Capitals.  No team has allowed more points on Staal’s ledger than the Caps.  In 75 career games against Washington, Staal is 29-44-73, plus-4.  When he takes the ice on Thursday, he will tie Pat Verbeek for 16th all-time in games played against the Caps.  If he gets three points, he will tie Paul Coffey for 12th place in all-time points against Washington.

Matt Dumba leads the defense in goals scored over this 25-game stretch with seven, a total that propelled him into the team lead among defensemen in goals scored overall (10).  This is the third straight season in which Dumba hit the double-digit mark in goals. And if you think that is a trivial accomplishment, consider that at the moment he and Florida’s Aaron Ekblad are the only defensemen to hit double digits in goals in each of the last three seasons.  Home is where Dumba has found the back of the net most often, scoring seven of his ten goals at Xcel Energy Center and recording both of his two-goal games on that ice sheet.  And in your “Odd Dumba Fact” for this game, all of his seven multi-point games this season were recorded on home ice.  He is 1-1-2, plus-2, in seven career games against the Caps. 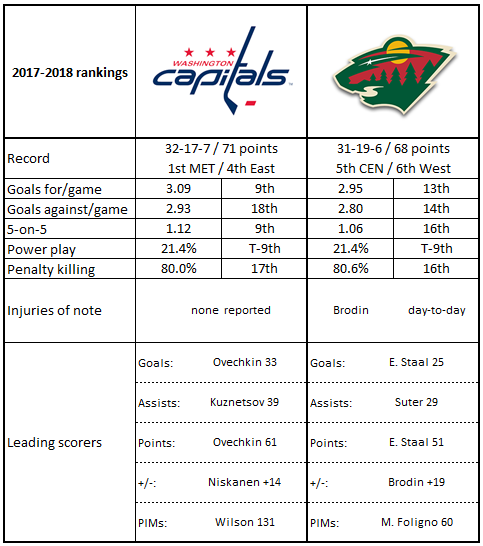 1.  Getting to 30 shots might be an effort for both teams.  This game matches the worst team in shots on goal per game (Washington: 28.6) with the fourth-worst in the Wild (29.8).  It is a match between the team with the fewest games with 30 or more goals this season (Washington: 20) and the team with the third-fewest (Minnesota: 26, tied with Los Angeles and Colorado).

2.  The Wild have the second-best home penalty kill in the league at 87.8 percent.  Only Colorado is better killing penalties on home ice (91.9 percent).  The Wild get a lot of practice, too.  They have the seventh-highest number of shorthanded situations faced on home ice this season (90).   On the other hand, Minnesota does not get a high number of power plays of their own on home ice.  Their 86 opportunities at Xcel Energy Center is sixth-fewest in the league.

3.  The first period could tell the tale here.  There are four teams in the NHL that have not lost a game in regulation when leading after one period this season.  Half of them play in this game.  The Caps are 19-0-1 in such games, while the Wild are 18-0-2.

4.  Minnesota can wilt late.  No team has allowed more third period goals this season than the Wild (72, almost twice as many as they allow in the first period (38)).

3.  One thing that the Caps have been able to do in this 5-4-4 stretch is manage their special teams opportunities fairly well.  They have 42 power play chances in those 13 games and only 38 shorthanded situations faced.

4.  One thing that the Caps have not been able to do well is the object of the exercise – win.  Since January 10th, the Caps’ five wins in the Metropolitan Division are fewer than any division team except Columbus (four).

5.  The Caps have been decent down the middle in scoring in this 13-game slump.  Evgeny Kuznetsov (14 points), Lars Eller (10), Nicklas Backstrom (7), and Jay Beagle (7) rank in the top six in points on the club over this span of games.  But Backstrom…minus-11?  Woof.

Six skaters for the Minnesota Wild have appeared in all 56 games for the club this season.  One of them is former Capital forward Daniel Winnik.  Not bad for a player who went all of last summer as an unrestricted free agent, joining the Wild on a professional tryout contract for training camp and then signed to a one-year contract on the eve of the regular season.  Winnik is among the more travelled players in the NHL, the Wild being his eighth team in 11 NHL seasons.  But travel aside, Winnik occupies a special role in his draft class.  He was taken in the seventh round, the 265th pick of that draft.  But only five players taken in that draft have appeared in more games than Winnik (773): Alex Ovechkin (973; taken first overall), Andrew Ladd (896 games/fourth overall pick), Travis Zajac (818/20th), Mark Streit (786/262nd), and Mike Green (776/29th).  It is worth noting that four of the five players ahead of him were first round picks.  For good measure, the three players just behind Winnik in games played in that draft class are also first rounders (Drew Stafford (13th overall), Evgeni Malkin (2nd), and Blake Wheeler (5th).

Winnik is not scoring at the pace he did with the Caps last season – five goals in 56 games so far versus 12 in 72 games last season – but then again, last season was a career year for Winnik in shooting percentage (14.6) and, as a result, goals scored, even though he had a career low in ice time per game (12:55).  You would think that even with the low goal total, Winnik would have punished old teams, but only one of his five goals to date has come against a former team (Pittsburgh).  As for his most recent former team, Winnik is 2-1-3, plus-6, in nine career games against Washington.

More shots and less efficiency (lower save percentage) has resulted in his goals against average ballooning from 2.07 last season to 2.82 going into this game.  But if he was to match last year’s goals against average with the number of shots he has faced this season he would have to have a save percentage of .936.  Only one goaie among 44 with more than 1000 minutes played this season has a better save percentage, the St. Louis Blues Carter Hutton (.940 in 1293 minutes), but he is facing an average of just 30.3 shots per 60 minutes.  Holtby is 8-2-0, 2.29, .922, with one shutout in ten career appearances against the Wild.

For the longest time, well, since the Wild were established in Minnesota in 2000, the Caps could not win in the Twin Cities (they weren't so great against the North Stars in Minnesota, either, before they moved to Dallas, going 10-13 with eight ties).  In their first seven games in Minnesota against the Wild, the Caps went 0-6-1.  However, Washington has wins in each of their last two visits to Minnesota, a 3-2 win in March 2015 and a 5-4 overtime win last March on a goal by T.J. Oshie, who played high school hockey in Minnesota.  That overtime win last year featured a hat trick by Alex Ovechkin (all three goals on power plays), and the March 2015 win had two Ovechkin goals.  Caps fans would like to see both players renew their pleasant familiarity with those surroundings, to win and to take some pressure of their beleaguered goaltenders.