The Peerless Prognosticator is ON THE AIR!!! -- Game 79: Canadiens at Capitals, March 31st

The Washington Capitals live to skate another game with meaning. Tonight, it will be the Montreal Canadiens who come into Verizon Center to try and dash the hopes of the men in red and their fans. For the Canadiens it is a chance to…

You spring for the French version of Rosetta Stone there, Cheerless?


“I just thought since these are the Canadiens and all, that I had to speak ‘en Frenchy,’ as they say.”
I admire a fellow looking to expand his horizons.


“I’ve even started taking classes in, uh… how you say… French cuisine.”
Do tell. What is your specialty?

The Caps and the Habs wrap up their season series tonight, and the Caps have a chance to sweep the season series. The Caps captured the first three games of this year’s season series, two of them by 3-0 scores and the third by a 4-1 margin. It is part of a long, hard season of pain and intrigue for the Canadiens, a team that could, if they fail to win another game, finish with fewer than 30 wins in a full season for only the second time in 49 years (and back in 1962-63, when they had 28 wins, the league played a 70-game season, not the 82-games season it plays now).

Mediocrity might be a step up for Montreal, and that would be a pretty good description of their play. In their last dozen games going into last night's action they had a record of 4-4-4 (going into Friday’s game against the Rangers). They have been outscored, 31-29 over that span. They have had a decent power play (18.9 percent on 7-for-27) and a respectably penalty kill (37-for-44, 84.1 percent). They have found just enough ways to lose. Of the eight losses, five were by one goal, four of them in extra time. Another was a two-goal loss in which the opponent scored a power play goal in the last minute of the game.

And it has not worn well in Montreal. The Canadiens relieved general manager Pierre Gauthier of his duties on Thursday, and Bob Gainey – Gauthier’s predecessor in the GM position – left his role as team advisor. It did not sit well with Canadiens forward Erik Cole, who sounded as if he might have been a Caps player talking about that team…

“…it just goes to show how poorly we’ve underperformed (performed) this year as a group. Maybe in some other organizations a season like this can be written off or tolerated, but I feel that with the winning tradition and culture here, it’s just unacceptable. And it’s on us as players. We’ve cost several persons their positions in this organization this year, and that’s something that we should all be ashamed of and (should force us to) look in the mirror. It’s up to us to get better and be better as a group.”

Seems as though there are other places in which a team’s play is characterized as “unacceptable.”  Here is how the teams compared before last night's games... 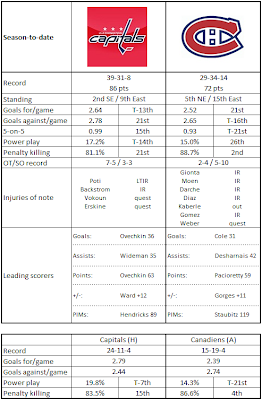 1. Montreal is another of those teams that does not seem to finish games well. They play teams relatively even for 20 minutes, being a plus-6 (goals for/goals against) in the first period of games this season. They are just about as good in the second – plus-3. But in the third period the Canadiens are a minus-20 with the seventh highest total of third period goals allowed (81 in 78 games).

2. Montreal can score in one situation. They lead the league in 5-on-3 goals scored (seven). They have allowed only one goal in 3-on-5 situations.

3. Part of Montreal’s problem in the third period is that they hang around, but don’t close the deal, then give up empty net goals. Only five teams have allowed more empty net goals than the Canadiens.

4. The Canadiens are not an especially disciplined team, and by that we do not mean that they drop the mitts much (tied for 20th in fighting majors). No, their problem is more mundane – only two teams have committed more minor penalties. Only Philadelphia has found themselves in more shorthanded situations. The results have been especially hard on Montreal on the road. They are a minus-33 (power plays for/power plays against) on the road, the third worst such mark in the league.

1. The Caps are not fast starters. Their 53 first period goals is the sixth-fewest number of such goals in the league. It has contributed to a minus-13 mark (goals for/goals against) in the first period of games. They are no better in the second period (minus-14), but the problem is at the other end of the ice. Their 80 goals allowed in the middle frame is the fourth-highest number of goals allowed.

3. The Caps play well with a lead in this respect. They have only one loss in regulation when leading after one period; they have no losses in regulation when leading after two periods. Again, the problem is frequency. In the first period of games they took only 25 leads into intermission while trailing 31 times. In the second period, 24 leads, 34 times they trailed.

4. The Caps didn’t get the memo on the Gimmick. Only two teams have participated in fewer trick shot competitions this season than Washington (seven, with a 3-4 record) – Tampa Bay and Carolina. Only Carolina has fewer wins (none). Maybe it is not a bad thing. The Caps have the third worst save percentage in the freestyle portion of the show (.522).

5. The Caps can lose ugly. Only two teams – Columbus and Tampa Bay – have suffered more losses by three or more goals. Seventeen of their 31 losses in regulation have come by that margin.

Max Pacioretty started the month of March as if he was shot out of a cannon. He was 5-7-12 in Montreal’s first seven games, his longest scoring streak of the season. Then... he has not recorded a goal in any of his last ten games and has just one point in his last seven contests. Montreal is 1-3-3 in those last seven games. Pacioretty does not have a point in three games against the Caps this season, and he is 0-3-3 in ten career games against Washington.

OK, kid… you have the keys to the car. With Tomas Vokoun having apparently reinjured his “lower body,” it is now Michal Neuvirth’s net. He was solid in relief in the Caps’ 3-2 Gimmick win over Boston on Thursday. He will need to be that, and more, over the last four games if it comes to that. Certainly he needs to be better than his record since shutting out Toronto on March 11th. In five appearances he is 2-1-1, 3.54, .881. Performance has not been his problem against Montreal. He is 2-0-0, 0.50, .984 with one shutout in two appearances against the Canadiens this season and 3-1-0, 1.81, .935 with one shutout in his career against Montreal.

1. Pressure. Fifteenth-place teams have nothing to play for but pride. And if a team gets out fast against such teams, there is only just so far pride will take that worn-down team. Watch the first ten minutes for who has the puck in whose end more.

2. More pressure. Carey Price seems to like a nice calm sea of ice. When in his rhythm, there are no acrobatics, no flailing, no demonstrations of displeasure. Get bodies in front of him, whack at his pads when the puck is in close. Maybe he’ll think about shooting the puck at a gaggle of Caps… 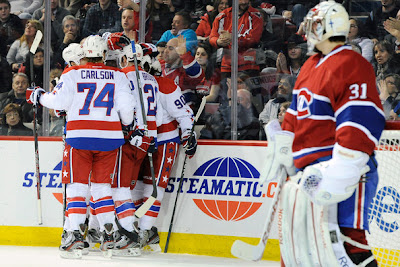 3. And still more pressure. The Caps have suffered a lack of power play opportunities. Only two teams have had fewer at home. Keep the heat on, force the Canadiens into mistakes and perhaps penalties. Only one team has been shorthanded more often than the Canadiens on the road. Make them add to that total.

In the end, two points is the only adequate outcome in this game with the Caps playing two of their last three on the road. They should not lack for motivation. It is Fan Appreciation Day with what should be a good crowd. The Caps can put space between themselves and the Buffalo Sabres, putting pressure on the Sabres to keep up. The can tie Ottawa in points for seventh place (Ottawa has a game in hand and is at Philadelphia tonight).  They can close to within two points of first in the Southeast Division with a game against Florida coming up next week. If they come out flat in this one, there really will not be much left to say about this team.