You have enjoyed a nice dinner.  You are looking forward to your last course.  It comes to your table.  It looks wonderful.  You take a forkful… and spit it out.  What had been a lovely dinner to that point leaves a bad taste in your mouth as you leave for the evening.

That was Week 7 for the Washington Capitals.  Oh, it was a winning week.  Two road wins made it a fine start to the week.  When the Caps came home to face the Buffalo Sabres, it looked as if the Caps might have their first blemish-free week of the season.  But the Caps came up short, and a 2-1-0 week did not seem as good as a 2-1-0 week should. 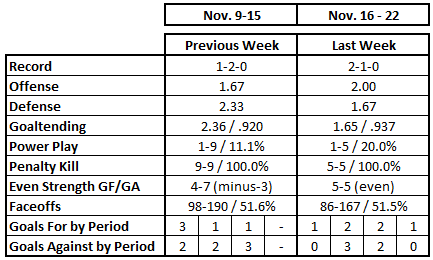 The Caps started the week with a pair of one-goal wins on the road, in Arizona and Colorado. Not only were they one-goal wins, the games scored the game-winners late, an overtime game-winner by Eric Fehr in a 2-1 win over the Coyotes and a game-winner by Alex Ovechkin with 5:56 to play in a 3-2 win over the Avalanche.  Those two games put the Caps over .500 in standings points for the season in one-goal games, certainly no small consideration in a league with as much parity as the NHL (for comparison’s sake, the Caps were 21-10-14 in one-goal games last season, 11 standings points over.500).  They dropped a one-goal decision to the Buffalo Sabres to end the week, though, and fell to 5-5-3 in one-goal games, the 24th-best record in the league. 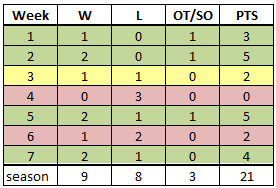 It was a hard fought week, and goals were hard to come by.  Six different Caps scored the six goals for the week; ten different Caps had points.  Nicklas Backstrom led the team in points with a goal and two assists; four other players had two points.  The Caps struggled in two areas.  One, shot volumes.  The 44 shots they recorded against the Sabres in the last game of Week 7 papered over the fact that they managed only a total of 47 shots in the first two games of the week against teams that ranked in the bottom third in the league in shots on goal allowed.  Then there was the shooting percentage.  The Caps were 6.6 percent for the week, well below their 9.0 percent for the season. If there was a hole in the offense this week it was in the second line of Marcus-Johansson, Andre Burakovsky, and Troy Brouwer.  The trio combined for no even-strength points in three games (Johansson had a power play assist), and they were a combined 0-for-21 shooting.

The Caps continue to do one thing well on a consistent basis – limit shots.  Washington allowed three opponents a total of 79 shots, an average of 26.3 per game, slightly less than their season average of 26.8 shots per game (fourth-best in the league).  However, the Caps seem to have difficulty separating effective defense from sluggish offense; the two seem to combine to result in something that resembles “Hunter Hockey,” coin-flip games where offense – for either team – is difficult to realize.  The Caps had a positive Corsi week, a 55.0 percent Corsi-for at 5-on-5.  However, this was skewed by an overwhelming Corsi advantage against the Sabres (67-39 in events, in favor of the Caps; 63.21 percent Corsi-for; numbers from war-on-ice.com).

Braden Holtby got the call in all three games in Week 7, and he shined.  He was over .930 in save percentage in each of the three games, extending a stretch of good play on his part.  Over his last six appearances he is 4-2-0, 1.67, .942.  Holtby did an especially good job of keeping the Caps in games early.  He stopped all 19 first period shots he saw for the week.  The flip side of that was that he allowed goals in each of the second period of games for the week (27-for-30 in saves overall). In the third period and overtime he was a solid 28-for-30 (.933 save percentage).  It might have been an even better week but for some odd events in the last game against Buffalo. He allowed one goal when a shot that sailed wide hit the end boards and took an odd rebound out the other side where Matt Moulson converted it into a score.  Then, on Buffalo’s second goal, Holtby made a fine save on the initial shot, but his defense did not tie up Torrey Mitchell before he could jump into the play and convert the rebound.  Still, Holtby is on a roll.

It was not the efficiency, it was the frequency.  The Caps had only five power play opportunities for the week, including a game in which they had none and another in which they had one (which they converted).  In three of the last four games for the Caps they have had one or no power play chances.  Despite the second best power play in the league, they finished the week with the third-fewest opportunities in the league (59), behind only the New York Rangers (56) and Boston Bruins (54).  Looking at the efficiency alone, a week in which the Caps were 20 percent in opportunities (rebounding nicely from their only week below 20 percent) and shot 1-for-9 in 8:00 of power play ice time was a pretty good one. 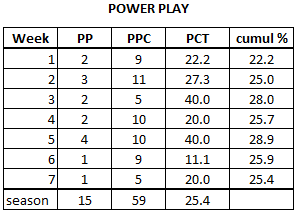 It was the second straight clean week for the Caps’ penalty killers.  And, what was good for the goose (only five power play opportunities) was good for the gander (only five shorthanded situations faced).  One would have liked the Caps to be more efficient on the penalty kill in one respect, though.  In 9:32 of shorthanded ice time for the week the Caps allowed 12 power play shots on goal.  If it is true that the goaltender needs to be a team’s best penalty killer, that might have been true of Braden Holtby this week.  The week was helped, no doubt, by the fact that Colorado and Buffalo are poor power play teams, both ranking in the bottom five in the league. 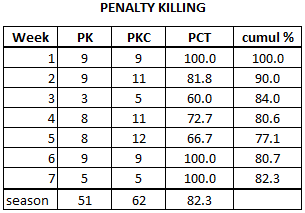 The even strength ratio for the week is more or less the product of the first two games.  Against Arizona and Colorado the Caps had a combined Corsi-for percentage at 5-on-5 of 49.4, the result of being a minus-2.  In that respect it was a very even week at even-strength.  Against the Sabres the underlying numbers looked marvelous – plus-28 Corsi at 5-on-5, but the Caps didn’t pass the “eye” test, an inability to follow up shots by creating havoc in front of goalie Jhonas Enroth.  When Buffalo got a couple of breaks, it resulted in a 2-0 win at even strength in the last game of the week.  Possession numbers can tell a story over large numbers of games, but on a game to game basis they can be subject to much more noise than signal.

It was a relatively even week in goals scored, six for and five against, but the distribution was a bit different.  The Caps spread their goal scoring across the periods, including one in overtime.  On the other hand, opponents squeezed all their goals into the second and third period.  That second period was the problem.  The Caps were a minus-1 for the week in the middle period (two for, three against).  This was a bit odd in that the Caps are among the most prolific goal scoring teams in the second period of games this season (they finished the week tied for eighth with 22 goals).

The two points that the Caps more or less gave away to Buffalo might be the two that haunt them in the end.  At the moment, those two points do not make a difference in their Metropolitan Division standing; they would have finished the week in third place with or without them.  But it is the difference between being eighth in the Eastern Conference (with the points) and ninth (without them).  It was an opportunity lost.  The good part was that the Caps earned that opportunity with two hard-fought road wins out west.  But to give a part of it back with a forgettable effort against Buffalo (44 shots on goal notwithstanding), makes one think than come April, that game might not be so forgettable after all.