Since we are in the midst of a lull in the NHL calendar – one that might last a while – let’s think a bit down the road.

“Ya mean to the general store, Cuz?...I could use a nice cold sarsaparilla.”

"Cousin, you’re barking up the wrong tree…he doesn’t get it."

“Which tree is the right one to bark up?”

Can we get back to the point?

“It’s just I always here about someone barking up the wrong tree, and I never hear about which tree he should be barking up…”

“And what’s up with the barking, anyway?”

As we were about to say, maybe we might take a look down – well, a few years from now. The Caps pride themselves on the draft being a big part of their plan. Out in about 2015…

“When the NHL comes back to play…” 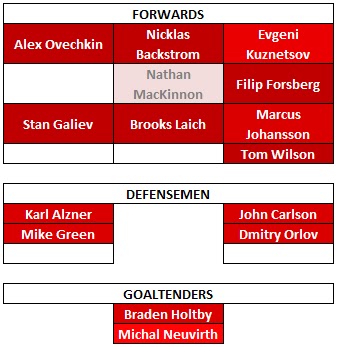 Yes, we know. But he’s under contract to the Caps in 2015, and he spent a fair amount of time in Hershey, so…

Ok, an honorary draft pick. You’ll note that the Caps can fill their lineup quite a bit with their own draft picks, and…

“What’s with the shading, cuz?”

Ah…glad you asked. Not all of these draft picks are committed to the Caps in 2015, and the shading is just our way of offering a likelihood that they will be “rocking the red,” so to speak, in 2015. Alex Ovechkin is a given, so he gets a darker shade of red. Same for Nicklas Backstrom. Marcus Johanssson is not under contract in 2015, but he’s young and has a likelihood of being here, just not the level of commitment of an Ovechkin or a Backstrom. Same for the four defensemen you see there.

Well Fearless, his is a bit less than Johansson owing to the choices he has created for himself. He would still be only 23 when the 2015-2016 season started, certainly young enough to develop in the NHL. But, there is the lingering question of whether he will be here at all.

What you probably see here is a roster heavy on skill, not so much in terms of grit. The Caps have acquired this characteristic by other means, such as trading for Troy Brouwer or Jason Chimera. It has not been something the Caps have drafted, or at least drafted with success. That is what makes “The Tom Wilson Experiment” intriguing. He has the reputation of being an ornery SOB, a talent the Caps have lacked as a playoff contender almost since Dale Hunter was playing.

What you can ask yourself is whether this lineup has the “skill” skill set to be a Stanley Cup contender. There will be players assumed to be in their prime (Ovechkin will be 30 years of age, Backstrom 27, Laich 32). And there will be youngsters coming up (Filip Forsberg will be 21, Stan Galiev 23, Tom Wilson 21). It is the kind of mix you would want, but there is the matter of those “white” blanks on the roster. It is there where the key might lie to taking those last steps to a championship…

“And you think the Caps are going to get him?”

Yeah…Bettman owes us one in the draft lottery.