Self versus Team -- Two Perspectives 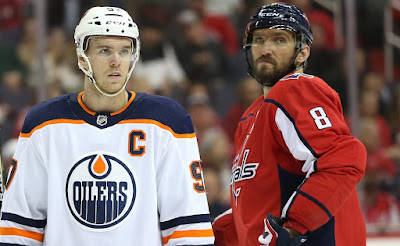 “For the past couple of years, anytime anyone has ever talked about Ovechkin, it has been within the context of goals, specifically how many he’ll end up scoring before the end of his career. It seems almost with every goal Ovechkin scores these days comes with it a detailed synopsis of which all-time great he’s hunting down in career goals. (Checks notes. Notices that Ovechkin needs two more goals to pass Marcel Dionne for fifth all-time and 11 to usurp Brett Hull for fourth.)

This has to stop, for the good of the Washington Capitals. If Ovechkin does come back the way everyone expects he will, it has to stop being about goals. You know why? Because for all of his brilliance, for all of his otherworldly and unparalleled scoring ability, Alex Ovechkin has one Stanley Cup in 16 seasons.  That’s why. In fact, when you look at his career in totality, the ledger of playoff flops and disappointments is far more populated than playoff triumphs.”

Well, well.  Now isn’t that a piece of fine writing?  And no, this isn’t some speculative piece written in the early 2010’s, when every pundit with a pen seemed to think Ovechkin was (a) all about goals, and (b) would be better off playing anywhere else but Washington, D.C.  This was written by The Hockey News’ Ken Campbell on Wednesday of this week, who has some advice for Caps’ fans added for free…

“If I’m a fan of the Washington Capitals, nothing would thrill me more than to see Ovechkin to come into training camp in the fall and say the following: ‘I could not possibly care less how many goals I score this season or for the rest of my career. If I score 18 goals this season and we win the Stanley Cup, that would be the greatest thing ever. I’m done chasing ghosts. If I catch them, that’s great. But it is no longer how I will define my career. If sitting out games during the regular season to save myself for the playoffs and/or taking a lesser role later in my career negatively affects my overall numbers, I’m just fine with that as long as we keep chasing Stanley Cups.’”

He doesn’t come out and call Ovechkin a selfish, goals-at-all-costs player, but you can see that label from where Campbell sits.  We thought that tired trope was retired years ago.  But Campbell decided to revive it by drawing a bright line from Ovechkin’s chase of a goal scoring record in the regular season to playoff disappointment.  No one is going to argue that the Caps have been disappointing in the postseason for much of Ovechkin’s career.  In 14 postseasons since 2008, when the Caps first qualified for the playoffs in Year 3 of Ovechkin’s career, the Caps participated 13 times and won more games (69 as of Tuesday) than all but three other franchises – Pittsburgh (99), Boston (88), and Chicago (80).  On the other hand, they were eliminated in the first round six times (including 2020, after the round-robin play-in) and were beaten in the second round six other times.  Only their Stanley Cup season of 2018 stands out for having advanced past the second round.

But is Ovechkin, and his pursuit of regular season records, a cause for playoff disappointment?  He is 71-64-135, plus-8, in 141 games for his career (every playoff game the Caps played in that period) – first in goals overall, fourth among wingers in assists, third in points, eighth in points per game (0.96) among 311 players participating in at least 50 postseason games.  He isn’t even slowing down all that much in recent years.  In three postseasons since the Caps won the Cup, he is 10-8-18 in 20 playoff games (0.90 points per game).  By way of comparison, the contemporary player with whom he is most compared – Sidney Crosby – is 3-3-6 in 13 postseason games over the same three-year span.

But his contemporary is not the relevant comparison here.  Ovechkin is a player painted as one in pursuit of regular season records at the expense (even if unintended) of postseason success, of putting self above team.  How is such a portrait reconciled with another otherworldly (an adjective Campbell uses to describe Ovechkin) talent?  One who has been in the league six seasons and has established himself as the best offensive talent, by miles, in the NHL?  In the regular season, that is.  In those six regular seasons, Connor McDavid has four 100-point seasons, including this past season in which he posted 105 points in just 56 games, a 154-point pace for 82 games, which would have been the most points for a full NHL season since Mario Lemieux recorded 161 points in 70 games in 1995-1996.

But in those six seasons, McDavid has been to the postseason three times, and his Edmonton Oilers have one playoff series win to show for it, that coming in his sophomore season in 2016-2017 (Ovechkin’s Capitals were in the postseason in four of his first six seasons with two series wins).  McDavid, who has averaged 1.41 points per game in 407 career regular season games, has 22 points in 21 career postseason games (1.05 per game, tenth among players dressing for at least 15 games).

Where is the sense of disappointment?  Edmonton has won eight postseason games in McDavid’s career (tied for 20th since he came into the league in 2015-2016), and they have a .381 winning percentage (22nd).  Where is the question about whether posing gaudy points numbers in the regular season isn’t coming at the expense of postseason success?  And for that matter, where is the underlying story that followed Ovechkin around that the player (and perhaps the team) would be so much better off in another city?  Such stories just aren’t there, or at the very least, the volume on any such story has been turned down.

Look, Campbell is hardly an outlier in this kind of commentary.  And he is certainly not unique in this kind of focus on Ovechkin, while McDavid seems to get a pass (mostly, it seems from the northern press, who as often as not read like “fans” and not “reporters” when it comes to McDavid, but that’s just what it appears to be from our perch) for his team’s postseason failures in his early career.  Both teams have had disappointments in the postseason, although it is Ovechkin’s Caps who have a Cup (albeit in his 13th season).  But for now, while Ovechkin is treated as a player in pursuit of goals instead of championships, McDavid is hailed for point totals and highlight reel end-to-end rushes, while his lack of postseason success is rarely, if ever mentioned, and when done so, usually in the context of weak teammate support or ineffective team management.

The failures of the Capitals and the Oilers cannot be laid at the feet of Ovechkin or McDavid.  Both are extraordinary talents in different ways, Ovechkin as the greatest goal scorer of his generation (or perhaps ever, when era-corrected stats are considered), McDavid as the most prolific point producer of his era and perhaps the most electrifying skater in decades.  Years from now, both will have their names featured prominently in the NHL record book.  We daresay that both will retire with Stanley Cups on their resumes. But the treatment these players have received in their careers, especially in their early careers, has been quite different, and that says far more about who is doing the writing than who is doing the playing.