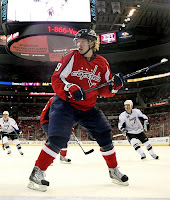 Well, it starts a lot earlier than we might have envisioned, let alone liked. But here we are to take a look back at the 2009-2010 season by “the tens.” We start with the centers…

Theme: “Improvement starts with ‘I’”

Sometimes, it is hard to fathom that Nicklas Backstrom just completed his third year in the NHL and that he is just 22 years old. His play this season was more like that of a 32-year old in many respects. But in this, his third season, he could lay claim to having improved his game to where he could be mentioned as being among the top five centers of the game. First on the list of improvements, his consistency, as reflected in his tens… 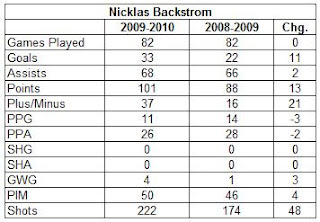 For the third consecutive year Backstrom played in all 82 games, and the hallmark of that effort was in not recording fewer than ten points in any ten-game stretch of the season. Even within this season-long run of consistency, though, Backstrom showed improvement. He started the season in a manner quite different than how he started the 2008-2009 season. In his sophomore campaign, he had but one point in his first six games and didn’t register his first goal until Game 15 of the season. This year, he came out blazing – eight assists in his first three games, four goals (and 18 assists) in his first 15 games.

The four goals would be a signal. After potting a pair in each of his first two ten-game segments, Backstrom would then record 22 goals over the next four ten-game segments. In those middle 40 games, Backstrom was 22-31-53, plus-31. The key there would be his goal-scoring. He would pass his previous career high (22), set the previous season, in the 55th game of the year, against Tampa Bay on January 31st.

What distinguished Backstrom’ season was how clutch a player he had become in just his third year. For example…

-- He seems to have had an especially surly attitude with respect to the two franchises in Pennsylvania, going 3-16-19, plus-13, in only eight games against the Flyers and Penguins.

And, he had a finishing kick – he did not go consecutive games without a point over his last 40 games (18-37-55, plus-23, and three of his four game-winning goals). In fact, beginning with his 1-4-5 performance against the Flyers on December 5th, he went lower than having recorded nine points in his previous ten games played only three times (covering 54 individual sets of ten game elements).

His durability is most obviously reflected in his having completed his third consecutive 82-games played season. But here is another reflection of that durability – Backstrom was 5-9-14, plus-7 in 13 games that constituted the back end of back-to-back games.

Backstrom also has shown improvement in the little things, one of them a bit surprising. First, his faceoff winning percentage, while not yet fearsome, has improved – 46.3 percent in his rookie year, 48.7 percent last year, and 49.9 percent this season. But the improvement is much more pronounced on the power play, improving from 46.5 percent in 2007-2008 to 50.3 percent last year, and then to 57.6 percent this season.

Backstrom, as part of developing two-way game, also improved his blocked shot totals. In 2007-2008 he blocked a total of 34 shots, improving to 46 last season. His total of 62 blocked shots this season represents an almost doubling of his blocked shots over his rookie season.

Then there is the matter of an emerging physical game. Backstrom is a far cry from the 34-hit center he was in his rookie year. The 90 hits he recorded this season does not put him among the league-leading centers (say, a Ryan Getzlaf), but he did record more hits than Vincent Lecavalier, Eric Staal, Sidney Crosby, Jonathan Toews, and Evgeni Malkin.

In what would become The Nightmare on Seventh Street against the Canadiens in the opening round of the playoffs, Backstrom still displayed an ability to be clutch and produce in numbers. In Games 1-4 he was 5-4-9, plus-8 with one of the Caps’ three game-winning goals. But then, his production disappeared (0-0-0, minus-1 in games 5-7, all Caps losses). The hint at what might have been the problem was reflected in one statistic. In Game 1-4 Backstrom had 20 shots on goal, while in the last three games he managed only seven shots. The problem might have been a shoulder injury suffered earlier in the series that incapacitated an important part of his game, one that was critical to the Caps’ success this season, his ability to relieve Alex Ovechkin of some of the goal-scoring burden.

Backstrom has improved consistently and measurably in almost every aspect of his game from last year to this. He is in the conversation when one ponders the top five centers in the game. It makes one wonder what sort of things we might be writing next year, when Backstrom is not yet 24 years old. Hopefully, one of the things we will be writing about is his being a critical cog in a Stanley Cup champion. Sign him, George!

Two years ago we wrote of Backstrom…

“Improvement and consistency. These are precisely the things one might ask for in a student. Nicklas Backstrom came a long way this year, and while he has a long way to go, he learned his lessons well."

We repeated the sentiment last year. Well, like clockwork, or his reliably being in the lineup and producing, it is once more the statement that seems an apt description of Backstrom’s season in 2009-2010.