The Peerless Prognosticator is ON THE AIR!!! -- Game 54: Capitals at Stars, February 13th

The Washington Capitals wrap up their three-game road swing through the Central Division on Saturday night when they mosey on over to Big-D to face the Dallas Stars.  The Caps are heading into this contest with a five-game winning streak, but they have been playing on a thin edge.  Four of the five wins were by one-goal margins, the other one featuring an empty-net power play goal for a two-goal win.

Meanwhile, the Stars, who had a rocky 3-6-2 January, are 4-1-0 so far this month.  Oddly enough, all four wins came on the road, while their only loss was at home to the Chicago Blackhawks (they redeemed themselves of that loss five days later with a 4-2 win in Chicago, their last contest before this one).

The Stars feature a formidable offense that scored four or more goals in each of their four wins this month and 18 goals overall in five February games.  The part that might cause some concern is that their defense and goaltending has been a bit leaky over those same five games, allowing 16 goals.  Special teams have followed a similar path, the power play humming along at 5-for-17 in February (29.4 percent) while the penalty killers are 13-for-16 (83.1 percent).

Seguin has been doing his damage in twos.  He has three two-point games in February.  And, he has been quite effective on the power play, recording four points on the five Dallas power play goals scored this month.  Seguin got off to an impressive start this season with 34 points in his first 24 games and 46 points in his first 34 games.  However, in his last 21 games he has cooled off, going just 9-5-14, although his good start in February suggests he might be returning to his earlier season form.  Seguin is 6-3-9, plus-1, in 16 career games against the Caps.

Then there is the matter of who will tend goal for Dallas.  Antti Niemi and Kari Lehtonen have split the minutes roughly 60-40 in Niemi’s favor, but there is no clear edge in their performance numbers.  Niemi has the better goals against average (2.52 to 2.79), but Lehtonen has the better save percentage (.912 to .908).  Niemi has more wins (20 to 15), but Lehtonen has the better winning percentage (.750 to .571).  Lehtonen took the decisions in Dallas' last two contests (both of them wins), stopping 81 of 86 shots (.942 save percentage).  Niemi opened the month with three appearances, winning two of them and stopping 50 of 59 shots (.847), and he was pulled for Lehtonen after giving up three goals on 11 shots in a 5-1 loss to Chicago on February 6th.  Niemi has never lost to the Caps in regulation, posting a 5-0-3 record with a 2.52 GAA and a .912 save percentage, with one shutout in eight appearances.  In 24 career appearances against the Caps, Lehtonen is 16-6-2, 2.56, .924, with two shutouts.  He was the goalie of record in the Stars’ 3-2 win over Washington last November, stopping 29 of 31 shots. 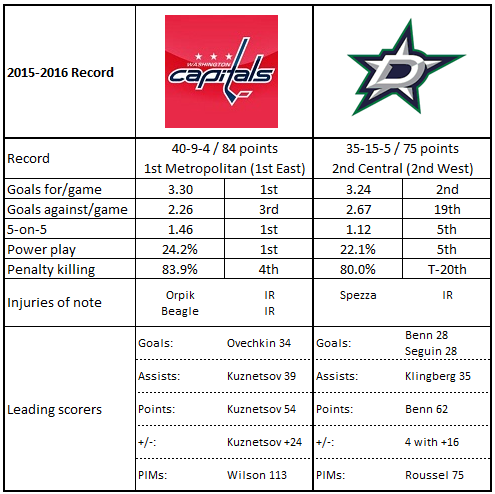 5.  The Stars rank third in the league in Corsi-for at 5-on-5 overall (53.4 percent) and are second in home games in that category (55.8 percent).  In five February games they are at 56.2 percent overall (numbers from war-on-ice.com).

4.  The Caps are the only team in the league to have scored more than 60 goals in two of the three regulation periods – 61 in the second period and 67 in the third period (second in the league in both categories).

5.  Washington is still stuck under 50 percent Corsi-for at 5-on-5 in road games this season (49.1), but overall in February they have been pretty good at 51.9 percent overall (home and road; numbers from war-on-ice.com).

It would not be faint praise to think of Dallas defenseman John Klingberg as a “poor man’s Erik Karlsson.”  Both hail from Sweden (Karlsson from Landsbro, Klingberg from Gothenburg).  They are just 27 months apart in age (Karlsson being older).  Both are primarily offensive defensemen.  Both followed similar early career trajectories (Karlsson was 18-53-71 in 135 games over his first two seasons; Klingberg is 21-65-86 in 120 games in his second season).  And, perhaps most important, they rank one-two in scoring among defensemen in the NHL, Karlsson first (11-51-62) and Klingberg second (10-36-46).  February has been kind to Klingberg, who is 4-2-6, plus-3, in five games, part of a longer run in which he has points in six of his last eight games (4-4-8).  He has three points (all assists) and is plus-2 in two career games against the Caps.

If it wasn’t for bad luck, Brooks Laich would have no luck at all (on the ice, that is).  In 52 games so far this season, Laich has one goal on 59 shots, the 343rd worst shooting percentage (1.7) among 350 forwards in the NHL appearing in at least 25 games and averaging at least 10 minutes of ice time a night. It actually goes back further, that single goal being his only one in his last 57 games dating back to last season.  One can understand slumps, but being tied with Paul Carey (one goal in four games) and Zach Sill (one in nine contests) is just plain dishwater dirty luck.  Players with Laich’s experience score more than that by accident, which, in fact, his lone goal this season sort of was, a redirect off his right skate of a Dmitry Orlov drive in a 4-1 win over the Boston Bruins on November 5th.  He is 0-4-4, minus-2, in ten career games against Dallas, but we’re going to go out on a limb and say he gets his first career goal against the Stars on Saturday night.

In a game pitting the top two scoring offenses in the league against one another and two of the top five power plays, this game will come down to defense and penalty killing, both of which favor the Caps.  Washington allows more than four-tenths of a goal less per game than Dallas (2.26 to 2.67), and their penalty kill is almost four percentage points better (83.9 percent to 80.0 percent).  That will be the difference as they achieve their third winning streak of six games or more this season. 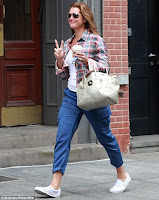 Winning streaks are funny.  You can see them coming when a team is on a losing streak, but they start playing better in advance of seeing their good efforts rewarded on the scoreboard.  Conversely, you can see the end of them coming when they are winning games while losing in their underlying numbers.  Such might be the case with the Caps here.  Mediocre possession numbers (even accounting for the third period edge for the Wild), poor results in the little things like faceoffs.  Let’s face it, this game turned on headwear…a hat trick.  Alex Ovechkin and Nicklas Backstrom (three assists, and he won 12 of 21 draws) had very good games.  The rest of the team, not as much.  They will have to do better when they head to Dallas for a game Saturday night against the Stars.
Posted by The Peerless at 6:34 AM No comments: