This morning the Capitals kicked off their 2009 rookie camp with a spirited two-hour session that didn’t lack for entertainment on a Labor Day Monday. It didn’t provide much in the way of hints about who’s up and who’s down, but it was something of a “get acquainted” session. As in, get acquainted with skating… lots of it. Some snippets…

Semyon Varlamov and Braden Holtby manned the nets for the inaugural session, Michal Neuvirth being held out of this one.

Let it be said that Kevin Schmidt was fingered to do the first lap of camp for being tardy to the chalkboard when called by coach Bruce Boudreau.

Joe Finley started the morning at forward, but he did not return to the ice after an intermission to resurface the ice. Apparently, he took an injury in the opening session.

Anton Gustafsson paid homage to Tiger Williams upon his return to the ice after the resurfacing intermission, riding his stick across the ice to the players’ bench. On the heels of that video he did a short while back, we're thinking YounGus lives in his own world.

Stefan Della Rovere did not appear in today’s drills, apparently nursing an injury of his own.

We took some snapshots of the proceedings, and here are some scenes… 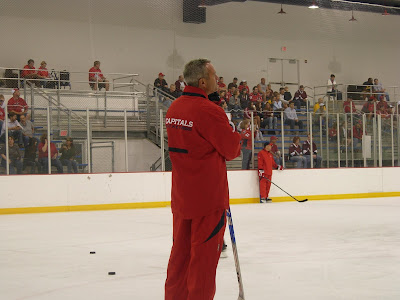 Coach Evason wondering why his number isn't hanging down at the other end with Labre, Hunter, Gartner, and Langway 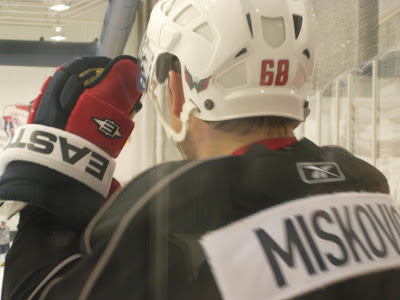 Zach Miskovic, wearing the equivalent of a "KICK ME" sign on the back of his helmet 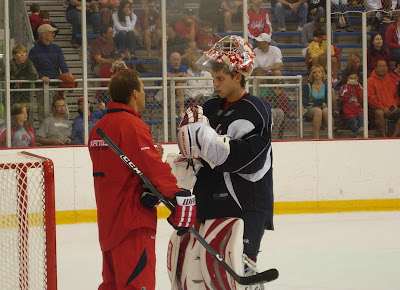 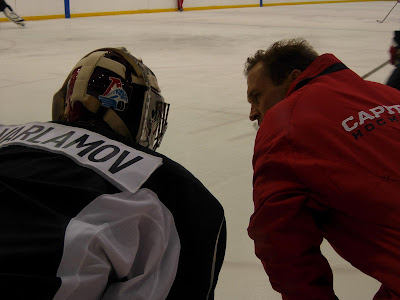 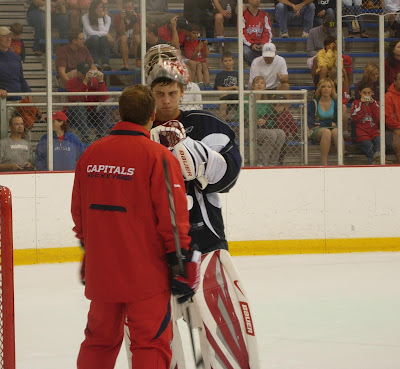 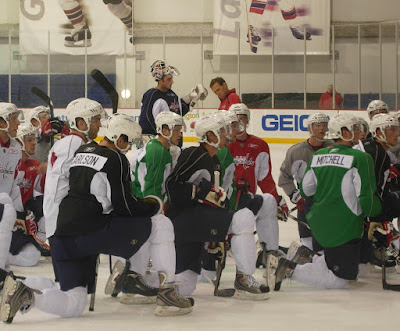 Your turn, Holtby...Archie seems to have that whole "hands on" thing down with the goalies. 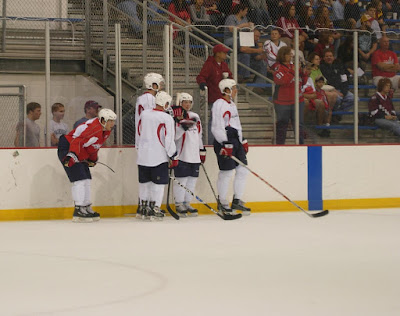 Joe Finley towers over his teammates...it was the last Finley sighting of the day. 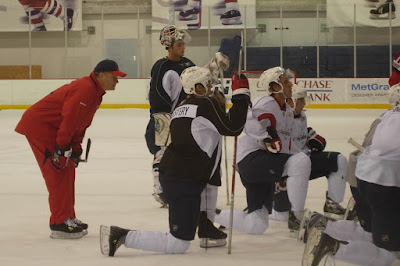 Coach Woods whispering..."oh, are you guys in for it in a few minutes..."

Why is John Carlson wearing Alexander Semin's gloves? Maybe he thinks he can find an extra dozen or so goals in them. 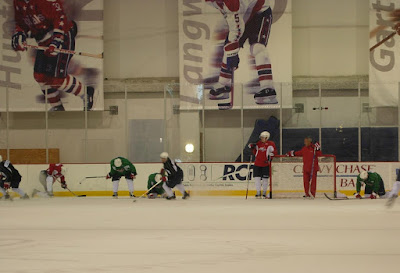 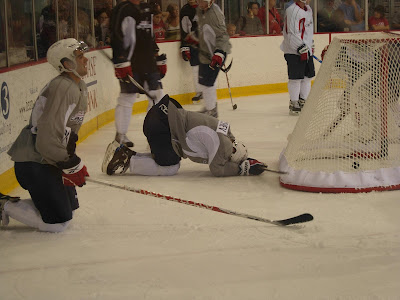 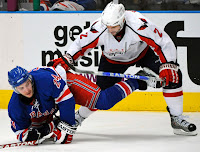 Last year, we didn’t do a preview on Brian Pothier. Not that such a thing matters in the larger world of hockey coverage, but in our little world it is an indicator of how far he’s come back from an injury that robbed him of more than a season's worth of games. And what the Caps are getting back is a decent contributor from the blue line, based on his per-82 game averages over his career. Pothier has had something of an odd career arc. He’s 32 years old, but he’s only played in 301 games in eight NHL seasons. Only twice in his career has he played in more than 55 games. In his first four seasons he split time between the NHL and the minors, and he lost parts of an additional two seasons to injury.

One might think that he is the NHL equivalent of the jalopy that the little old lady only drove to church on Sundays – low mileage. But there is the matter of his having lost 117 games in the last two seasons to the aftermath of a concussion suffered when he sustained a hit by Boston’s Milan Lucic. Even though much of the period of inactivity after the concussion was a result of a problem with his eyes, the concussion he suffered was the fourth of his career. He might be “low mileage,” but that doesn’t necessarily mean they aren’t hard miles.

But he did play respectably in his late season return, finishing with a goal and two assists in the last nine games of the regular season, and two assists and a plus-1 in 13 playoff games. He averaged more than 16 minutes of playing time in the 22 total games he played. This makes him something of a wild card full of questions. Will he play 70-plus games for only the third time in his career? Will he provide some relief for Mike Green on the power play? If he does play in 70-plus games, can he contribute at his career pace of production (6-22-28, +7 per-82 games)? Does his return make another defenseman (Morrisonn? Jurcina?) expendable in trade?

Fearless: Pothier has been pretty consistent in terms of his production on a year-to-year basis over the last two-and-a-half seasons before his concussion. There is no way he is – or should be on this team – the 24 minute a night player he was in his first year with the Caps. But getting 16-18 minutes a night is probably in his comfort range if he’s healthy. With that sort of ice time, 25 points wouldn’t be out of the question. And even if he isn’t the most physical defenseman on this team, he can probably be effective in a second or third pair role.

Cheerless: What’s up with these guys? Everyone was banged up when the season ended – Mike Green’s shoulder, Jeff Schultz’ ribs, Tom Poti and John Erskine each with a broken foot, and Pothier with questions about whether he can compete for a full season. Their deductible would keep me in beer for a couple of years (more like into mid-October). The Caps might need to keep eight defensemen as insurance, or seven and Alzner in Hershey.

Cheerless has a point. We know, whodathunkit? Last year, the top seven defensemen for the Caps – Green, Morrisonn, Jurcina, Schultz, Erskine, Poti, and Pothier – missed a combined 178 games. Pothier missed 73 of those games. He could return to be a 70-plus game player, but that is hardly a certainty, even if he’s pronounced as having a clean bill of health. Pothier is likely to open the season as the second oldest defenseman on the Caps roster (Tom Poti is 24 days older). But whereas Poti has over 700 games of NHL experience, Pothier’s 301 games is almost 50 fewer career games than Shaone Morrisonn (26 years old), and fewer than 30 more games than Milan Jurcina (26) and John Erskine (29).

Stepping right in after losing so much time to injury and playing every night seems like a stretch for Pothier, and there is the matter of a player like Karl Alzner pushing for more time. His role might be a bit limited by his own circumstances and perhaps eight defensemen competing for time. In any case, for Pothier a “sweet return” is not the stuff of Paradise Lost, from which the line above is taken, but perhaps what he might contribute to next spring – a deep playoff run.