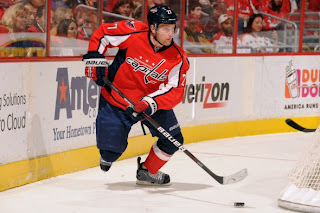 Theme: “A man who lacks reliability is utterly useless.”
-- Confucius

When you dive into Karl Alzner’s statistics for the 2011-2012 season, it becomes evident rather quickly that the adjective to describe him is “reliable.” Of 198 defensemen playing in 40 or more games last season, only six faced a higher quality of competition than did Alzner at 5-on-5. Only eight had a higher Corsi value relative to quality of competition. He had a lower goals against-on ice per 60 minutes than either Shea Weber or Ryan Suter. None of them had a lower share of offensive zone starts than did Alzner (all rankings from behindthenet.ca). Among Caps defensemen Alzner he faced both the highest quality of competition and had the lowest share of offensive zone starts (hockeyanalytics.com).

And although it was an improvement over the 2010-2011 season, it wasn’t as if Alzner ranked much lower in the previous season – 22nd in quality of competition (of 198 defensemen playing in at least 40 games), 16th in Corsi relative to quality of competition, 25th in goals against-on ice per 60 minutes.

What he is not going to provide – or at least has yet to provide – is much offense from the blue line. His 1-16-17 finish last season was a career high in points, and in fact he recorded points in each of his first three games last season. But he recorded points in consecutive games only twice more in the last 79 games of the season. If there is a bright spot there, the three instances of scoring points in consecutive games were the first time he had done that since he did so in his fifth and sixth career games in his first season, in 2008-2009 (the only time he had done it in his career until last season).

What he does provide, though, is a relentless brand of reliability. You may take the plus-minus statistic with a grain of salt, but consider that in no season in which Alzner has played in more than 30 games (dating back to 2004-2005) has he finished in minus territory. Whether he was playing for the Calgary Hitmen in juniors, the Hershey Bears in the AHL, or the Capitals, he has been in plus territory. Coincidence? Perhaps, but then again, he is a common denominator among those teams.

He also has an uncommon reservoir of patience. After dealing with this after a three-overtime loss, taking the time to make the right play might be child's play.

Not to get ahead ourselves, cousin, but the “big question” you asked last season was whether Alzner could be the shutdown defenseman over 82 games. He now has consecutive seasons having played in all 82 games, and the numbers you cited above certainly indicate he answered that question in the affirmative last season. In fact, he has come a long way from even just two seasons ago, in which (as you pointed out last year at this time) he was coming off an abbreviated season in which his underlying statistics were not all that impressive.

That wasn’t the whole “big question” last year, cuz. Peerless here asked if Alzner could be the shutdown defenseman “and more.” He’s got the shutdown thing working, but what is the “and more?” Here is another comparison. Peerless mentioned that there were only six defensemen who played in at least 40 games and faced a higher quality of competition than Alzner. Two of them were Dan Girardi and Ryan McDonagh of the New York Rangers. Girardi had 29 points last season (5-24-29), and McDonagh had 32 (7-25-32). It would be nice if Alzner could chip in a little more from the blueline.

The Big Question… Will Karl Alzner be among the biggest “values” among defensemen this season?

If you look at comparables at the capgeek.com Web site, you will find a lot of names that the casual fan – and, we dare say, a fair number of regular fans – would not recognize. Chris Butler, Kevin Klein, Theo Peckkham, Raphael Diaz, Brian Lee among them. Alzner represents a scant 2.0 percent of the current salary cap. Of the 21 Capitals skaters currently under contract, only eight have lower cap hits, and he is sixth of eight defensemen in cap hit (Dmitry Orlov and Jack Hillen are lower). Given Alzner’s growing ability as a shutdown defenseman, he might be the biggest value at the position in the league today.

It is hard to believe that Karl Alzner will not be 24 for another couple of weeks. He already is among the league’s best in a defensive role. And even though there are some (uh, Cheerless?) who might ask if Alzner could contribute more on offense, the Caps should be able to muster offense from the likes of Mike Green, John Carlson, and perhaps even Dmitry Orlov from the blue line. What the Caps do not have is another defenseman of the reliably consistent sort as Alzner. He had only 22 “minus” games all of last season, only three in the last 16 as the Caps were fighting for a playoff spot.

The Caps would be better served if Alzner just continued to play within himself, providing that defensive stopping ability he has displayed over the past two seasons. If that means scoring a goal every 50 games or so (roughly what he has averaged over the past two seasons), that is hardly a high price to pay to ensure that he be that reliable player in his own end. And that makes Karl Alzner an extremely useful player in the Capitals’ scheme of things.