A night in the life of Michal Neuvirth 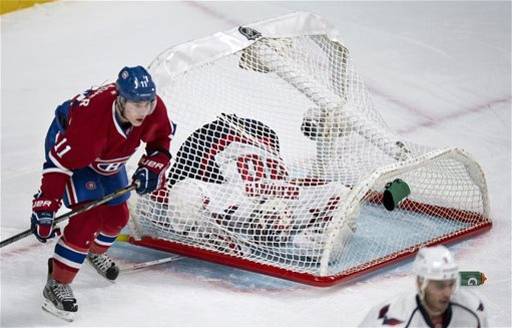 Effective as it might be, the NHL rules frown on adjusting the positioning of nets to aid goaltenders in defending shots. 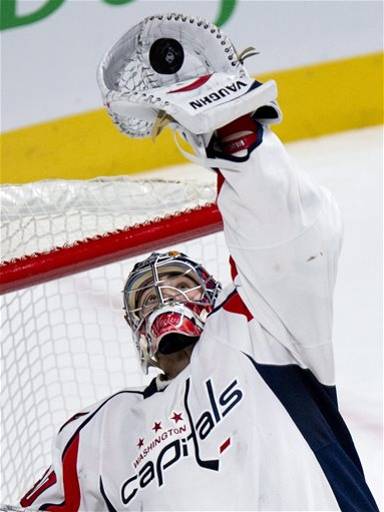 Infield fly rule is in effect! 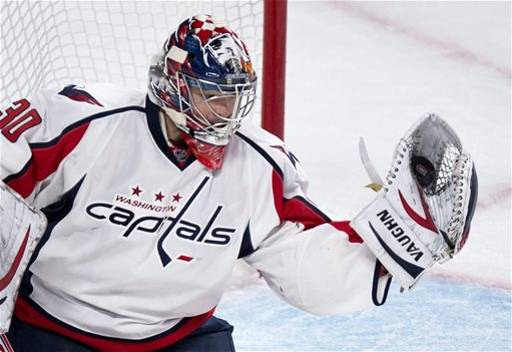 Photos: The Canadian Press, Paul Chiasson
Posted by The Peerless at 7:01 AM No comments:

One game does not make a trend, but for last night the hockey intelligentsia could not dismiss the recent record of the Washington Capitals as being the product of beating up a collection of patsies.  No, last night the Capitals spotted the Montreal Canadiens a goal at Bell Centre, then scored three unanswered goals before allowing a late tally in what would be an impressive 3-2 win over the Northeast Division leading Canadiens.

The win was the Caps ninth in their last 11 games (9-1-1), allowing them to maintain their two point lead over the Winnipeg Jets in the Southeast Division.

It looked as if it might be a frustrating night for the Caps as they dominated the early going, outshooting the Canadiens by a 9-0 margin in the first six minutes, but not having anything to show for it.  The frustration was compounded late in the first period when it was the home team that scored first on a play that featured the Canadiens’ speed.  Alex Galchenyuk took a feed at the Montreal blue line and sped up the left wing.  At the Capitals’ line he darted to the middle past defenseman John Carlson and in on goalie Michal Neuvirth.  The puck slid off Galchenyuk’s stick to the end wall, but Brandon Prust was there to backhand the puck in front to Lars Eller coming late down the middle.  Eller stuffed the puck past Neuvirth with Troy Brouwer standing a stick length away (but watching the play behind the net), and the Canadiens had a 1-0 lead that they took to the first intermission.

It was the Caps, though, who would turn the game around in less than two minutes in the first half of the second period.  The first one came on an old formula made new.  Nicklas Backstrom skated the puck out of the Capitals’ end, feeding John Carlson at the red line.  Carlson skated down the middle, then flipped a backhand pass to Alex Ovechkin at the Montreal blue line.  Ovechkin cut to the middle from the right wing, then wrong-footed a wrist shot that beat goalie Carey Price for the tying goal 7:50 into the period.

The Caps took the lead less than two minutes later on a play that was equal amounts hard work and good bounces.  The Caps were throwing pucks in the general vicinity of the Canadiens’ net – first Jason Chimera, then Steve Oleksy – but the pucks were sliding through with no damage done.  However, the Caps were able to maintain control of the puck in the Montreal zone where it came to rest on the stick of Jack Hillen.  The Caps’ defenseman wristed what seemed like a harmless shot at the Montreal net.  Eric Fehr nicked the puck with his stick as the puck was sailing by, and it hit Price in the chest… then his right arm… then tumbled over his back… then off his left skate… and in.  The Caps had a lead they would not relinquish.

Hillen got his own goal – his first with the Caps – in the third period on what was a case of “if at first you don’t succeed, try, try, again.”  Well, “try” once more, anyway.  Hillen fired a puck from the top of the zone with a clot of bodies in front of him, hoping to find a hole. The puck hit Nicklas Backstrom in front without getting through.  Marcus Johansson managed to return the puck to Hillen, who fired again.  This time the puck found its mark, sailing all the way through and past Price before the goalie had a chance to find it through the maze in front of him.  The Caps had a 3-1 lead 5:33 into the final period.

The Caps clamped down from there, allowing few opportunities over the next ten minutes, but Montreal did halve the deficit with less than four minutes left when Eller scored his second goal of the game on a deflection of a Nathan Beaulieu shot from the left point.  That was as close as the Canadiens would get, and the Caps skated off with a win against a team that was certainly no palooka, 3-2.

-- If you are counting – and if you are a Caps fan, you are – Alex Ovechkin’s goal in the second period makes six in his last three games, ten in his last seven, and 16 goals in his last 13 games.  That would be a 101-goal pace over 82 games.  Steven who?

-- And while you are sitting there counting things, Nicklas Backstrom’s two assists make 11 helpers in his last five games and 17 in his last 13 games.  That would be a 107-assist pace.

-- Steve Oleksy had an assist, too.  This might not be a news-maker, although he did end a seven-game streak without a point, but it makes six assists for the in-season call-up from Hershey.  That ties him for third on the team behind only Mike Green and John Carlson.  And, his plus-7 trails only Nicklas Backstrom and Eric Fehr (both at plus-8) for the team lead, despite playing in only 20 games this season for the Caps.

-- A goal and an assist for Jack Hillen makes two straight multi-point games, the first time in his career he accomplished that feat.  The power of new babies!

-- It is not often that Ovechkin, as big a hitter as he is, will have more than twice as many hits as shot attempts, but there it was.  He had eight hits for the night, three shot attempts (two on goal, one in the net).

-- Wolski sighting!  Wojtek Wolski got a sweater.  This in itself was an achievement since he has played in only three games since March 12th.  But, eight shifts was his low for the year.  He had one shot attempt (miss) and one hit to go on his scoresheet.

-- The Caps were credited with more blocked shots (34) than the Canadiens had shots on goal (29).  The “Johns” – Erskine and Carlson – had almost half of them, splitting 14 blocked shots evenly between them.

-- We said in the prognosto that…

"At this point, the only hope the Caps seem to have to keep from being scored on when on the penalty kill is to stay out of the box entirely.  And Montreal has the league’s seventh best power play at home.  If the Caps have more than three shorthanded situations to face tonight, it would not seem that this game would end well for the visitors."

The Canadiens had one inconsequential power play opportunity, that to start the second period.

-- The Caps had good balance on their shots on goal.  Finishing the game with 27 is not a high total, but 13 skaters hit the score sheet, and none had more than three.

-- It might not be in time to restart a goalie controversy, but Michal Neuvirth has turned in two solid performances in a row since he spent three weeks on the shelf.  With 27 saves on 29 shots, that makes 55 saves on 59 shots in two games, a .932 save percentage.

The Caps are 10-2-1 in their last 13 games now.  Yeah, they beat a lot of also-rans along the way, but it is also true that they are 7-0-1 in their last eight road games, and that includes wins in Madison Square Garden, and now Bell Centre.  These are not easy places for visitors to grab two points.  The five-game winning streak extends their season’s longest such streak, and it is the Caps’ longest winning streak since opening the 2011-2012 season with a seven-game run.

There is yet a minefield to navigate over the last eight games of the regular season with games against Toronto, Boston, twice against Ottawa, and a return trip to Bell Centre.  But the Caps have put themselves in a position to win the Southeast and a third-seed for the playoffs.  It is something they earned by knocking down the teams in front of them, whether they are woeful or wonderful.  Two points is two points, and this isn’t the Beauty Contest System of college football where teams are ranked, in part, based on strength of schedule.

Still, this was a quality win against a quality opponent.  Attention should be paid.