Down the Home Stretch: April 1 Update

Not much has changed since the last update.  All three contenders for the two wild-card playoff spots won last night.  The last ten days will be a nail-biting exercise, especially since the Caps now go on the road for three treacherous games. 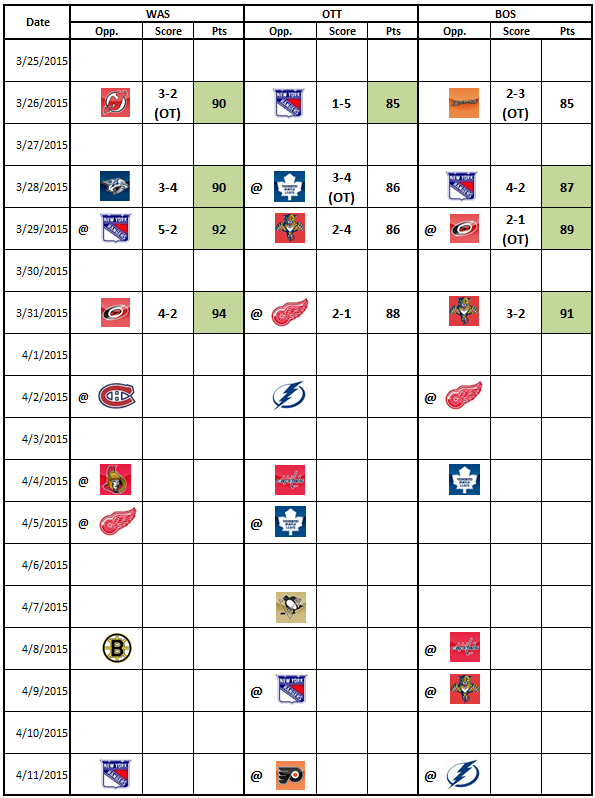 Posted by The Peerless at 6:50 AM No comments:

It was a record-setting night at Verizon Center on Tuesday as the Washington Capitals doubled up on the Carolina Hurricanes, 4-2.  The immediate concern for the Capitals was to maintain their edge over the Boston Bruins and the Ottawa Senators for one of the two wild card spots in the post season, and the win allowed the Caps to keep pace with both of their pursuers, each winning their own game on Tuesday night.

It was made possible in part by Alex Ovechkin, who scored his 50th goal of the season in the first period and who added an assist on an insurance goal in the second period.  It got started, though, in the game’s third minute on a fluky play.  Mike Green chipped a puck from the low slot in front of his own net to get the Caps started up ice on a three-man rush.  Curtis Glencross took the Green pass and moved it to Tom Wilson on his right exiting the Caps’ zone.  Wilson fed the puck back to Glencross, who relayed it to Green filling in on the left.  Green skated down the left wing wall and from the far edge of the left wing circle threw a pass in front of the Carolina net.  The puck did not reach its intended target, instead clipping the skate of Hurricane defenseman Justin Faulk and bending past goalie Cam Ward to give the Caps a 1-0 lead just 2:46 into the game.

Less than nine minutes later it was record-setting time.  Matt Niskanen started the Caps out of their end with a pass to Evgeny Kuznetsov skating up the middle.  Kuznetsov skated through center ice, backing off the Carolina defense until he entered the offensive zone.  From the middle he backhanded a pass to Alex Ovechkin skating down the left wing.  The puck was muffled by the stick of Alexander Semin, but it only had the effect of teeing up a wrist shot by Ovechkin that beat Ward cleanly to the far side.  The goal was Ovechkin’s 50th, the sixth time in ten seasons he reached that mark, the sixth player in NHL history to score 50 or more goals in a season six or more times.

It might have been the start of a rout for the Capitals, but Carolina escaped the first period without any further damage done.  Then, the Hurricanes did some damage of their own by dominating the first half of the second period.  Nathan Gerbe halved the Capitals’ lead five minutes into the period.  Gerbe and Alexander Semin were off on a 2-on-1 break that looked as if it fell apart when Semin skated the puck in too deep to the left of goalie Braden Holtby.  Semin tried to reach back and stuff the puck past Holtby from below the goal line, but the puck slid out the other side to Gerbe low on the left side.  Gerbe snapped a backhand past two Capitals skaters trying to cover for Holtby, who was sprawled at the post on the far side, and it was 2-1.

Eric Staal tied the game in the 11th minute by slamming a rebound of a Chris Terry shot past Holtby, and things were getting quiet at Verizon Center.  Carlina could not get the lead goal, though, and it was the Caps to stole the momentum in the last half of the period.  Jason Chimera collected a loose puck at the Carolina blue line with speed.  As he skated down the right wing wall he flicked a backhand pass past defenseman Brett Bellemore to the front of the Carolina net.  Brooks Laich, skating hard to the front of the net, got to the top of the crease just in time to redirect the puck past Ward at the 17:06 mark to give the Caps the lead they would not relinquish.

Washington was not done, though.  Less than 90 seconds later the Caps scored on what looked like an instant replay of the Laich goal.  This time it was Ovechkin collecting the loose puck at the Carolina line and skating down the right wing wall.  As he sped down the flank he sent a pass across and through three Hurricane defenders to the far side of the Hurricane crease.  Bellemore was the third Hurricane defender on that play, and it looked as if he would be able to stop the pass with his stick, but the puck was left between his skates.  Joel Ward pounced, poking the puck from between Bellemore’s skates and past Ward to make it 4-2 with just 1:32 left in the period.

After that, the Caps were in lock down mode against the Hurricanes for the third period.  They managed only one shot against Ward in the final 20 minutes, but they allowed only five shots to reach Holtby, none of them finding paydirt.  The Caps skated off with a 4-2 win and maintained their three-point lead over the Boston Bruins for the first wild card playoff spot.

-- Alex Ovechkin joined Wayne Grertzky, Mike Bossy, Marcel Dionne, Guy Lafleur, and Mario Lemieux as the sixth player to record six or more 50-goal seasons in a career in the NHL.  His goal was his 472nd of his career, tying Peter Bondra for the franchise record.  He did it in his 755th game, an average of 51 goals per 82 games over his career.  Bondra scored his 472 goals in 961 games, an average of 40 goals per 82 games in setting the record.

-- Ovechkin’s assist on Joel Ward’s goal was his 419th as a Capital, passing Michal Pivonka for second place in franchise history.  Nicklas Backstrom is the franchise record-holder with 422.  The two points he recorded left Ovechkin tied for second in the league scoring race with the New York Islanders’ John Tavares and two points behind Pittsburgh’s Sidney Crosby for the league lead.

-- The win was the Caps’ 38th in regulation or overtime, tying them with the Islanders and the Penguins for second in the Metropolitan Division behind the New York Rangers (44).

-- Tim Gleason was a plus-3 in his first appearance against his old club, the first time this season he reached a plus-3 for a single game.  It was the first time he was plus-3 or better for a game since going plus-3 for Carolina in a 5-3 loss to the Philadelphia Flyers on April 20, 2013.

-- Mike Green was a plus-3, he reaching that mark for the first time this season as well.  His last plus-3 effort also came against the Philadelphia Flyers and also came in a loss, a 5-4 overtime loss to the Flyers last March 2nd.

-- Braden Holtby won his 38th game of the season.  He stands alone with the second-highest win total for a goaltender in franchise history.  Only Olaf Kolzig (41 in 1999-2000, a Vezina Trophy-winning season) stands in front of him.  Holtby is within two wins of 100 for his career.

A good win, a necessary win, a win that a team trying to fend off playoff challengers needs to have against an also-ran opponent.  It was not as convincing a win as that over the Rangers on Sunday, but Carolina is not quite as bad as their record, either, being a better possession team than their wins and losses would suggest.  What the Caps had that the Hurricanes did not was, of course, the guy who scores 50 goals as a regular occurrence on his resume.  They also did not have a defense that could clamp down when need be as the Caps did in the third period.

Things will get harder for the Caps now, as they face five opponents in their last five games that are either in the post season or fighting for position.  And, they get to go on the road for three games to try to clinch one of those last spots.  Hey, you didn’t think this would be easy, did you?