Questions: Deal or No Deal?

There is a lot of talk in Caps Nation these days over whether or not a shakeup is needed on the roster to shake off the spell of early playoff round failures that have beset the Caps the past four years. Much of the talk centers on whether it is a good idea to trade defenseman Mike Green.

It is hard to come to a clear answer to the question, “deal or no deal?” Some point to his age (he will turn 26 early in the 2011-2012 season) and position, and wonder if there is still an untapped level of performance for a player who mans a position that usually requires a longer lead time to maturity. Others point to his early-career production and conclude that he has peaked in his offensive production, that he will skate along the path of others before him – a drop in production followed by some increase later, but not to the heights of his early years  – making a long term, high-dollar contract of limited value, thus suggesting that trading him now is the best bet for the Caps.

Well, the Caps themselves have been down a similar road before. An “offensive,” puck-moving defenseman accused of having some issues in his own end, who might not be as physical a defensive presence as fans might like, who had some playoff performance issues. 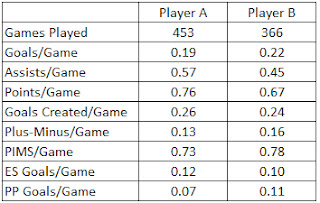 Spooky, isn’t it? Well, it gets better when you compare the playoff performance of these two players over that same relative span: 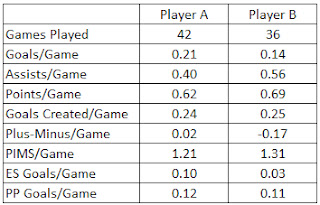 We will stipulate to all the questions about this kind of comparison – players of different eras, different styles played in those eras, comparing a current player to only one other player, even different contract circumstances (Green will be a restricted free agent after next season; Player A played before the onset of broad free agency rights).

But the age and productivity of the two players are reasonably similar, the big difference being the concern over Green’s durability (he missed 54 games over the past three regular seasons). Still, we do not see the matter of trading Green as a slam dunk in favor of the proposition. And his playing a position that is a virtual requirement for post-season success (solid-top-four defensemen being almost a prerequisite these days) leads us to believe that, all other things equal, keeping Green is the way to go. Of course, the matter of the next contract past next season will weigh heavily in any decision, and that has to be a factor. A Mike Green at a $5.2 million cap hit is one thing. A Mike Green at a $6.5 million cap hit is another matter.

Still, we think the comparison useful, if only to point out the perils of letting a player go – especially at this position – too early. For you see, “Player B” is indeed Mike Green.

“Player A” is Larry Murphy…yes, that Larry Murphy, the one "whooped" out of town, who went on to play with four Stanley Cup winners and who has a bust in the Hall of Fame.

Whoop at your peril.
Posted by The Peerless at 11:03 AM 5 comments:

A couple of years ago, we came up with this scribble on realignment, but with the Thrashers now looking like the second team from that city to head off to western Canada, well... 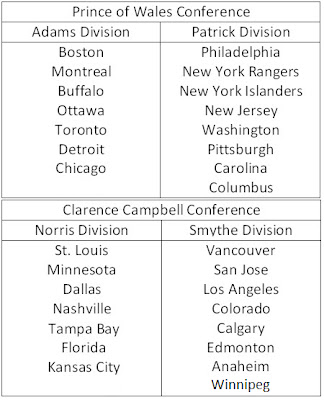 Oh, yeah...we're thinking Phoenix is a goner, too, but that comes later.  Just planning ahead.  And just like last time...you got a beef?  Blame Cheerless or Fearless.

But for the life of me...how does a group calling itself the "Atlanta Spirit" merit the name when it seems to expend more energy trying to rid itself of the Thrashers than making them a contender?
Posted by The Peerless at 7:12 AM 1 comment: