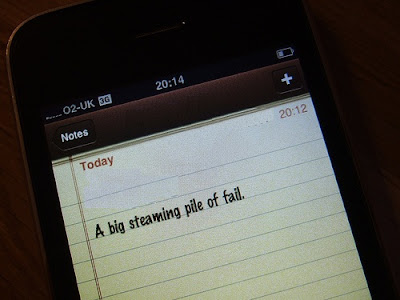 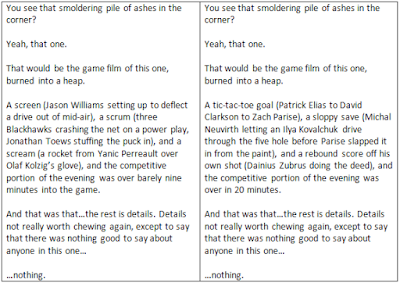 Two games… one in March 2008, the other in March 2012. Both ugly 5-0 losses. One to the Chicago Blackhawks, the other – last night – to the New Jersey Devils. Both with the potential to stick a dagger in the Caps’ playoff hopes. But…

With last night’s loss in Game 64, the Caps find themselves in ninth place in the East, one point behind Winnipeg for eighth place in the conference and three back of Florida for the Southeast lead.

Still…there is that stink that hovers in the air about this loss to the Devils. Things that had been going well, even if only over a three-game winning streak, went ‘poof’…

-- The Caps allowed as many goal in this one (five) as they did in the three games of the winning streak combined.

-- The Caps scored 11 goals in the three-game winning streak; they managed only 23 shots in this game.

-- Alex Ovechkin had two goals on 12 shots in the three wins…he had only one shot on goal last night, that one not coming until the 15:34 mark of the second period, by which time the Devils had completed their scoring for the evening and had their 5-0 lead.

-- The Caps were perfect on the penalty kill in the three games – 11-for-11. The Caps allowed a power play goal on the first shorthanded situation they faced last night.

-- The Caps had only three players finish with a “minus” in any of the three games (Dennis Wideman was minus-1 the 4-2 win over Toronto, and both Matt Hendricks and Jeff Schultz were minus-1 in the 3-2 win over the Islanders). Fourteen of 18 skaters finished on the minus side of the ledger last night.

In the end, there are two ways to look at this loss. There is the matter of the Caps bifurcated home and road performance this season. The Caps were 21-8-2 at home going into last night’s game, 11-18-3 on the road. That suggested a need to make hay while the sun shined – or the lights were on – at Verizon Center. That the Caps did not come out with a win puts more pressure on their ability to earn points on the road. And that road schedule is a killer with seven of nine remaining road games against teams ahead of the Caps in the standings and another one of them against a team breathing down their necks for ninth place (Tampa Bay, currently three points behind the Caps).

On the other hand, there is that history. The 5-0 loss to the Blackhawks in 2008 ended a four-game winning streak by the Caps and was followed by a seven-game winning streak to end the season. It was a hiccup along the way to a furious finish. And that team was in a tougher spot in the standings than this edition of the Caps.

What it means is that, well, who knows? It is two points that the Caps should have and needed to have had. They cannot go giving away points on home ice to teams flying in after a game the night before. On the other hand, it was two points (this isn’t wrestling; you don’t get more points for a superior decision). They were never in the game. It might have been more frustrating if the Caps had played it closer and lost it late. It would have felt more like two points that got away. These were two points they were never close to getting.


* Footnote…in that 5-0 loss to the Blackhawks in 2008? The player Caps fans these days love to hate – Rene Bourque – scored the fifth goal in that game for Chicago.
Posted by The Peerless at 7:16 AM No comments: