The Peerless Prognosticator is ON THE AIR!!! -- Game 68: Capitals at Sharks, March 12th

The Washington Capitals wind up their four-game road trip on Saturday night when they visit San Jose to meet the Sharks.  This game will complete the season series between the two clubs, who have not met since San Jose pummeled the Caps, 5-0 in Game 2 of the season back on October 13th.  Since then, the clubs have taken very different routes to this meeting.

Washington shook off the loss to San Jose, won five games in a row, and never looked back.  The Sharks on the other hand, stumbled around for a while before finding their footing.  A recently as January 7th they were a .500 team, dropping to 18-18-2 after a 2-1 loss at home to the Detroit Red Wings.  Since then, however, the Sharks are 19-6-4.

Brent Burns leads the Sharks in points over the club’s last seven games (4-5-9), a run that has lifted him into second place in total scoring among defensemen and first in goals (24-36-60).  He is another one of those defensemen who consume huge chunks of minutes (26:11 per game, seventh among defensemen) and who does it in long shifts (56 seconds per shift, second highest in the league among blueliners).   Burns is something of a hybrid as a defenseman in the same fashion as Winnipeg’s Dustin Byfuglien, player who can play (and has played) forward.  He has already posted career highs in goals and points this season, and he has been hard on the Caps, going 4-5-9, even, in 11 career games against Washington.

Goaltender Martin Jones is in his first season with the Sharks after spending two years with the Los Angeles Kings in limited duty.  His 33 wins already ranks him seventh in wins in club history (27 goalies having played for the Sharks), and he has the best save percentage (.918) of any of the 12 San Jose goaltenders to appear in at least 50 games with the club.  In his last 13 appearances, Jones is 9-3-1, 1.83, .935, with one shutout.  He pitched a 31-save shutout in the 5-0 win in Washington on October 13th, his only career appearance against the Caps. 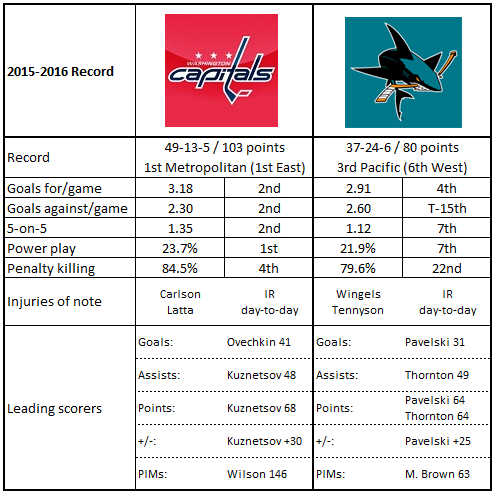 2.  The Caps are tied for having the tenth-highest number of first period goals allowed this season (53, with Columbus and Pittsburgh).

“The Big Cheese” is having a fine first season with the San Jose Sharks after spending four seasons in Washington.  With 17 goals and 36 points in 65 games (0.26 goals/game, 0.55 points per game) he has improved on the per-game averages he posted in four years with the Caps (0.21/0.44).  But he is in something of a slump at the moment, going without a point in his last eight contests.  However, he does not appear to be a difference maker as a point-producer.  San Jose is just 14-10-4 in games in which he recorded a point this season.  He does not have a point in five career games against the Caps.

When Jason Chimera scored an empty-net goal on February 16th in a 3-1 win over the Los Angeles Kings, it was Chimera’s third goal in four games, and with 16 goals in 55 games he was on a pace to record a career-best level in goals scored.  Since then, Chimera has one goal in his last dozen games, and he comes into this game without a goal in his last eight games.  It ties his longest streak of the season without a goal, two streaks of which he endured in the 2015 portion of the season.  In this streak, his shooting has dried up.  Chimera has just six shots on goal in this eight-game streak, half of them coming against Pittsburgh on March 1st.  He does not have a shot on goal in any of his last three games.  Chimera is 6-4-10, minus-6, in 33 career games against the Sharks.

Over the course of their history, Horace Greeley’s advice to “go west, young man,” was more a case of “go west, and lose” when it came to trips to California for the Caps.  That was not the case in the two seasons preceding this one, the Caps going 2-0-1 in 2013-2014 and then going 2-1-0 last season on their California trip.  To make it three straight years in winning two out of three, the Caps will have to win in a city that has been especially unkind to them.  While they have won both of their most recent games in San Jose – 3-2 in a shootout two years ago and 5-4 in overtime last season – the Caps have not won a game in regulation time in San Jose since October 1993.  This has been a season in which old records fall, and in this it should be no exception.

Posted by The Peerless at 7:28 AM No comments: