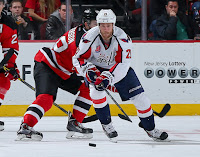 “Here is the rule to remember in the future, When anything tempts you to be bitter: not, 'This is a misfortune' but 'To bear this worthily is good fortune.'”
-- Marcus Aurelius

For five seasons, from 2007-2008 through 2011-2012, one Washington Capitals player recorded a total of at least 100 goals, at least 200 points, at least 35 power play goals, and at least five shorthanded goals: Brooks Laich.  Over those five seasons, Laich missed a total of four games, the 406 games in which he appeared being 16 more than the second-highest number on that list, 390 by Ovechkin.  He was the jack-o-all-trades, the player who fit into any situation, so much so that he could be employed as a defenseman in a pinch.

Then, following a troublesome and persistent problem with groin injuries, he appeared in just 60 of 130 regular season games the next two seasons, recording a total of nine goals and 19 points, only one of those goals on a power play and one of them shorthanded.  He was a shell of his former self.

However, after treatment and surgical procedures to correct a sports hernia and a “tight adductor,”  He came into the 2014-2015 season in perhaps the best health he enjoyed since the 2011-2012 season.

That lasted five games.  In his last shift of the October 18th game against Florida, Laich took a hit from Shawn Thornton in the left shoulder.  He missed 15 of the team’s next 16 games, returning only for the Caps’ 3-2 win in Chicago on November 7th.

Laich returned to the lineup for good, in a manner of speaking, on November 28th against the New York Islanders.  Over the first six games after his return, Laich recorded three goals and an assist.  It looked as if the time off gave him a chance to repair, but a seven-game streak without a point left him 3-2-5, minus-1, after 22 games.

It looked as if Laich was starting to right his ship when he broke his scoreless streak with a 2-2-4 run over five games to end the 2014 portion of the season and start the 2015 portion.  He could never get into a rhythm, however, and he managed just one goal over his next 36 games.  Another flurry, this time a three-game stretch in which he went 1-3-4, including a game-winning goal in a 4-2 win over Carolina on March 31st, would end his scoring for the season.

Even with a return to better health, Laich’s production was disappointing.  His goals per game was his lowest for a full season (0.11) since his 2005-2006 rookie year.  His points per game was insignificantly better (0.30 per game) than his 2013-2014 result (0.29) and was far off the totals of his heyday when he posted points-per-game averages of half a point per game or better in four of five seasons. 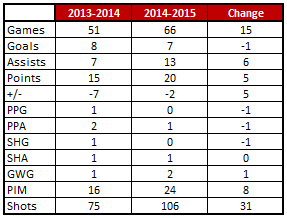 Cheerless’ Take:  You done, cuz?  Laich was 12th of 14 Caps forwards playing in at least 20 games in shot attempt plus-minus.   He was 11th among those forwards in shot attempts/on ice relative to shot attempts off ice per 60 minutes.  He was 12th in shot attempts/for percentage.  He played at least 100 5-on-5 minutes with four other forwards, and three of them had better Corsi-for percentages apart from him than they had with him.  And in terms of results, the Caps were 20-7-7 in games in which Laich skated 15 or more minutes (1.38 standings points per game), 19-11-2 in games in which he did not (1.25).  It does not look all that significant.

Odd Laich Fact:  Brooks Laich recorded a goal in his only trick shot attempt this season, extending his personal streak of successful attempts to four.  The last time he was unsuccessful was December 23, 2010, in a 3-2 Gimmick loss to the Pittsburgh Penguins.

Game to Remember: December 6th versus New Jersey.  It took a while for Brooks Laich to appear in ten games, having suffered that upper body injury against Florida five games into the season.  It was his 11th, in New Jersey against the Devils that would be more memorable than the first ten.  Jay Beagle had just given the Caps a 2-1 lead nine minutes into the second period when Eric Gelinas took a holding penalty against Marcus Johansson.  On the ensuing power play, Laich fed Evgeny Kuznetsov along the right wing wall, then headed for the net.  Kuznetsov stepped out, lined up a shot, and using Laich as a screen fired the puck over goalie Cory Schneider’s left shoulder to make it 3-1.  It was Laich’s 300th point in the NHL.  For good measure, he added an empty net goal in the Caps’ 4-1 win.

Game to Forget:  April 4th versus Ottawa.  The Caps were on a three-game winning streak when they visited Ottawa in early April.  Brooks Liach had just had a three-game points streak stopped in the Caps’ 5-4 win in Montreal before facing the Senators and was looking to get back on a scoring roll.  Not only did Laich not return to the score sheet, he skated only two shifts in the third period in finishing with just 8:46 in ice time, his lowest of the season and his lowest in 179 dating back to February 2012 when he finished with just 9:46 against the San Jose Sharks.

Brooks Laich had a respectable 1.61 shots per game during the regular season, but in 14 games he managed only 15 shots on goal.  He did not have more than two in a game after recording four in Game 3 of the opening round against the New York Islanders.  He did not record a point in the postseason after lighting the lamp in Game 5 against the Islanders, a 5-1 Caps win.  The two points he recorded was his lowest output in a postseason in six appearances.

It is not as if Brooks Laich had a terrible year.  Perception of his season is going to be colored by the burden his contract places on the salary cap.  One cannot help but think the Caps are not getting their money’s worth when Jay Beagle ($900K cap hit) has ten goals to the seven that Laich ($4.5M cap hit) had, or when he was getting less even-strength ice time (12:09) than Eric Fehr (13:16 with a $1.5M cap hit).

The hopeful perspective is that Laich needs a full off-season to finally get back to 100 percent after years of persistent health problems.  The less hopeful one is that he will be turning 32 in a couple of weeks, and one wonders if it is an “old” 32, worn down by those same persistent injuries.

Laich had borne quite a burden over the last several years and endured it with as much optimism and good spirit as one could expect.  He has two years on his current contract, though, and it remains unclear whether that will be a value or a burden to the club.  The 2014-2015 season offered little clue as to which it might be.